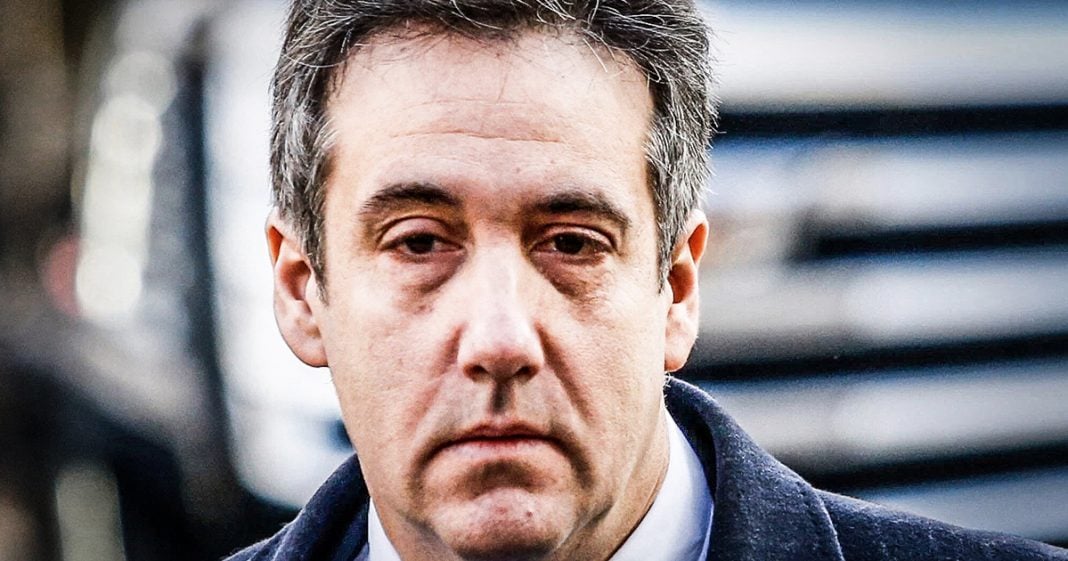 According to new reports and documents, former Trump lawyer/fixer Michael Cohen hired an IT firm to rig online polling in support of Donald Trump during the 2016 campaign. From what we know, this included polls from CNBC and Drudge Report, though others could have also been hit. This raises serious questions about how involved Michael Cohen was with Trump and what other illicit activities he could have carried out on Trump’s behalf. Ring of Fire’s Farron Cousins discusses this.

So big news out today about Michael Cohen, Donald Trump’s former lawyer slash fixer, and that is the Cohen allegedly paid and it from a run by somebody from Liberty University, the Falwell Organization, uh, to skew in rig, online polling, in order to favor Donald Trump. Here’s what happened. According to the reports here and the documents, everything has been disclosed, including the guy who worked at the it firm who came forward with all of this because he’s mad he didn’t get paid the 50,000 he was owed in 2014. Cohen reached out to him and said, hey, there’s this CNBC online poll that is trying to get people to tell the 100 best business leaders in the United States. And I want Donald Trump to be on this list. I want them to be number one. Well, the guy at the it from writes this algorithm that is supposed to just repeatedly vote for Donald Trump in this online poll to help rig it and put Donald Trump at the top.

Here’s what’s funny, is this guy who was supposed to get paid 50,000 for this and the other pole a wasn’t even able to get Donald Trump into the top 100. He didn’t even make it even after cheating. Then later on February 2015, there was a drudge report online poll asking Republicans who they want to see as they’re a candidate slash nominee for the 2016 election. Cohen did the same thing. Hey, you did such a bang up job getting Trump and the top 100 for CNBC, which he didn’t actually do. He failed to do a. So how about you rigged this online poll? So it shows that everybody wants Donald Trump to run for president. Guy Does the same thing. Uh, and Trump I think makes it to number five, couldn’t even crack number one, still even after cheating. But the reason all of this is coming to light is because the it guy who did all this did not get paid the full 50,000 that Cohen promised him instead.

And I have to read this Cohen reportedly handed him a blue Walmart bag containing between 12,000 and 13,000 in cash and randomly a boxing glove that Mr Cohen said had been warned by a Brazilian mixed martial arts fighter. So the dude gets a walmart bag filled with cash and a used boxing glove that may or may not have been used by some MMA fighter in another country, possibly if Cohen is to be believed, but that’s not even the weirdest part of the story. Here’s the weirdest part, and that is the Michael Cohen paid this guy, in addition to trying to rig the two online polls, which he failed to do, he paid them to set up a twitter account. Women for Cohen that was designed it’s purpose was to just tout the sexual prowess of Michael Cohen. I wish I didn’t have to say those words. I wish this were parody, but it is not as part of the deal like you rigged this pole, you rig this pole. Could you also just create a twitter account that says I’m a stud in bed. That would be bad ass, right? That is what Michael Cohen did. That is a thing that happened and it also raises some very serious legal questions because as we know, Michael Cohen got reimbursed by the Trump organization to the tune of $50,000 for it work.

And this all comes full circle. Yes, it is tied back to Donald Trump because they gave him the full $50,000. He didn’t pay out the full 50,000, which to be honest, the guy didn’t deliver what he was supposed to deliver. You probably could have renegotiated at that point, but instead Cohen pockets the money, Trump paid him the money that he pocketed. He strips the other guy. So in a lot of ways he’s become like a little Donald Trump jr jr at this point. But either way, this is bad for Trump. This is bad for Michael Cohen. Um, and it shows that there were no links that Michael Cohen was not willing to go to in order to help Donald Trump win the presidency. That’s the key takeaway. Michael Cohen was willing to do whatever it took, even if it was shady, possibly even if it were illegal. And that tells us a lot more about what Cohen may have known and may have told to the special prosecutor’s office.