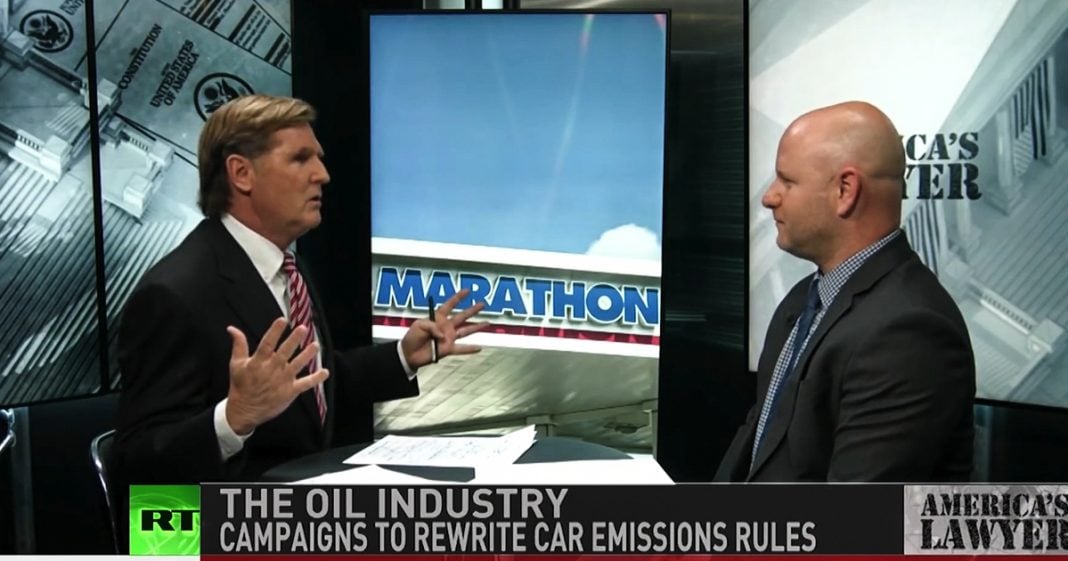 Via America’s Lawyer: Mike Papantonio and Trial Magazine Executive Editor Farron Cousins take a look at Marathon Petroleum, an example of the fossil fuel industry quietly working behind the scenes to make sure that we keep certain policies in place, and to reduce fuel economy standards for cars.

Mike Papantonio:             If you aren’t already convinced that corporations control the federal government, then look at the administration’s efforts to roll back fuel economy standards for cars. This entire initiative was created and drafted and executed by the fossil fuel industry and the administration gave them a rubber stamp of approval. Now, Farron, I’d like to say that this is new, but it’s not. It’s called corporate capture. That’s what’s happening here. We used to have industry that was actually they had to answer to somebody, but not anymore.

Now you have regulatory agencies that really don’t care if they answer. This story is particularly bothersome because it’s being sold. Facebook, we’re going to talk about Facebook a lot in the next few weeks, but Facebook is that they’re the go to people to sell the idea and the idea, this is the talking point, we should have a car freedom agenda. We should be able to choose if we want to drive, if we want to drive a gas guzzler, we ought to be able to do it. So now the fuel industry is secretly doing this. They real stealth operation. The Koch brothers running through Facebook. What’s your take on this story?

Farron Cousins:                  This is such a massive new report and again, it’s disappointing something like this doesn’t get the coverage that it deserves, but what happened is that we had journalists who uncovered this massive scam, it was being run primarily by Marathon Oil, with funding from the Koch brothers going through the American Legislative Exchange Council, ALEC.

So you have all the major players out there, all of them out there. And what they’re doing is they’re going state by state as one example, and helping draft legislation saying, hey, your state, don’t you want to be able to choose what happens in your state rather than let those guys in DC decide for you. So here’s what you do and this, I think it was an 18 word bill, they helped each state draft was.

Farron Cousins:                  Right, by the industry, and handed over to them that essentially said, we’re going to set our own fuel economy standards for our vehicles. So that was one path. The second one was that they wanted everybody in this country to submit a request to the EPA that says, allow us the freedom of choice, the freedom to pollute more.

Farron Cousins:                  Right, and this was a Facebook ad. They had two different ads. One of them had Obama in this evil looking picture that said, would you buy a used car from this man? And the other one had Donald Trump looking heroic, saying support the president’s freedom agenda.

In tobacco, what Ogilvy has came up with this idea. The way we’re going to let people keep killing themselves is to say, you have the choice. Remember that? You know the, remember the ads where they’d have the tell, the airplane, and they had these people standing out on the wing of the airplane to smoke their cigarettes. Right? And they were, the point was, you should be able to choose by golly, if you want to kill yourself with a cancer stick, you ought to be able to do it.

So here, the same thing’s happening. The, this Ogilvy is getting all of this money and then pouring it into Facebook and we’re going to talk about that in just a second. There’s a reason they’re pointed into Facebook, but they’re pouring it into Facebook under their secret campaign, stealth campaign, and they’re saying, you know what’s so wrong about this is Obama wanted to make you choose the kind of car that you’re driving. You shouldn’t have to drive a Tesla if you don’t want to. You shouldn’t have to drive a Prius if you want to, if you want to drive a gas guzzling hummer, that’s you’re right. The constitution says that. That’s the way they’re selling this.

Farron Cousins:                  Well, and what’s interesting is I don’t think people understand how bad the situation was before we, you know, increased fuel economy saying your vehicle has to get at least x amount of miles per gallon because down here in the south, the hummers were everywhere.

The big massive jacked up trucks were everywhere, and they’ve been disappearing over the years because they can’t sell them anymore and they can’t make them fuel efficient. So it made a big difference. I mean, those things where every time you turned a corner you would find one.

Mike Papantonio:             It was always a guy, Bruce Willis, goateed, tough guys, shaved head, leather jacket. He wanted to choose to drive a hummer. Hey, I know so, but that’s the way Ogilvy has sold this thing. And the interesting thing is the major place they used to sell it was Facebook. Facebook, you know, this is really the real ugly side of it. Facebook is always talking about, you know, we need to be responsible in this vehicle that we’ve created called Facebook. As a matter of fact, we’re so responsible that we’re going to, we’re going to prevent people from telling stories that we disagree with.

It might be a right wing story we don’t like right wing and he got some snowflake up and wherever they are making a decision, oh, this is, this offends me. We can’t, we can’t use that. So what ends up happening is they Facebook now. Yeah, they’re gonna. They’re gonna censor everybody that they don’t like, but they’re going to let these pigs at the trough, the oil industry, who by the way, if they get away with this, they get to sell an extra 400, 400,000 barrels of oil a day. That’s what this is about.

It’s important to note that when the EPA was accepting comments on whether or not to change the rule over 3,000 of the 12,000 that they received, it contained the same language that those Facebook ads contained. So they crafted the message for these people. In fact, they auto filled it. If you clicked on their little meme that they were sending around, all you had to do was add your name to the bottom and hit send.

And that campaign worked brilliantly because Facebook said, well, you’re paying us a lot of money. Marathon Oil, Koch, brothers, Americans for Prosperity, whoever you are, you’re giving us tons of money. We know this is illegitimate. We know you’re lying, but we’re going to do it.