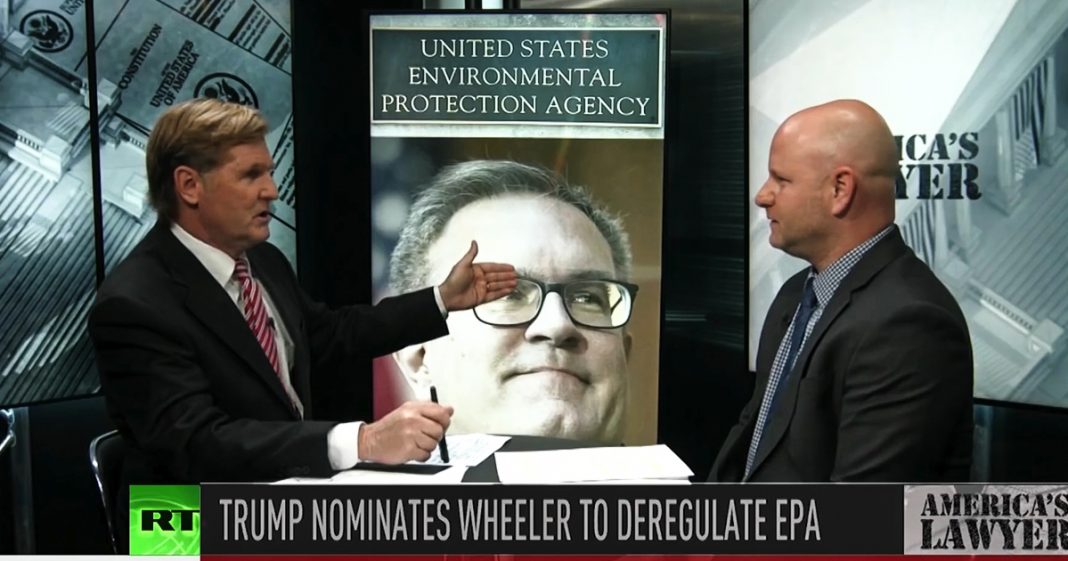 Via America’s Lawyer: Former coal lobbyist, Andrew Wheeler, is set to become the next leader of the EPA completing the industry capture of yet another government agency. Mike Papantonio and Farron Cousins discuss.

Mike Papantonio:             Former coal lobbyist, Andrew Wheeler, is set to become the next leader of the EPA completing the industry capture of yet another government agency. Now we’ve, we know a lot about this guy right?

Mike Papantonio:             This is the guy, this is the coal industry guy who who lobbied, lobbied all over the country, West Virginia. He was the guy who said, you know, mountaintop mining is a great idea. Let’s blow off the tops of mountains. Destroy entire ecosystems. He was the go to guy for, for the lobby and industry where it comes to all fossil fuels, so they love this guy. Fossil fuel industry is in love with this guy.

When he, here’s what he’s done already, this Wheeler. Now he’s supposed to, he’s supposed to replace Pruitt. Now, I don’t know how you’re getting worse than Pruitt when the stories are still emerging about what a thug Pruitt was, but so, so this guy then takes over and we start seeing rollbacks of methane pollution.

Farron Cousins:                  It is and here’s the interesting thing too about about Wheeler to me is the fact that the entire time Scott Pruitt was in office, everyone was saying Pruitt is awful. He’s got to go all these scandals. This is horrible and maybe we’ll get somebody better. Well, no, I don’t think anybody looking at this objectively ever thought we were going to get somebody better and Wheeler has come in and said, wow, Pruitt was so bad on the environment. I betcha I could do worse, but here’s, here’s the part.

Pruitt was not, and a lot of people blame Trump for this. I do not blame Trump for Pruitt or Wheeler. These are two guys who regardless of who the Republican was in that office, it could’ve been Cruz, it could’ve been Rand Paul. They would’ve done the same thing. This is typical and it honestly, if a Democrat had done this, probably wouldn’t have been that surprising either.

Farron Cousins:                  It’s because that’s what happens in DC. It’s not necessarily specific to a political party. It’s certainly not just this one politician up there. These are the guys that they go to when they need somebody to head an agency and destroy it. You know, you mentioned all these things Wheeler rolled back in his first 100 days alone. Sierra Club says he was pulling back one regulation every three days.

Mike Papantonio:             Right, now let me ask you something here. This is, every time I look at a story like this and I say, what is, what does the responsible media do? How about they did nothing here? How about they did nothing? Every three days this cat was rolling back and in that, those are the numbers, every three days he’s rolling back a regulation that supports the environment that we, by the rollback destroys the environment. Farron, thanks for joining me. We’ll pick up some of these stories next week.