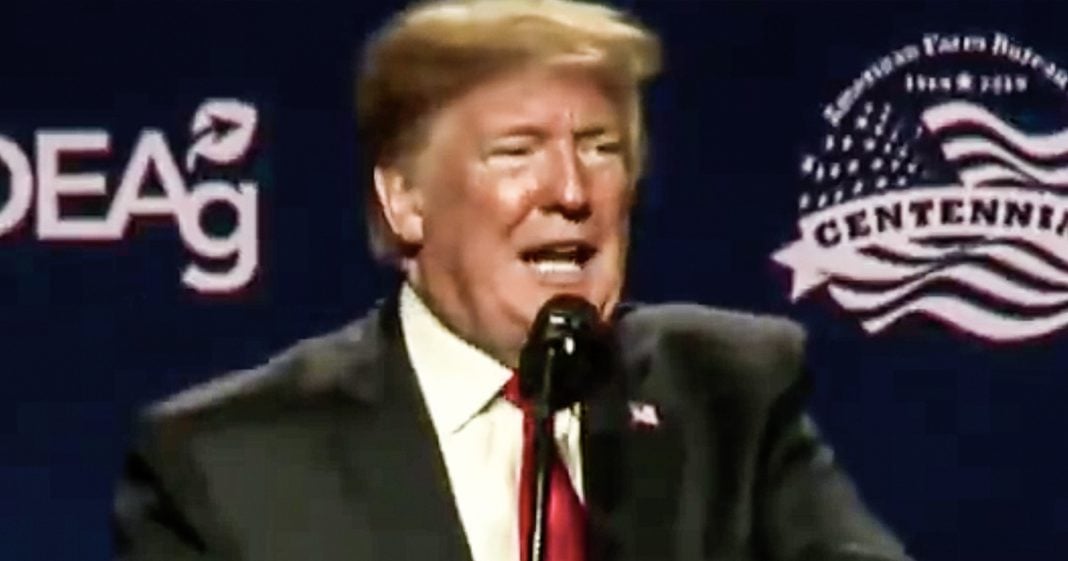 During a speech on Monday, Donald Trump openly made fun of immigrants who actually show up for their court dates, saying that they must not be very bright. Perhaps the President needs to understand that not everyone is like him, and some of us actually take rules and laws very seriously, like the immigrants who are just trying to seek a better life for their families. Ring of Fire’s Farron Cousins discusses this.

A very weird thing happened to Donald Trump’s speech on Monday at the American farm bureau convention. Uh, not only the fact that he had told us he was heading to Nashville for when it was really in New Orleans, uh, he, I guess I’m hoping they took them to the right place because he did end up giving a speech to some people where he proceeded to make fun mocked immigrants who actually show up for their court dates after coming into the United States. He mocked them, said they’re not very smart for showing up to court after they’ve been caught by immigration officials. And he said that only two percent show up. And he said those two percent are not going to make America great again because obviously they’re not very bright. Two Percent Huh? I Guess Donald Trump doesn’t look at his own administrations figures that show that actually about 90 percent of immigrants do show up to their court dates because unlike the president of the United States, these people actually seem to respect the law here in the United States.

They’re not like Donald Trump that says, no, I’m not going to show up. No, I’m not going to answer your questions, investigators, I am above the law and I don’t need any of this nonsense because I’m too smart for all of you. A lot smarter than those two percent of immigrants who sure as hell aren’t going to make America great again. That’s the essence of what he told those people down in New Orleans earlier this week. And it’s absolutely disgusting. It’s 100 percent not true, but it just shows you that this whole fight over immigration over the border wall. He told us yesterday there’s a new caravan coming from Honduras. No truth to that. Uh, but he told us that because it has nothing to do with our security. It’s about winning an ego battle for him at this point. This is what it is. He knows there is no threat coming across our southern border.

His own administrations numbers prove that. They don’t just show it. They prove that there is no crisis, but he would rather sit there in front of a group of well to do. Folks tell lies about immigrants and then insult them for actually doing what they’re supposed to be doing. When you come over here and seek asylum, you have to show up to court and argue your case. If you come over here, just as an immigrant trying to gain entry, you’re going to have to go to court. If you don’t have a kind of a, you know, a green card or whatever it is you, you have to do that. That’s the process and 90 percent of them are showing up roughly the same percentage of average Americans if they get summoned to court, but Trump’s Trump thinks they’re idiots. Trump thinks that stupid because in his mind these courts are more like mouse traps and as soon as that emigrant walks in, they’re slam that trap has closed and we got them. We got them. That’s not how it works. Donald Trump is the dumbest human being to ever occupy the oval office ever. And what’s even worse is that he’s bringing a whole group of Americans who probably weren’t very stupid to begin with, but he is dragging. Their Iq goes down to his level and there may not be any kind of return from that level of stupid.