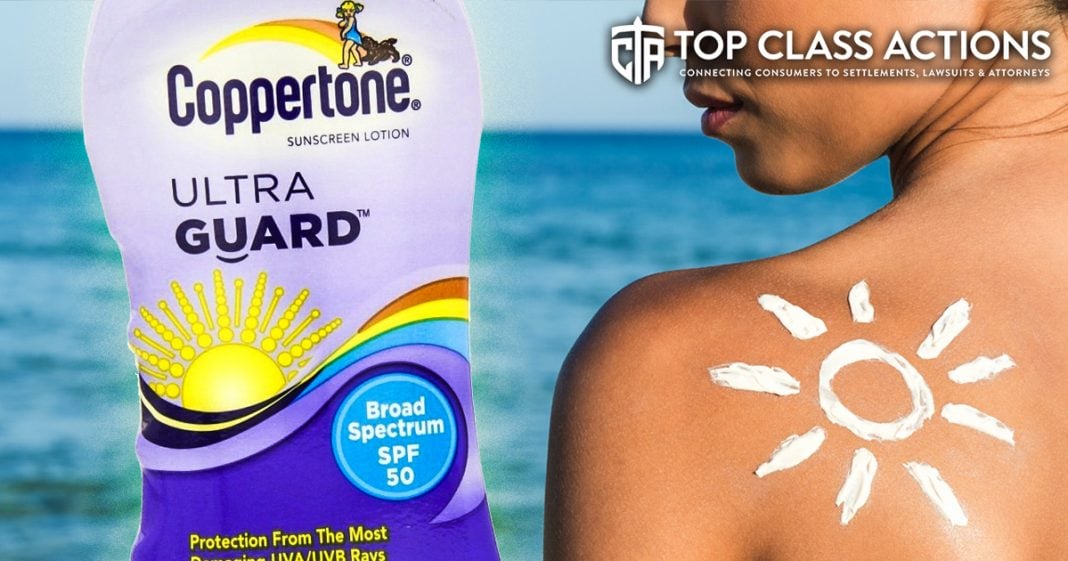 A customer in a Coppertone lawsuit alleges that the company’s SPF 50 sunscreen doesn’t work as advertised and caused her to develop chemical burns. The plaintiff Joanna G. says that she purchased Coppertone’s Ultra Guard Broad Spectrum SPF 50 sunscreen, and used it as directed. However, she claims to have developed serious chemical burns and permanent scars to her cleavage as a result of her use of the product. Additionally, the Coppertone lawsuit states that the sunscreen does not provide the level of sun protection advertised on the package. Ring of Fire’s Farron Cousins discusses this issue with Scott Hardy from Top Class Actions.

Farron Cousins:                  For many, many years now, we’ve been told that we need sunscreen to protect us if we’re going to be outdoors for any extended period of time, and that is absolutely true. Sunscreen can protect you from sunburns, which can damage the skin and lead to all sorts of things such as skin cancers. But what happens when the sunscreen itself is burning the customers? Well, that’s exactly what a new lawsuit alleges has happened to one woman after using Coppertone Sunscreen. And I’m joined now by Scott Hardy from topclassactions.com to tell us about this particular case. You know, Scott, I was reading up on this, you know, looking at the facts of it, what this plaintiff has alleged, and this is a, you know, pretty devastating what this woman went through. You know, multiple different doctors. She used this Coppertone Ultra Guard Broad Spectrum SPF 50 Sunscreen that allegedly gave her chemical burns after just having it on while being outdoors. Tell us the details of this particular case.

She goes into the doctor. Oh, you might have a sunburn and that’s the way it is. Continues to have pain like you said, what multiple times into the doctor until they said, no, this isn’t a sunburn, this is a chemical burn. And that is horrifying to think that instead of getting a sunburn that you are at risk of getting a chemical burn from using the sunscreen. That should be safe and applying it as you are instructed on the bottle itself.

Yet you don’t even get a sunburn. You do get a chemical burn and you suffer major pain, you know, you’re missing out on work. You’re going to the doctor, you’re going to the ER and the suffering that she went through is, is quite scary because you know, we don’t see a lot of lawsuits against Coppertone. Coppertone is one of the most well respected companies out there when it comes to sunblock.

So I was shocked when we got this report of this lawsuit and it’s not a class action. This is an individual lawsuit against Coppertone that alleged these issues and I’ll be very curious as more word gets out about Coppertone and this specific sunscreen if we get more reports of people that experienced the same thing that went into the hospital and were diagnosed with a chemical burn after applying the sunscreen and just how pervasive this issue actually is.

Farron Cousins:                  Well, and this particular plaintiff claims that she has been left with these permanent scars, you know, on her, on her chest or on her body from using this sunscreen. And again, according to her, you know, she did exactly what the directions told her to do. You know, put it on indoors, wait 15 minutes before you even go out in the sun. That’s what she did. And still ended up with these, you know, horrific chemical burns according to her doctor. So yeah, I mean this isn’t something we typically think about.

You know, I live in Florida, you’re in Arizona, you know, sunscreen here is a natural part of life. You know, you put it on the kids before they go outside. It’s something we use constantly and you know, a lot of areas of the country, same way. And this isn’t something I had ever thought that I’d have to worry about, you know, and now this does kind of create a little bit of that mistrust. Like should I put this on my kids? Is this stuff safe? What’s it gonna do to them?

And, and so this, this is a very jarring story here. And as you said, this is going to be interesting to see how it plays out and whether or not more people come forward saying, wait a minute, you know, I had this mysterious burn appear after using this. I think this is the same thing I had. So again, yeah, it will be very interesting to see if more people come forward with this.

Scott Hardy:                          Yeah, I mean because like you said, I’m here in Arizona and we’re constantly putting sunscreen on the girls. Even in the wintertime we’re still putting sunscreen on the kids. When they go in the pool in the summertime when they go outside, if there’ll be playing outside even just 15 minutes we have to put sunscreen on them and it’s really scary to think that we could put something like sunscreen on our child or our loved ones and just after limited exposure they could get a permanent scar on their body from a chemical burn and I’m really hopeful this was a bad lot of Coppertone and this wasn’t a larger issue and we’ll have to see it once it goes through trial if it truly was this sunscreen or what the actual issue was. But yeah, I mean sunscreen, you have to do it because nobody wants skin cancer and especially if you’re in a beautiful sunny place like you and I are, you’re going to have to use sunscreen. If even that’s not safe anymore, we’ve got major, major problems.

There are a lot of questions here. And also though there’s a second part to this and that is the allegations that this sunscreen is almost to the point of being ineffective because it deteriorates and breaks down too quickly. You know, it’s supposed to last one full hour in the sun. But a lawsuit is also alleging that that is not the case either. So explain that briefly for us.

Scott Hardy:                          Right. It appears that they’re doing some more tests and determining that instead of following the manufacturer’s instructions, putting it on, waiting for it to absorb, going in the water for an hour coming back out and drying off, reapplying the sunscreen, that it actually breaks down much, much, much faster. So you think that you’re protected, but unfortunately going in the water splashing around, it’s wearing off much sooner than expected, which leaves you open to a sunburn.

So even if you don’t get a chemical burn and you’re safe from that respect, but you apply it as instructed, you still could get a sunburn because of one actually lasted close to an hour. And that’s also scary because it’s hard enough to get your kids out of the water after an hour if you have to do it every half an hour and they’re not even told to do it, yet your kids could still get a sunburn. That’s just horrific.

Farron Cousins:                  Absolutely. And so this is going to be something, you know, it’s going to be very interesting to monitor this to see if other people do come forward. Maybe this was a one time event, maybe it interacted with other things, or the scariest option is maybe this was a whole batch of bad sunscreen. Some of it could still be out there on the shelves, so again, this is something everybody please pay close attention to this story as it continues to develop because it could easily affect you, your family, your friends, anyone.

So Scott Hardy, topclassactions.com. Thank you for telling us this story and thank you for the investigation and staying on top of these kinds of things so that consumers can always understand what’s happening in this country. Thank you very much.