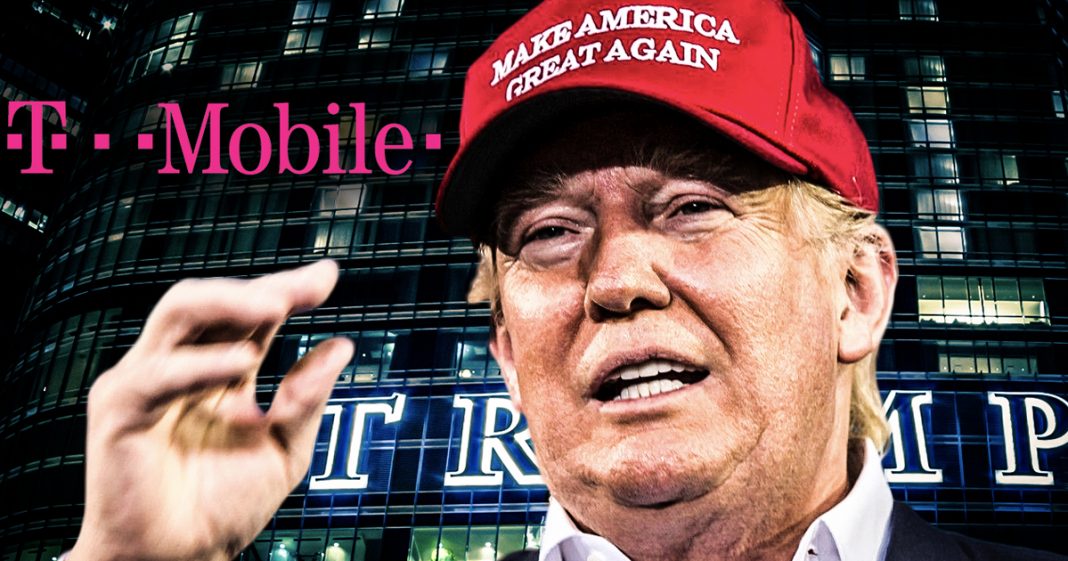 Business leaders and foreign officials have long known the secret to getting what they want out of Donald Trump – flattery and cash. And businesses in the US are using those two keys to unlock a world of mergers, special favors, and incentives. The Washington Post recently detailed how businesses are playing the President by forking over tons of cash to his hotels, and foreign leaders have been doing the exact same thing. Ring of Fire’s Farron Cousins explains what’s happening.

Last april, T-Mobile announced a $26,000,000,000 proposed merger with their telecom rival sprint. Now they still have not yet completed that deal because it has to be approved by the president of the United States and according to a new report by the Washington Post, the executives at T-Mobile are not stupid and they know that the best way to get the president to approve your project is to give him lots of money indirectly by staying at his hotels. In fact, the post points out that the day after this merger was announced, the day after nine different executives from T-Mobile decided to book rooms in Donald Trump’s Washington DC hotel. In fact, that wasn’t the only time they did it either because since that announcement, some executives have stayed for multiple days in Trump’s DC hotel more than 10 different times. See, these people understand that if you want to get a favor from Donald Trump, the best thing you can do is to help support his businesses.

Show that you are a loyal paying customer to the Trump organization and if you do that, Donald Trump is going to reward you. He still has yet to sign off on the team mobile merger, which is why they continuously stay in his hotels. They’ve been attending meetings at the Justice Department. They’ve been meeting with people from the administration in the actual hotel itself just to make sure that everybody involved with the deal knows that the executives at T-Mobile are 100 percent on team Trump. But here’s the thing, T-Mobile is not the first company to do this. Since Donald Trump took office, we have seen multiple different businesses think tanks, a lobbyists and foreign government officials, booking hotels and meeting spaces and hosting events in that Donald Trump DC hotel, and it’s not by coincidence. They understand exactly what they’re doing. If they go to the president’s hotel, he is going to favor them.

They have cracked the Donald Trump code, which to be perfectly honest, was not very difficult to crack in the first place and they’re using it to their advantage and it’s not just businesses and think tanks. It’s foreign dignitaries so far since Trump has become president. According to the VIP logs for Trump hotel obtained by Washington Post, they have hosted officials from Kuwait, the Philippines, Saudi Arabia. You know, all the countries out there who need something from the United States or need the United States in the case of Saudi Arabia to just shut their mouths and turn the other way. And the best way to do that is to become a patron of donald Trump’s businesses. And if you think back to and start, you know, looking at all of the things we’re. Donald Trump may be compromised. All of it centers around wanting to build a Trump tower in that country. Other countries have been using this as leverage against this man for years, even before he became president of the United States and they have not stopped since he became president of the United States.

And that is one of the reasons why the emoluments clause lawsuit against Donald Trump that is still ongoing and proceeding is so important. As long as Donald Trump is corruptible, as long as he is able to profit off of the office of the presidency, he is going to continue to do so. But if these emoluments clauses, suits, are successful, it could force the president to completely disavow and sell off any interest he has in the Trump organization itself. And that might be something that he’s not willing to do and possibly could say, you know what? To hell with this President Gig? I don’t want to give up making billions of dollars because at the end of it, that’s the only thing Trump actually cares about in life.