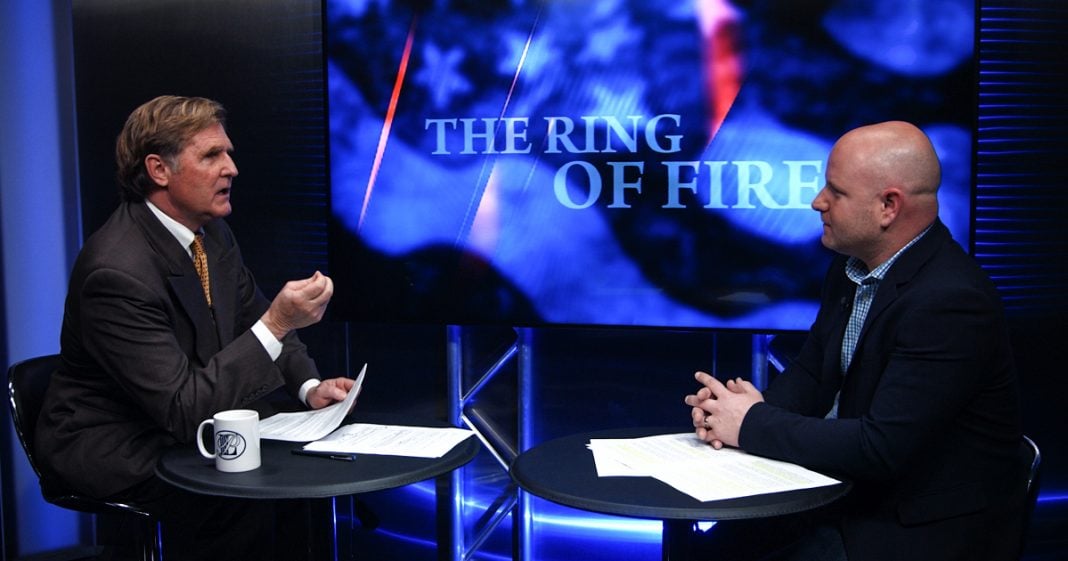 If you aren’t already convinced that corporations control the federal government, then look at the administration’s efforts to roll back fuel economy standards for cars. This entire initiative was created, drafted, and executed by the fossil fuel industry and the administration gave them a rubber stamp of approval. Ring of Fire’s Mike Papantonio and Farron Cousins discuss this issue.

Mike Papantonio:             If you weren’t already convinced that corporations control the federal government, look at the administration’s efforts to roll back fuel economy standards for cars. This entire initiative was created, it was drafted, and it was executed by fossil fuel industry types and the administration, Trump, gave them a rubber stamp for that kind of approval. This is, this is a disgusting story. Okay. Now you’ve heard me beat on, I try, as you know, I try to call balls and strikes.

I beat on Republicans, I beat on Democrats. I beat on Obama quite a bit, but to his credit, he did have a plan to do something about oil consumption in the United States. His goal was to have it have oil consumption cut in half by saying that we want cars that by 2025 can accomplish that. Right? Had it underway. It was, you know, obviously working. The oil industry then gets together secretly, very secretive, run by the Koch brothers by the way.

We think, you know, if you look at the media now, it kind of looks like the Koch brothers have become liberals because they want, they want people to be able to come across the border and you go, what? And you know what that’s about. They’re just looking for cheap labor. So here we have the Koch brothers that have secretly have this, this underway, and what they’re secretly trying to do is they’re trying to say we can’t, that we can double the amount of oil, of fuel that an SUV uses.

And if we do that, we can do it by, by taking away these laws that Obama tried to push through. And if we do that, we’re going to make an extra 350 to 400,000 barrels of oil be sold in the United States. They’ve done, they’ve done the computation. They say, if we roll this back, we’re going to sell an extra 400, 400 million barrels of oil. Heck, with the fact, oh they say we can do this because why?

Farron Cousins:                  Per day, not per year, per day, and when this new rule was announced and this administration came out and said, listen, we’re going to roll back fuel economy standards. My first thought was I should slam my head into the desk, but second was obviously this is going to benefit fossil fuel companies, but other than that, why in the hell would they even? What’s the motivation there?

Because he’s not going to make money off it. You know Scott Pruitt who did it, he wasn’t going to make money off of it, but it turns out they weren’t even the ones who wrote it and that’s what, you know, New York Times to their credit, did a phenomenal expose on this and it really was. It was drafted by the Koch brothers groups and by ALEC working together.

Mike Papantonio:             But let’s be clear about that. The industry drafted the legislation and handed it to the to the people who had to make some change.

Mike Papantonio:             They’re the ones, the industry actually drafted every word of it, hand it to the bureau, to the bureaucrats, hand it to the, you know, to the folks that should be doing what they’re supposed to do and looking over everybody’s shoulder. They hand it to them and those are the, and then it becomes the talking points. I mean, that’s exactly what happened here. Drafted by the industry. We see it in Congress all the time.

We want to see legislation change the industry drafts it themselves, word for word. Gives it to some creep Congress person, that Congress person then puts it on the floor and makes it into the discussion, but it’s all drafted by the industry. Interesting thing about this. Their rationale for why they should do this is because we no longer have a fuel crisis. That’s the rationale. We have a ton of oil out there. We don’t have to worry about anything. So now’s the time to change that law since we have so much out there. Heck, with the future.

Farron Cousins:                  Right. Yeah, we don’t need to worry about the air pollution or the reduced asthma attacks and heart attacks from increasing fuel efficiency, so instead, while the president is out there on twitter every day talking about how low gas prices are, which yeah they’re coming down, which is great, but it’s not going to be great when you suddenly have to buy twice as much gas because your car’s fuel efficiency just went from if it’s an SUV from 15 miles per gallon back down to the 8 miles a gallon that we saw with suv was built during the Bush administration.

Mike Papantonio:             Alright, let’s beat the hell out of Facebook right now. Okay. Let’s, let’s you and I beat the ever living hell out of Facebook. I got to tell you somehting. I, I’ve got facebook accounts, I’m closing them. I mean I’m literally closing them down. Okay, so facebook understands exactly what’s going on. They’re participating in this campaign and they’re actually allowing advertising that they know is completely false. Facebook understands that this is completely a sham, but the major campaigns that these, the oil industry is running is through Facebook and they’re telling people, here’s their talking point.

Gee whiz, Joe, you ought to have the right to choose whatever car you want to drive, and there’s some bureaucrat in Washington and Obama and matter of fact that they actually have Obama’s picture where they say, would you buy a car from this man? In other words, they’re attacking Obama for doing what he was supposed to do. They’re attacking the bureaucrats for doing what they’re supposed to do. In saying on this Facebook, get rid of Facebook.

Mike Papantonio:             You remember when I handled the tabacco, well you were a kid. You’d started with me kinda I think when we started the tobacco litigation, but part of this talking point back then was, damn it, don’t let them take your freedom away. If you want to smoke and kill yourself, you should be able to do that. This is America. This is the same kind of ad. You know? Nobody should be able to tell you what kind of car you want to drive.

Don’t let them do that. Vote to do away with these, with these limitations. Facebook participating like you know, oh yeah, this sounds like, this sounds right, but we’re going to, we’re going to take this person off of Facebook because what they said was offensive to some nerd head working up in Portland, Oregon or wherever they are, and that nerd had says, oh, we can’t allow this to happen. Isn’t that how it works?

Farron Cousins:                  Yeah, and at the same time also leaking the data of tens of millions of their users and illegally spying on them and letting other companies spy on them. Facebook is Satan incarnate.

Mike Papantonio:             It is and I don’t know why people aren’t buying, I don’t know why. You know what you go there, it is, oh, here’s Susie’s birthday. Here’s the new truck Susie got for, I mean, come on man. It’s a vehicle that is a powerful vehicle. Could be if the, I’ve lost confidence in, I don’t know about you. This story, when I saw this story, there were no surprises, but I was outraged. I was outraged because of the juxtaposition of what Facebook is determining they’re gonna print, or they’re not going to print versus you pay us enough money by God will print anything.