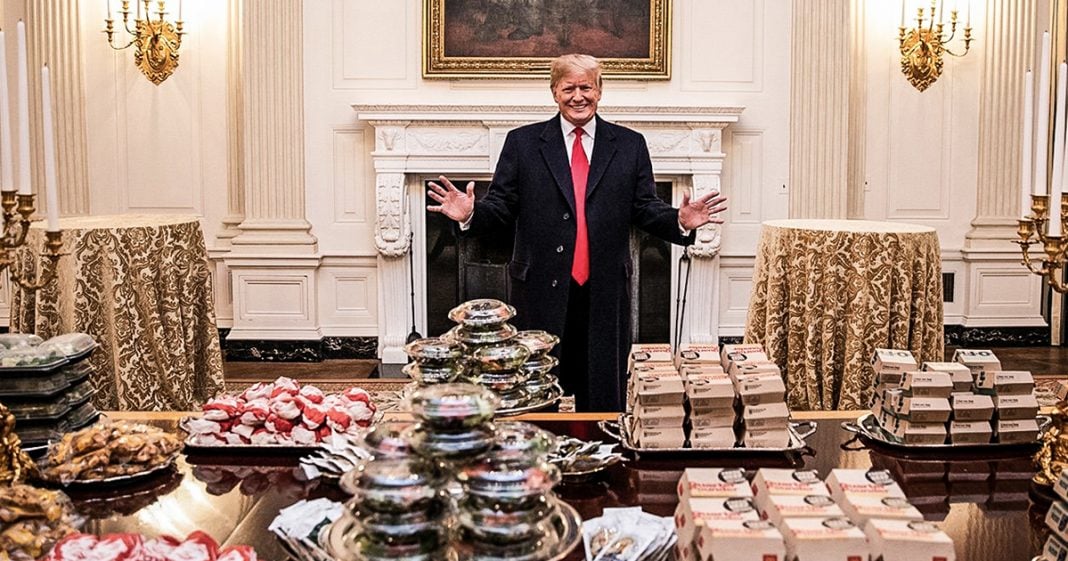 The Internet lit up on Monday evening as photos of Donald Trump’s buffet for the Clemson Tigers’ celebratory dinner made the rounds on social media. Trump greeted the National Champions with food from McDonald’s, Wendy’s, and Burger King, with some pizza for good measure. The dipping sauce packets were placed in beautiful silver bowls, and golden candles lined the table of this hillbilly buffet. Ring of Fire’s Farron Cousins discusses this.

So imagine you’re a college athlete playing football, you go through the entire regular season, undefeated, you make it to the post season, the playoffs undefeated, and then you win the national championship for college football. That is exactly what happened to the Clemson Tigers this year. Undefeated record. So Monday evening they got to make a trip to the White House as is customary for the national champions. And when they arrived, they were greeted with what could only be described as a hillbilly buffet of fast food provided by President Donald Trump. Now, before the clemson players even arrived at the White House, the pictures began circulating because Donald Trump was standing over this table filled with fast food garbage, bragging about how awesome he is, how awesome the spread is. And of course that he paid for it all himself. The pictures were making the rounds. They’re all equally hilarious to see Donald Trump sitting in front of a table with what most, most people assumed was probably just his typical Monday night dinner.

Um, the other thing that people were pointing out was the fact that all this food had been picked up a while ago, laid out expertly to sit there and get cold before the players arrived. Uh, it was a smorgasbord, you know, they had McDonald’s, they had Wendy’s, they had burger king, they had pizza, they had everything that the typical college kid would gorge themselves on. And I have no doubt that, you know, obviously these kids, even though they’re all, most professional athletes, they probably do indulge every now and then and eat fast food or pizza. So I have no problem with that. I don’t think they were poisoning their bodies there. What I do have a problem with is president Trump standing there like he’s giving them the greatest meal they’ve ever had in their lives. I mean, these guys were dressed up there in their suits.

It’s a big honor to be invited to the White House. They just want a huge national title and you’re giving them fast food. I mean, they could have stopped on the way to the White House and brought their own if they wanted to. You’d go to the White House because it’s got to be this crazy good experience that you will remember for the rest of your life. And now I guess to Trump’s credit, he tried to make it super fancy forum. They had the chicken nugget dipping sauces in those wonderful silver bowls. So I guess that was kind of fancy. He had those golden candles lining the table, you know, how to create the ambience in the room. So that was pretty nice for everybody. Um, but here’s the thing, uh, you know, again, the Internet absolutely had a field day with this. Uh, there were pictures going around people posting the picture of Trump standing there doing this thing saying, you know, caption this, somebody, he took Trump and Photoshop him as the Hamburglar standing in front of the table.

That happens to be one of my personal favorites. But again, this isn’t about that. He gave them fast food. Okay. This is about the fact that the man did pay for it himself allegedly or so he claims but an alleged billionaire couldn’t do better than fast food for these kids. I mean, you couldn’t have somebody at the White House, and I know a lot of the staff is furloughed, which couldn’t have a couple people hopping to the kitchen and actually make fresh hamburgers for these kids, you know, maybe make some, some fresh pizzas, something better than just fast food mean how embarrassing was it for the secret service agents that had to go through the drive throughs and all these places and pick all this crap up for you. But again, he’s sitting there bragging to the public. I paid for this, I paid for all of this, and then he tweets out afterwards.

This is his tweet word for word misspellings and typos and all great being with a national champion. Clemson tigers last night at the White House because of the shutdown, I served them massive amounts of fast food. I paid over 1000 hamburgers, et cetera. Within one hour it was all gone. Great guys and big eaters. I don’t even know what to make of that. I honestly, at this point, I’m just kind of at a loss for words, but again, his narcissism shines through and that’s what this is about. You know, it’s not about the fact again that he gave them fast food. I mean Fox News spent hours back in the day talking about the fact that Obama ate a Rugala and liked fancy mustards, you know, they, they’ve already shown how stupid it is. Just talk about somebody’s food preferences. What this is about. That was the narcissism because he sat there in front of the press wanting credit for being a decent human being for five seconds for providing these kids with food that he paid for and as one savvy twitter user actually pointed out a, the stuff he got them from McDonald’s is all actually a part of their new two for $5 menu.

So this alleged billionaire, yeah, he may have paid for it, but he literally went as cheap as possible so we didn’t have to pay more to feed these kids who just accomplished this great feat of becoming the national championship in college football. This was all about trying to get some positive press all about trying to show, look how great I am had nothing to do with those kids. You know those athletes, the men in that room had nothing to do with them. This was Donald Trump trying to get another little ego boost and hoping the press for a few minutes. We’ll talk about how awesome he is because he bought some college kids some fast food.