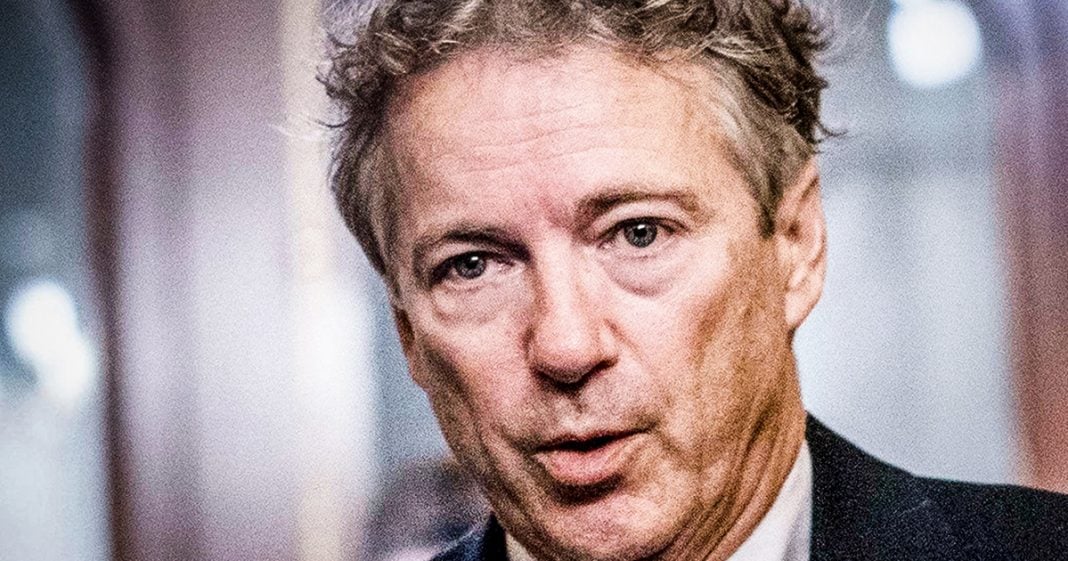 Republican Senator Rand Paul – a man who once claimed that universal healthcare was akin to slavery – is heading to a country with universal healthcare to have his hernia surgically repaired. The hernia was made worse after Paul was attacked by his neighbor in late 2017, but the fact that he feels he can get better care in a country with socialized medicine speaks volumes to his hypocrisy. Ring of Fire’s Farron Cousins discusses this.

He’s not getting it done for free. He’s going to pay roughly 4,000 on the low end, maybe 8,000 on the high end for his hernia repair surgery. Now, here’s the thing, this is nothing new. Wealthy people in the United States travel all around the United States to go find a better doctor. They go out of country to find a better doctor. So that’s not even what this is about. I mean, if the specialist for what you need done happens to be in another country and you have the money to go there, hell yeah, you’re going to go there. What this is about is the death of a talking point and that is what Republicans have been telling us for years, that universal healthcare destroys healthcare in a particular country. That people in Canada have horrible wait times. They have horrible doctors. The doctors there are miserable and can’t make a living and oh, by the way, they also have some of the best doctors in the world and we’re going to go see them the second we have a problem, which is what Rand Paul is doing.

This is about his hypocrisy. You know, he has the money to go up there and only pay four to $8,000 according to this hospital’s website, for this hernia repair surgery. The average person in the United States, hell even rand Paul in the United States, having that surgery done here, that would cost literally tens of thousands of dollars. This would not be a four to $8,000 outpatient procedure. This is something that would destroy someone financially if they were not prepared for it, especially if they didn’t have health insurance. So not only is rand Paul going somewhere where medical procedures are cheaper, a tiny fraction of the price they are in the United States, but he’s going to a country where doctors are at least partially funded by the government. That is hypocrisy at its finest and that is what Rand Paul has been all about since day one of his career. Slight warning though to Rand Paul. I hope you’ve been tuning into Ring of Fire here because we have been warning people for a couple years at this point about the faulty Hernia Mesh that’s being used in hernia repair surgeries.

That’s causing massive problems in patients. It’s, it’s migrating. It’s actually bonding with the human tissue creating these massive infections. It’s nearly impossible to remove from the body once that happens. So I know we’ve let it go rampant here in the United States because our regulatory agencies are so dysfunctional, but you may just want to check with your doctors at your fancy private hospital up in Canada to make sure they aren’t using one of those faulty Hernia Mesh kits because you wouldn’t want to come back into this country and then suddenly realize that, oh no, because we hate regulatory agencies. My body’s now worse off than it was before I had the surgery.