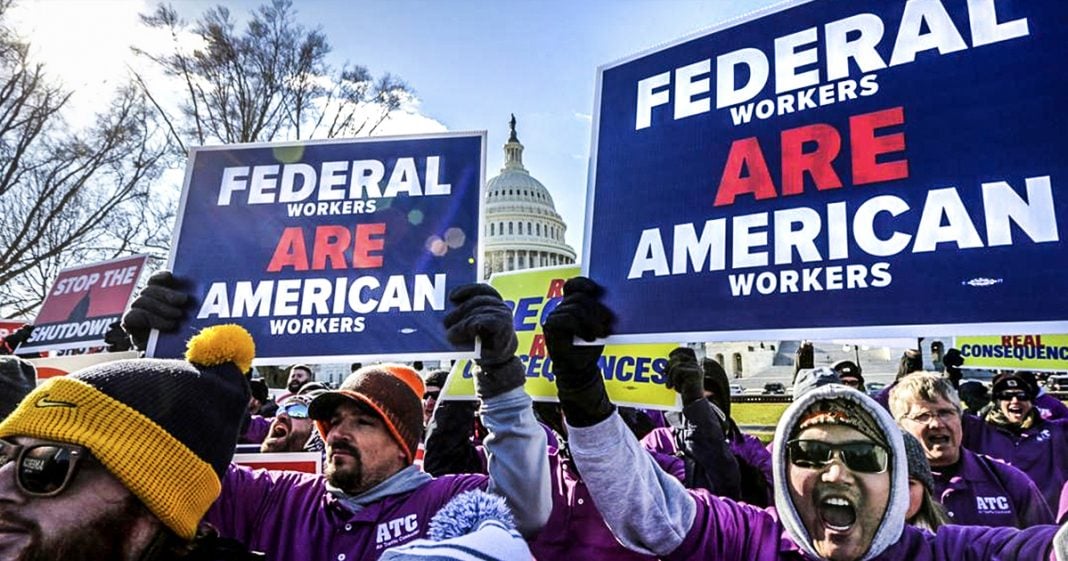 A group of federal employees are suing the Trump administration over the shutdown, arguing that the fact they still have to work but can’t be paid is a violation of the 13th Amendment that effectively abolished slavery in the United States. Previous lawsuits from federal workers during government shutdowns have been successful, and this lawsuit will likely see similar results. Ring of Fire’s Farron Cousins discusses the suit and the possible outcomes.

Lawsuits are piling up right now against the Trump administration and the bosses who are currently forcing their employees to work without pay. Now, these are the furlough government workers who have been affected by this partial government shutdown, who are being coerced and forced to work their current jobs without pay. Now again, this does not cover all of the 800,000 furloughed workers. Some of them were immediately just sent home, deemed quote, non essential, but those essential folks, the people who the government can’t function without. Those are the ones who are told. If you don’t show up, you are fired and when you do show up, do not expect to get paid for the time that you’re working. And according to the latest lawsuit, this is a clear violation of the 13th amendment which abolished slavery here in the United States. A group of federal workers is now suing the Trump administration and the people that they work for within the federal government for forcing them to work without pay, which they say in the lawsuit.

The argument is that this amounts to involuntary servitude to their employer because again, their employers have issued warnings. If you don’t come in, if you call out sick, don’t ever come back because you’re fired. So they are forcing these people to go into work. They know that these people will not be paid for the work that they are performing. And that is what spawned this particular lawsuit so far. This one is the only lawsuit to invoke the 13th amendment argument. And to be honest, that’s going to be a very difficult one to prove. As the Supreme Court back in 1988 actually ruled that forcing a mentally ill people in the United States to work without pay, uh, did not violate the 13th amendment even though the people were threatened with if you work, either you work without pay or we put you in a mental institution because you’re mentally ill, that somehow didn’t violate the 13th amendment.

So these workers have a very tall uphill battle ahead of them, um, that they likely may not win at this case. However, there are plenty of other law suits right now that are pretty much 100 percent going to be successful brought by furloughed federal workers who are working without pay. Obviously this does violate wage and hour laws here in the United States. It’s happened during every other government shutdown and pretty much every other time the furloughed workers who worked without pay have been successful, in fact so successful that the government actually has a fund set up that is designed to pay out these lawsuits brought by furloughed federal workers because they know they’re going to lose and they want to have this pot of money ready to go when the lawsuits inevitably come. But this one, however, about the 13th amendment is special. Again, the only one to invoke invoke the 13th amendment, but also because if it’s successful, this would effectively ban any furloughed worker essential or not essential from being able to work during a government shutdown, which means again, if this lawsuit were to be successful, the next time the government shuts down.

There’s no TSA. None without TSA. Would there still be air travel here in the United States? There’d be nobody to monitor security. Would plane still be able to fly? Would people still be able to get a flight and go somewhere? Unlikely given what happened before the TSA existed, so that means that if we have another government shutdown, airports across the country might shut down. Air travel may suddenly stop in this country. Food inspections, safety inspections, health inspections, worth workplace inspections, all of that would end. The federal court system would also shut down. No more lawsuits, no more criminal cases. Prison workers will be forced to go home because are essential yet furloughed in many areas. Not all of them, but many. The entire country would grind to a halt if this lawsuit is successful the next time there’s a government shutdown, and that’s why this one is so important and I hope it succeeds. I hope it does because that may be the only way to show these republicans who are the ones who continuously shut down the federal government. That what you’re doing has very real consequences here in the United States. So I hope, I hope the lawyers handling this lawsuit understand what’s at stake in the long run because this may be one of those lawsuits that forever changes the face of the United States.