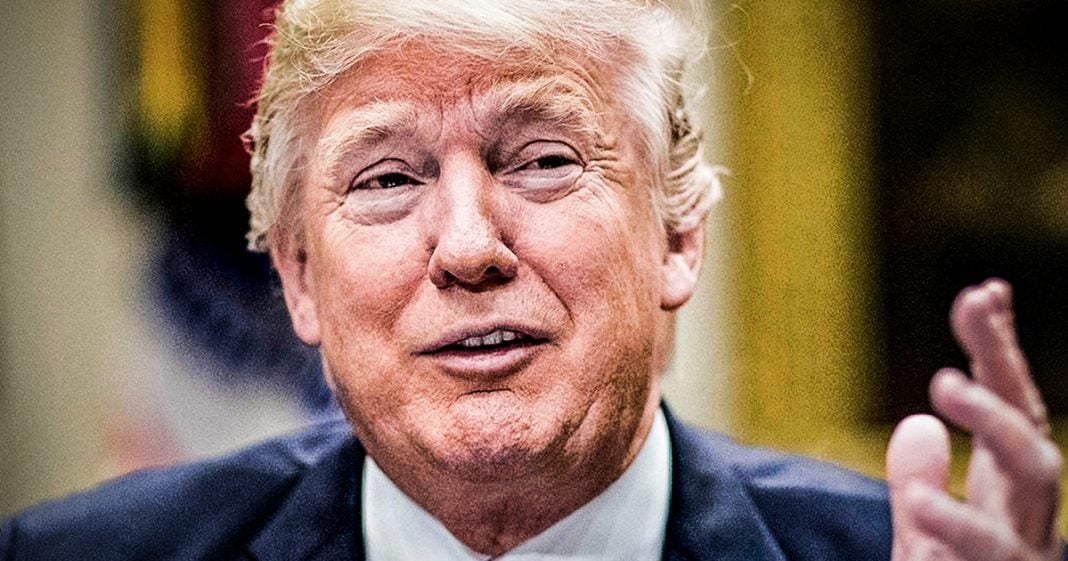 Conservative commentators Abby Huntsman and Meghan McCain said this week that Donald Trump couldn’t possibly have been colluding with the Russians because he’s too stupid to know how to do that. This is a talking point that had previous been used by Republicans, but it died out early on into the Trump administration. Does this mean that Republicans are finally out of excuses and now have to start back at the beginning? Ring of Fire’s Farron Cousins discusses this.

What’s really interesting to me is the evolution of talking points coming from both conservatives and from inside the White House itself. You know, in the early days of the Trump administration, back when the entire Russia story at first started, a lot of conservatives were already out there saying they’re first talking point was that the president is not smart enough to collude. He doesn’t even know what that word means. He couldn’t have done any of those things that he’s being accused of doing. That was one of the first talking points thrown out by conservatives. Then later obviously involved that. No, he didn’t do this. No, he didn’t know that. The rest of the people who worked with him, we’re doing this. No, no, no, no, no, no. Collusion’s not even a crime, and now it’s. Yeah, I mean, but hey, wouldn’t you collude if you could collude. That was pretty much the latest one.

Well, now we’ve come full circle. We’re back to the. Donald Trump has not smart enough to be a foreign asset of another country. That is exactly what conservative commentators, Abby Huntsman, and Meghan McCain said on the view earlier this week, donald Trump’s just too damn stupid to knowingly be an agent of a foreign country. Uh, they were talking about this. To give you a little bit of context, this was obviously in regards to the story that came out at the end of last week showing that the FBI, after Trump fired comey, was so concerned that Trump may be an asset of Russia, that they launched an investigation that predates the muller investigation. Now, once the Muller investigation began, this other investigation by the FBI that had been started, got moved into that, it did not end. It did not disappear. It just became a part of what Mueller is looking into. He took over that essentially.

So big deal, right? Also week or so before that, we get the unredacted court filings from Paul Manafort’s lawyers that specifically talk about all of his contacts and information sharing with Russia. So look, this may be something that people don’t want to talk about. You know, people think, oh, you’re beating the drums for Cold War. I’m not, I don’t want a Cold War, I don’t want a hot war. I don’t want any wars with Russia, but at this point there, there’s literally no denying at all that at least some members of the Trump campaign were in contact with people who have ties to the Kremlin. That is a fact. We have seen the evidence. We have seen the filings. They frigging admitted it. We know. Got It. We know we can confirm that. What we can’t confirm is what Donald Trump did or did not know. Was he a part of it?

Is He even smart enough as conservatives are asking us right now, my opinion now, the man’s not smart enough. He really isn’t. He is not smart enough to knowingly be an asset of any foreign country, but he is 100 percent dumb enough to get played by any foreign country that wants to play him. And that doesn’t just pertain to Russia. I mean, let’s not forget that there is also just as much evidence to suggest that this administration, at least some of the members, especially cushner, uh, were in cahoots with Saudi Arabia, United Arab Emirates. Qatar, I mean that’s a pretty long list of potential collusion partners there, you know, and those three avenues, the Saudis, UAE, Qatar, those already even really being followed right now because everybody is obsessed with Russia. I think we need to go down every single avenue available to us. That’s one of the reasons why it’s so important that we get jared Kushner to go in and talk to Miller because he will squeeze him like an orange and that guy will just drip all of the secrets he’s ever held throughout his entire life. But nonetheless, no, Donald Trump is not smart enough to ever knowingly work for or collude with any foreign powers, but he definitely is dumb enough to do it accidentally.