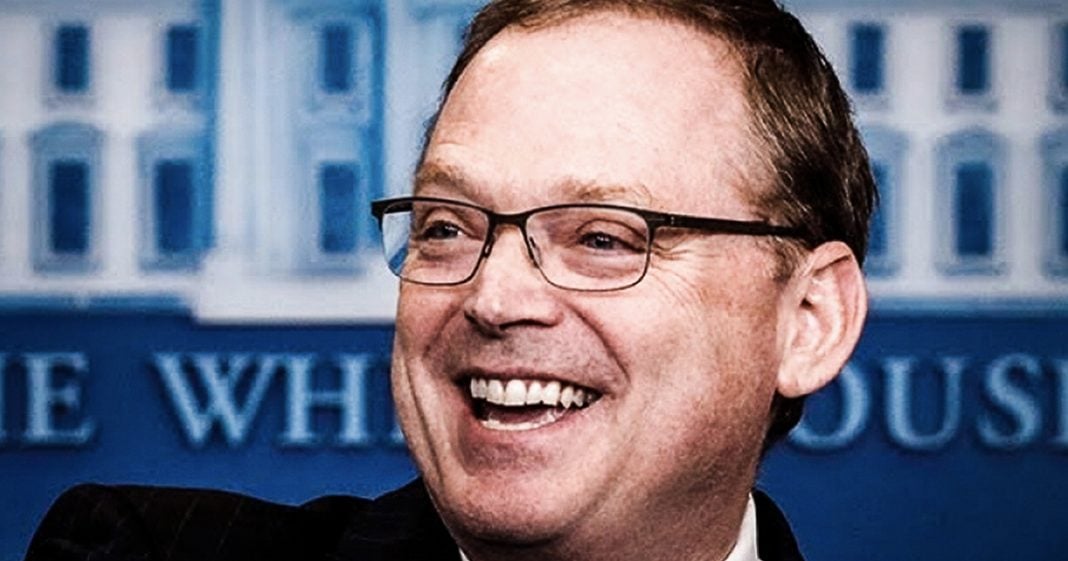 Kevin Hassett, the White House’s Chief Economic Adviser says that the furloughed government workers are lucky right now because they get to be on vacation without actually having to take vacation days. Thousands of these workers are applying for unemployment benefits, safety inspections are being halted putting Americans at risk, and this guy thinks the workers who aren’t getting paid are just having a margarita and sitting on a beach? Ring of Fire’s Farron Cousins explains what’s really going on.

White House chief economic advisor, Kevin Hassett, appeared on PBS news hour late last week to tell us how lucky the furlough government workers really are. These are the 800,000 government workers who are currently not getting paid because of the government shutdown and according to Hassett here, the chief economic advisor for the White House. These people are quote better off as a phrase he used better off and here’s why. According to acid, these people are better off right now because they’re all just on a big vacation and they don’t even have to use any of their vacation days. So of course ignore the reports of the thousands of furloughed workers having to apply for unemployment right now. Ignore the reports of the hundreds upon hundreds of furloughed workers that showed up at food banks this weekend because they can’t buy food for themselves or their family. They’re really all just on one big vacation. Sipping Margaritas is on a beach somewhere because they’re just the luckiest people in this country.

They don’t have to go to work. Well, some of them have to go to work and yeah, they’re not being paid, so I guess they’re not better off. Uh, but yeah, those people who can’t pay their bills, who can’t buy food, who are in danger of losing their homes or their apartments to everything. Yeah. Those people are so much better off. According to White House chief economic advisor, Kevin Hassett, they don’t understand what’s happening. The White House doesn’t understand what is happening to human beings in this country. Either they don’t understand or they flat out don’t care because these people are suffering. As I mentioned, reports came out this morning saying that hundreds of furloughed workers had to go to food banks this weekend because they can’t buy food anymore. Thousands getting unemployment as of middle of last week. Today, our court system, our federal court system is operating without money. Things are getting bad. Things are going to continue to get worse. We had federal workers last week who got pay stubs that red $0 and zero cents on them.

These people need money. These people want to work. These people have jobs and they’re not allowed to go in and even worse are the ones who do have to go in and won’t get paid. Now has. It did go on a little bit after he said, these people are better off because he said when they come back, they’re going to get all their money back. That’s not true. That’s not how it works. You know? A lot of people think that, okay, well yeah, they’re just not getting paid. Now when they go back to work, government reopens, they get all their back pay. They don’t. Some of them do. Not very many, but some of them do, but all those quote nonessential workers who we’re finding out now are very essential. They don’t get back pay. They just didn’t get paid for these weeks. Their income just took a dramatic hit for the year 2019.

Congress has passed legislation that Donald Trump claims he will sign that will guarantee back pay for most of the people affected by the government. Shut down, but it’s not going to cover all of them. There is nobody who is going to walk away from this government shut down, at least none of the 800,000 furloughed workers better off than when it started. This has impacted the lives of nearly 1 million American workers. Not to mention all of the trickle out people who have been affected by this government shutdown, so to say that they’re better off is either the dumbest thought that Kevin Hassett has ever had or one of the most heartless things this administration has done this year.