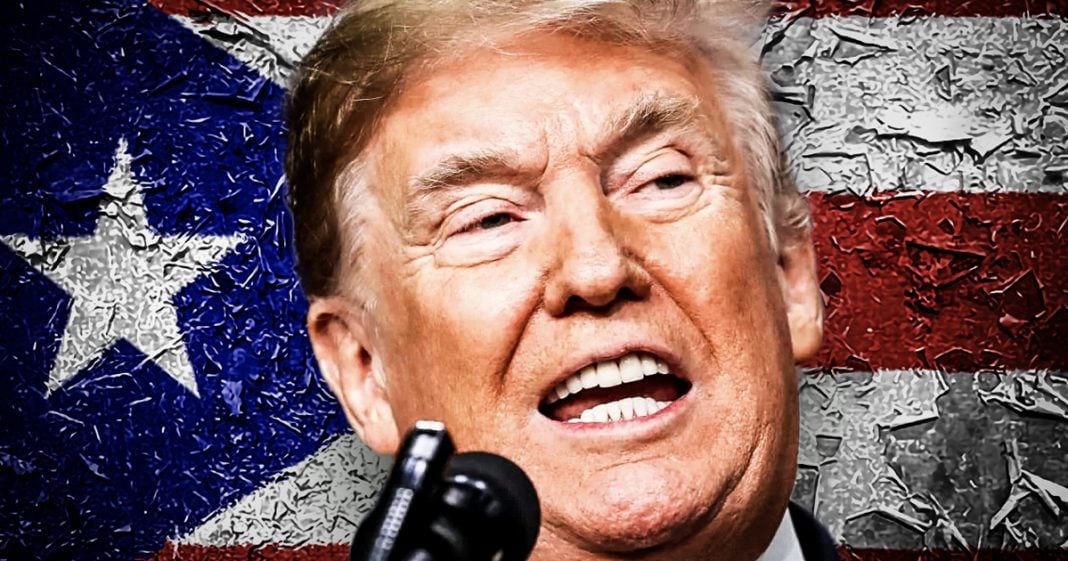 The rebuilding efforts in Puerto Rico after the massive hurricanes of 2017 could grind to a halt if President Trump uses his emergency powers to dip into the disaster fund in order to pay for his border wall. The island has been neglected by the United States for far too long, and the lackluster rebuilding efforts are just the latest example of how the mainland has allowed the island to suffer. Ring of Fire’s Farron Cousins discusses this.

By now, I’m sure everybody has seen Donald Trump’s tweets, uh, other conservative media outlets telling us that the Democrats in the midst of a government shutdown had the audacity this weekend to go down to Puerto Rico and just have a massive party. It also to watch a production of Hamilton down. They’re just partying all weekend while government workers are at food banks and seeking unemployment benefits. That is what was happening with the Democratic Party. Well, the truth is Democrats were actually town there as part of a fundraising effort to help the island rebuild because this administration has essentially turned their backs on them. And here’s where the story gets even more disgusting. We know right now that Donald Trump is considering declaring a national emergency in order to get the money necessary to fund this border wall without having to get the approval from Congress. If he were to do that, the money that he would be using to build that border wall. Do you know where it’s gonna come from? It’s going to come from several different places, but one of those places is from the rebuilding efforts in Puerto Rico. From the devastation of Hurricane Maria in 2017, so while he’s sitting there lying to the public as usual about what the Democrats are doing in Puerto Rico, he’s actually considering screwing the island over even more by taking away money for relief efforts and putting it towards his vanity border wall project to address a nonexistent crisis. What’s happening in Puerto Rico and what has been happening since Hurricane Maria made landfall that is a national emergency. That is something that requires additional funding, but instead this administration at every turn has tried to screw over the people of that island for no other reason.

Then they weren’t super nice to Donald Trump. That’s why he’s doing this to them. Some of the other money that he would pull from to get the money for his border wall is for water projects out in California to help address the drought and we all know that Trump hates California, so it makes perfect sense, right? This man is essentially screwing over anyone that’s not bowing down in front of him and kissing his feet. Fema has already been kicking Puerto Ricans for months now actually, and we talked about this when it first started, they’ve been kicking them out of the hotels that fema was paying for out of the fema trailers that they were paying for, even if they don’t have a home to go back to, so it was just leaving people just out there in the streets.

They’ve reduced their funding, they’ve reduced their presence, even though the island is very far from even being back to rebuilt at this point and now Trump wants to screw them over even further, and here’s what’s very interesting. The the governor of Puerto Rico after Trump was talking about this and announced it, he issued a warning to everybody in the United States mainland because Puerto Rico is part of the United States. Let’s not forget those people are citizens, but he issued a warning to the rest of us and he said, today, it’s us. Tomorrow it could be you. That is the most poignant a warning for the entire Trump administration for everything the Trump administration has been doing from day one to day. It’s us tomorrow. It could be you and we have seen that warning play itself out time and time again since this man came into office and the governor of Puerto Rico is 100 percent right, because taken money from Puerto Rico, taking money from California, that’s not going to be enough for him, so he’s didn’t start taking money from Florida. Hurricane relief from, from relief for the Carolinas, relief from Colorado. They had wildfires to that. Nobody ever talked about, you know, flooding in Texas will take money away from their droughts in the, in the midwest will take money away from there. This is eventually, if it comes to fruition, something that is going to affect any place in this country that has ever suffered from a natural disaster. Trump doesn’t care. The Republicans don’t care. They want that border wall and it doesn’t matter who they have to screw over in order to make it a reality.