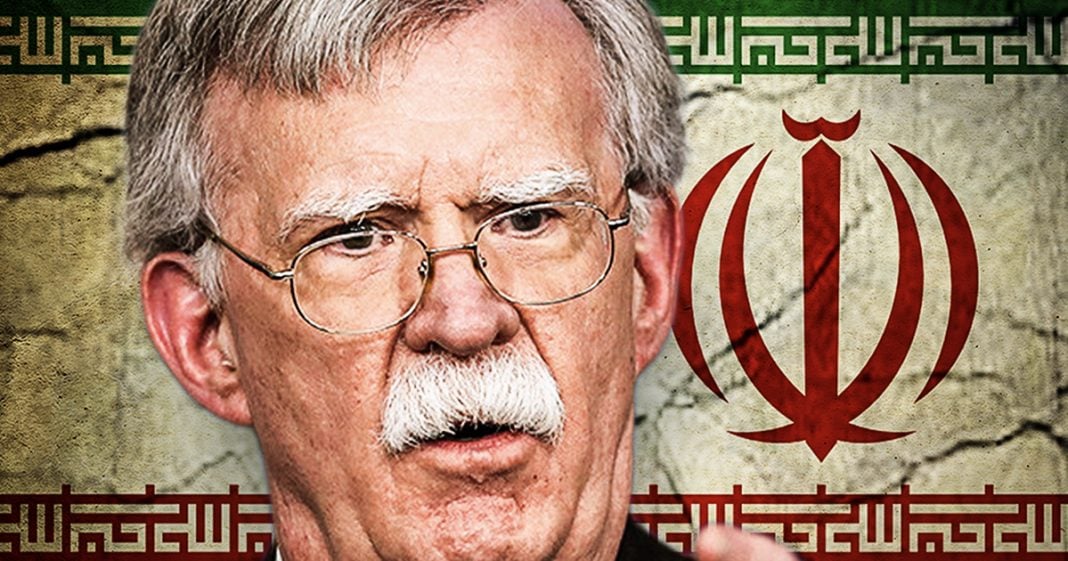 According to a major new report by The Wall Street Journal, Donald Trump’s National Security Adviser John Bolton has been begging the Pentagon to draft some options on how the US can strike Iran. While it remains unclear as to whether or not the Pentagon followed through with Bolton’s request, his incessant war mongering is a very real problem that will likely have massive consequences both in the US and in the Middle East. Ring of Fire’s Farron Cousins discusses this.

This past weekend, almost everyone on social media, on news sites, on the cable news programs, everybody was talking about the two major reports that came out, a one on Friday and one on Saturday, the one on Friday saying that Donald Trump, uh, the FBI was worried after he fired comey that he was working for Russia. So they launched an investigation and this was prior to muller ever entering the picture. The one on Saturday was the fact that Donald Trump confiscated the notes from his interpreter during his closed door meeting with Vladimir Putin. Now, those are two major stories, two major stories that pretty much without a doubt say that collusion was happening. But in the talking of those two stories in the nonstop coverage of those two stories, a major one was glossed over. And this was a story from the Wall Street Journal that showed us the John Bolton National Security Advisor to Donald Trump himself for the last year, has been begging the Pentagon to draft a plan for the United States to states to launch a military attack against Iran.

For the last year, John Bolton has been telling them, you need to give us plans. You need to come up with different ways that we can go strike Iran, a country that right now is not posing any threat to the United States in any way possible so that we can lay these options out and possibly go and start a brand new unwinnable war in the Middle East. John Bolton has been working on this for a year and it gets worse. Folks, because the Pentagon actually did draft several different plans for striking Iran. Now, there is no evidence right now to suggest that the Pentagon gave those plans to John Bolton and other people in the White House. There is nothing at this point that says that Trump even knew that John Bolton was asking them to do this, so technically other than Bolton asking for it and the Pentagon drafting it. That is as much as we know about this story, and that’s even worse because we don’t know if Bolton has these plants.

We don’t know if Trump has these plans and if they’re trying to figure out which one they’re going to go with, they also, in addition to wanting to strike Iran, Bolton has said, you know what, a Pentagon while you’re at it, we go ahead and draft plans and this is all in that report. We go ahead and draft plans for us to strike Syria and Iraq as well, like why not, you know, let’s just get the trifecta and hey, if there’s any other countries in the Middle East that are pissing you off, go ahead and throw those on the lift. Let’s drop some plans for those and we’ll just go on a bombing all throughout the Middle East because that is exactly what John Bolton wants and that is exactly what every single one of us has been warning the American public about. Since the day that John Bolton entered this administration, we knew this would happen.

We knew this is what this man was all about and yet it still happened and it’s still happening. And here’s the scary part, and this is actually why I began talking about those other two massive stories that broke this weekend. The worst things get for Donald Trump. The worst thing starts to look for him and his administration and his future as president of the United States. The more desperate this man has a gun going to become, and there was nothing that unites the American public behind a president more than when we just go and bomb the hell out of another country. And that’s why all of these stories are related. That’s why all of these stories are important because of Trump. Has those plans laid out by the Pentagon of this is your best strategy to attack Iran than at this point? It truly is only a matter of time before those plans become a reality.