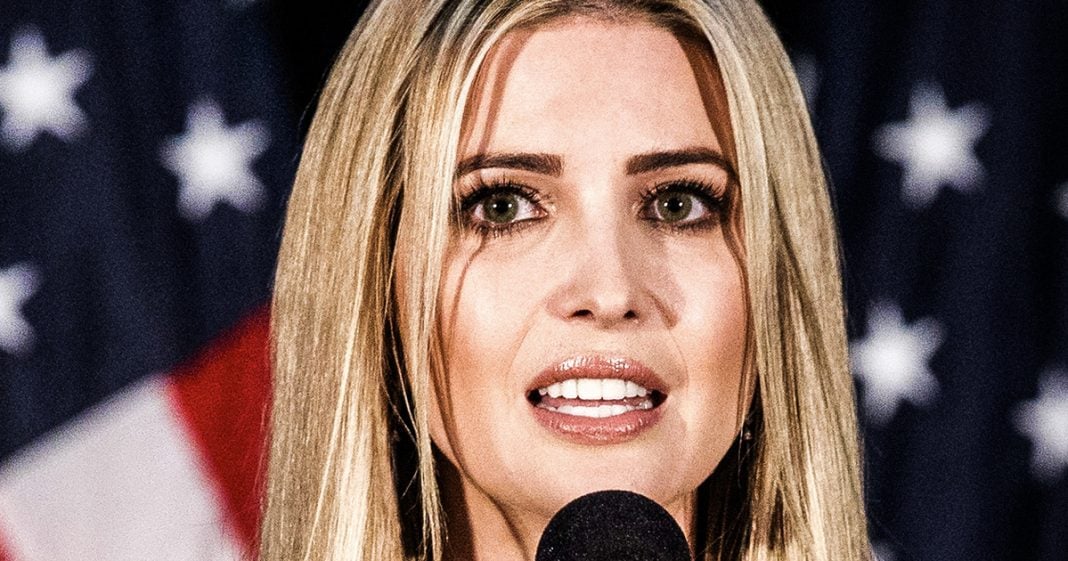 According to a new report by ProPublica, Ivanka Trump might be as corrupt as Donald Trump, and she routinely defrauded investors on the Trump Organization’s business dealings. This is criminal activity, but it is just now coming to light because investigators and journalists are starting to pay attention to how the Trump family made their money. Ring of Fire’s Farron Cousins explains what’s happening.

You know, there’s something I love to bring up and I’ve been bringing it up for two years and I’m probably going to continue to bring it up because at the time it seems so absurd that it was a necessary to call it out and in the two years since then, we’ve been proven right at every turn and that is that Ivanka Trump was never going to be the voice of reason within the Trump administration and what we’re finding out now, and we’ve been finding this out again for the last two years, you know, every month she is just as corrupt and deceitful and disgusting as her father. And here’s why I say that. As we all know, news broke this weekend that Ivanka Trump’s name is actually on a shortlist to potentially become the new leader of the World Bank. Ivanka Trump might become the leader of the World Bank. She has no experience in this, no expertise, no real knowledge to speak of on this issue, but sure, what the hell, because nothing even matters anymore.

Sticker on the Damn Bank and let’s bring on the apocalypse, right? Well, according to a new report by Propublica, Ivanka has been involved in many of the business dealings with the Trump organization where they actively defrauded investors. That is just one of the many reasons why this woman has no place, not only obviously not serving on the World Bank, uh, but also not being a part of this administration in any way. She was directly involved in efforts to defraud investors into the Trump organization and properties that they were developing. This includes, and this is the list for propublica projects in the Dominican Republic, Fort Lauderdale, last vegas, Panama, Soho, Tampa, Toronto, Baja Republic of Georgia and Waikiki. Those are all projects where it was either directly Ivanka or it was either directly Donald Trump, where they lied to the investors about how many units had been sold, about how many people were investing into that particular property.

Nothing that Ivanka were. Donald told these people was actually true, but based on their word, they got more people to come in and invest. That is fraud, that is illegal, and that is something that would land the average human being in this country in prison. And instead it propelled these two morons to the White House. And here’s the thing, here’s the reasons stories like this are just now popping up and they didn’t pop up a decade ago about the Trump organization is a privately held company. You know, the board of directors essentially consists of the Trump family. They’re all involved in it now, if this were a public company, a publicly traded company, there would be other human beings on that board of directors who would be able to say, hold the hell up. You’re lying to people about this and this is going to get us all in a lot of trouble.

But since it is a private company, they didn’t have to do that. They didn’t have to share this fraud with anybody else or let them know what they were doing. And because a lot of times the investors didn’t even realize they were being defrauded at the time, hey, no harm no foul. Right? And that is why they were able to get away with this for so long. But now that they’ve thrust themselves into the public spotlight, people are actually starting to look into what happened with their businesses and yes, some of these instances there have been lawsuits about they have either litigated them quietly or settled them even more quietly, made people sign nondisclosures and all that. So this didn’t leak out to the press, but it’s too late for all of that. Ivanka Trump actively aided her father in committing fraud with their business, and as such, neither of them have any business still being seated in the White House. They both belong in federal penitentiaries, not just for any of the other investigations that are going on, but if you just look at the fraud they committed within their own company, that alone is enough to put them both in jail.