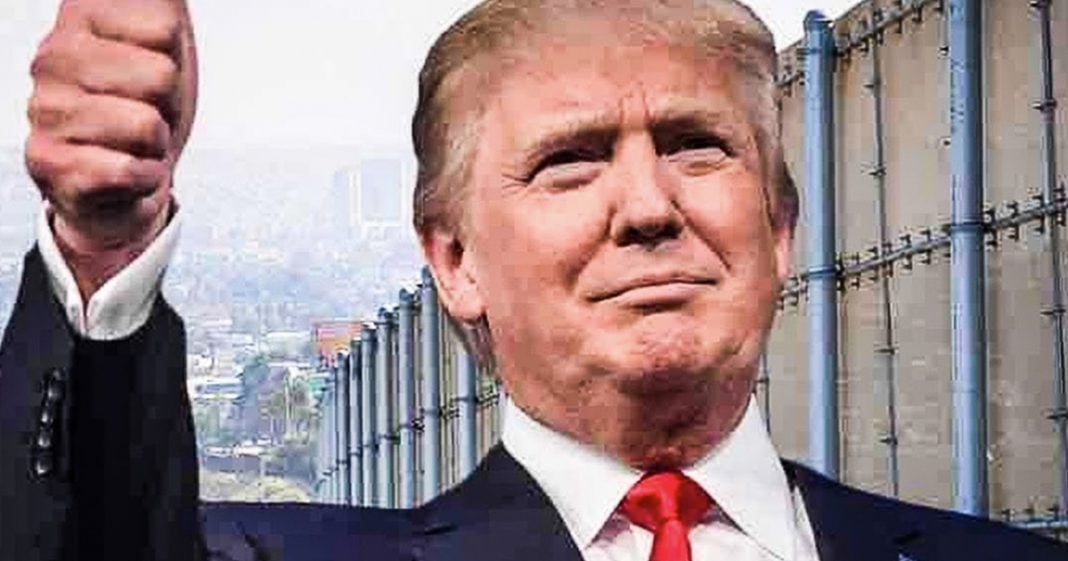 The veteran who started the border wall Go Fund Me has decided that he’s not going to use the $20 million that he raised to build the border wall, and instead will be starting a “non-profit” with high-profile conservatives. This money is going to find its way back into this guy’s pockets, falling in line with his long history of fraud. Ring of Fire’s Farron Cousins discusses this.

As the government shut down, continues over the fact that Donald Trump refuses to reopen it because he’s not getting the funding for his border wall. It’s important to remember that there actually is a little over $20,000,000 sitting out there waiting for Donald Trump to tap into it to build his border wall. The only problem is that that $20,000,000 sitting out there was a scam from the beginning. If you’ll remember a couple weeks ago, a a veteran by the name of Brian Kolfage a started a Go Fund Me for the border wall and as of right now, he is actually raised a little more than $20,000,000. Shortly after he started this Go Fund Me project. It was revealed that this guy has actually been involved with scamming people, raising money, allegedly for one calls and then pocketing himself. Typically he would go out there and try to raise money for veterans causes and then he would pocket most of the money.

He also runs a Facebook page that is filled with conspiracy theories. So the guys, you know, not exactly on the level he is scammed people in the past and based on what we know now with his Go Fund Me, he is scanned people this time because he has said now that he knows, he realizes, he finally learned that you can’t just raise money and give it to the government for them to do a project. So instead he is diverting all of that money to a new nonprofit group that he is starting with some pretty heavy hitters among the right wing world, uh, and the nonprofit is going to be called we build the wall. Here are some of the people that are going to be associated with coal phases. We build the wall. I’m Erik Prince, founder of Blackwater private, mercenary from a David Clark, the scandal plagued former sheriff of Milwaukee County Fox News contributor, Sarah Carter, Tom Tancredo, who according to the daily beast is an immigration hardliner, former Colorado congressman and of course former Kansas secretary of state and voter fraud, enthusiastic Kris Kobach.

Those are the people that this ordinary guy has somehow managed to recruit to start this new nonprofit that is already apparently sitting on about $20,000,000 now Go Fund Me because coalface has announced that he is not spending this money to directly build a wall, has already sent out notices to everyone who donated to this project, telling them that the money they donated as no longer going to go to what they donated it for and they can either respond and say, I want my money back. Or they can choose to not respond. In which case they will get their money back automatically. So at least Go Fund Me is out there saying, hey, we think you probably got scammed. You may want to take your money back from this guy. So or they could email and say, no, no, no. Let him keep it. Nonetheless. This guy has amassed a huge email lists that he is now going to be able to sell to right wing organizations, republican campaigns, and anyone that wants to purchase the email addresses of these exceptionally gullible Republicans who apparently had money to waste.

But more importantly, this new little organization, he starting up, we build the wall, they have actually already started according to a daily beast investigation, getting private donations from right wing funders in order to begin hiring staff, you know, looking for office space. So they’re already getting some big money donors coming into this organization and according to what coal phase is telling us, this is actually, they want to start building parts of the wall themselves. They’re not going to go through the government, they’re just going to go down to Texas apparently. And you start building a wall. That’s the goal of this. Uh, no. The goal of this, Brian, was for you to, once again, scam gullible conservatives. You did a hell of a job. I mean, you’re right up there with Trump in terms of being able to con people out of their good sense. But at the end of the day, you’re nothing more than a con artist.