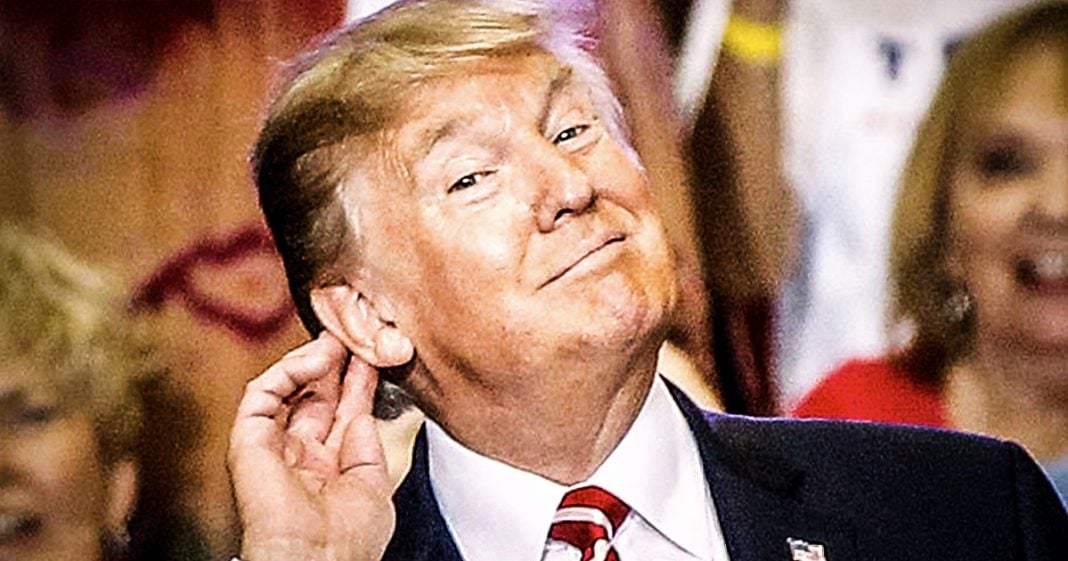 Donald Trump may have the most fragile ego of any person to ever serve in the Oval Office. And after the 2016 convention allowed in some “Never Trump” Republicans that heckled Donald, his campaign staffers are doing everything in their power to rig the 2020 convention to prevent any non-Trump supporters from getting through the door. Ring of Fire’s Farron Cousins explains what’s happening.

If you remember back to the 2016 Republican convention where they officially nominated Donald Trump to be their nominee for president, um, there was a time when never Trump republicans kind of started making a Ruckus on the floor because they did not want Donald Trump to be the nominee. It was embarrassing for the would be president and most of these people, it turns out were supporters of Senator Ted Cruz. And when Ted Cruz gave his speech and did not endorse Donald Trump in that speech, it made Trump angry. And that’s not something that he is forgotten in the years since that 2016 convention. So now the Trump campaign is trying to actively influence the process and essentially rig the upcoming 2020 convention in Charlotte, North Carolina so that Trump does not get embarrassed again. Now I have to start by saying I think it’s really cute that they think that this guy is still going to be in office in 2020 able to run for president again.

But nonetheless they’re doing everything they can to rig the process and keep out any person who doesn’t blindly support Donald Trump. And here’s how they’re doing it. Recently you had former White House aide, a nick trainer. He started this initiative on behalf of the Trump campaign after working closely with Trump for quite a while, and what they’re doing is they’re going out right now with the state Republican parties electing their leaders, you know, these are the leaders that are going to take them into the 2020 convention and they’re trying to influence the process. They’re creating these teams to go out, go to these states, talk to the people running for the party leader, makes sure they’re diehard Trump people, and if they’re not, then they’re supporting the other people in the party who are Trump supporters who also want to be the state party leader.

They’re doing the same thing with staffing for these state Republican parties because all of them are going to be sending delegates to the convention. And that’s the other piece of the puzzle. We don’t want any non Trump delegates. We don’t want any never Trumpers out there holding up your state sign. So they’re actively getting involved in the delegate selection process to make sure that Donald Trump doesn’t get embarrassed at the 2020 convention. Uh, they’re also in some states we’ve seen so far trying to change the rules so that nobody can challenge Donald Trump. A Republican challenger could not emerge to challenge Donald Trump. So they’re trying to rig the entire system, not just to protect this man, but to protect is very fragile ego. Donald Trump cannot stand descent. He cannot stand not being surrounded by blind loyalists. That is what he is all about. It doesn’t matter what policies it is, it doesn’t matter what business venture, as long as the people around him tell him they love him, he is good to go.

He is good to go and he’s been that way his entire life because there is something severely psychologically wrong with this man. All you have to do is feed his ego and he will embrace you. And that’s what he wants to happen at this Republican convention in 2020. He wants to walk into a room of thousands of people and have them just faint in adoration for him, and then he will embrace them. Then he will tell them he loves them and they’re so great, but if there is dissension in the ranks, if there’s a raucous on the floor of never Trump republicans, that not only is that going to make them unhappy, but it’s also gonna make him very sad because his fragile little ego is going to take another hit when he realizes that most people in this country really can’t stand him, and more importantly, can’t wait for him to not be president anymore.