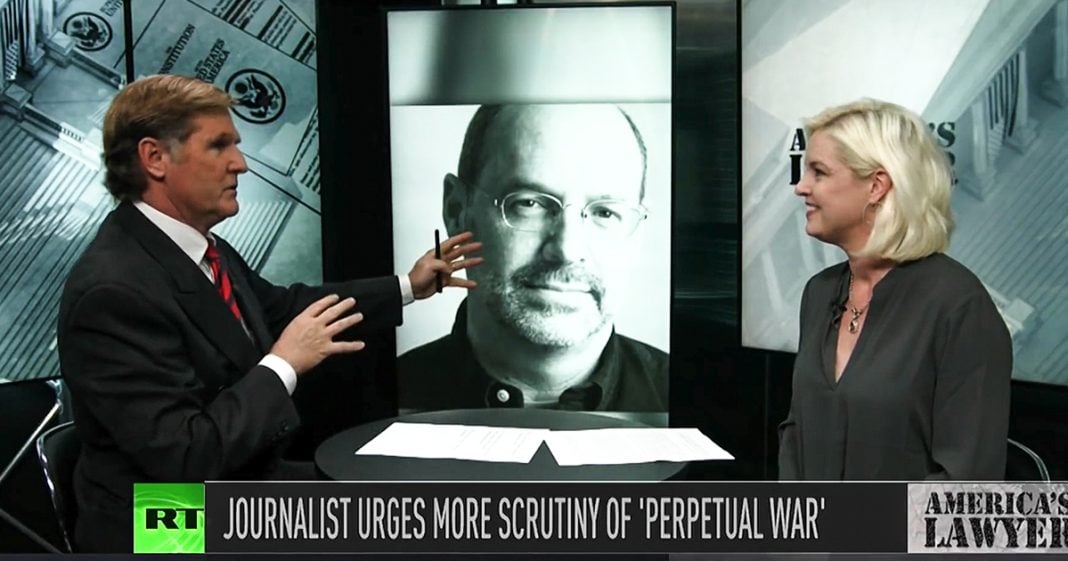 Via America’s Lawyer: Legal Journalist Mollye Barrows joins Mike Papantonio to talk about the scathing resignation letter from an NBC commentator who claimed that he couldn’t take the network’s constant pro-war propaganda anymore.

Mike Papantonio:             Military analyst and journalist William Arkin said goodbye to NBC after three decades and he pulled no punches about why he was leaving. Arkin explained his decision in a 2000 plus word resignation letter he sent to colleagues last week, citing a lack of real reporting at NBC’s support for endless war in this world. Legal journalist Mollye Barrows joins me now. This is not, Mollye you know, we’ve done, we’ve talked about MSNBC, we’ve talked about NBC. We always start this discussion in this, first of all, people need to go online and read the entire. It is scathing.

You’re not going to buy a cruise missile, right? So as you’re watching the ad, you’re going to wonder why they’re advertising on MSNBC. It’s because these cats like Phil Griffin and Andy Lack are sucking in the money and in exchange for sucking in the money from advertisement money, they’re willing to say whatever has to be said. What’s your take?

Mollye Barrows:                You’re exactly right. Now, he didn’t go into a lot of those details, but basically the picture that he painted is, hey, I’m a 30 year journalist, military analyst, author. I’ve been working at NBC on and off for three decades and every single time whether I’ve been covering 9/11 or I’ve covered the Cold War, when I tried to cover the real issues that led to us being in these conflicts to begin with, those issues get brushed aside. No matter what angle that he pitched, basically they didn’t want to hear it. They only wanted to continue the war cry.

There was only room for one war cry and that was to go along with whatever our military leaders set at the time needed to be done. So if the war on terrorism called for going in and multiple strikes on Afghanistan with no real clear plan of leaving that region or what our plan of success would be in the Middle East. When you know, Trump even talks about leaving Syria, he hits on a lot of broad issues and in a nutshell he says, yes, we have a trump media circus. We’re wrapped up paying attention to all the little stuff and we’re not paying attention to the big stuff, but he’s brinign up points.

Mike Papantonio:             Okay, look, Phil Donahue, I lay this at the feet to MSNBC because it’s so tangible there. I know this Phil Griffin cat. I know how they think. I know Ed Schultz, of course, who you know used to be the anchor on this program. He and I were dear friends and he would often talk about the idea that they would not let them be critical of military issues.

Mike Papantonio:             Just like, just like TPP issue. Ed Schultz understood how dangerous the TPP issue. He talked badly about Hillary Clinton. They wouldn’t let him do this. And so, Phil Donahue, you remember Phil Donahue?

Mike Papantonio:             Phil Donahue was the guy that came out against Iraq, one of the few people who had enough courage around NBC. All the other NBC cats had these big maps on the floor and they were talking about embedded journalist in the, you know, they’d follow around the map.

Mollye Barrows:                              It’s the entertainment game. It keeps you focused on the little stuff in the middle. And you talk about, oh gosh, it’s poor Obama can’t stop these inmates from being waterboarded. He can’t go close Guantanamo Bay and this is what Arkin was saying that it becomes, it’s just too big for him to be able to take on some of these big problems when they’re not even addressing the real problems.

Why can’t we shut down Guantanamo Bay? What are the, what is our foreign policy when it comes to Syria, Afghanistan, and the war on terrorism, what does success look like? We’re not really holding our military leaders accountable. And he was saying, and we’re not even reporting on their mistakes.

Mike Papantonio:             Progressives to some degree, I mean the really fringe progressives, have become warmongers all because they hate Trump so much.

Mike Papantonio:             No, it’s not journalism. They are absolutely, NBC I’ll say it again, is part an extension of the military complex in this country.

Mollye Barrows:                Well, thank you Pap and thank Arkin for getting this conversation started too.

Mike Papantonio:             No question about it, he’s an interesting character. Thanks for joining me, okay.