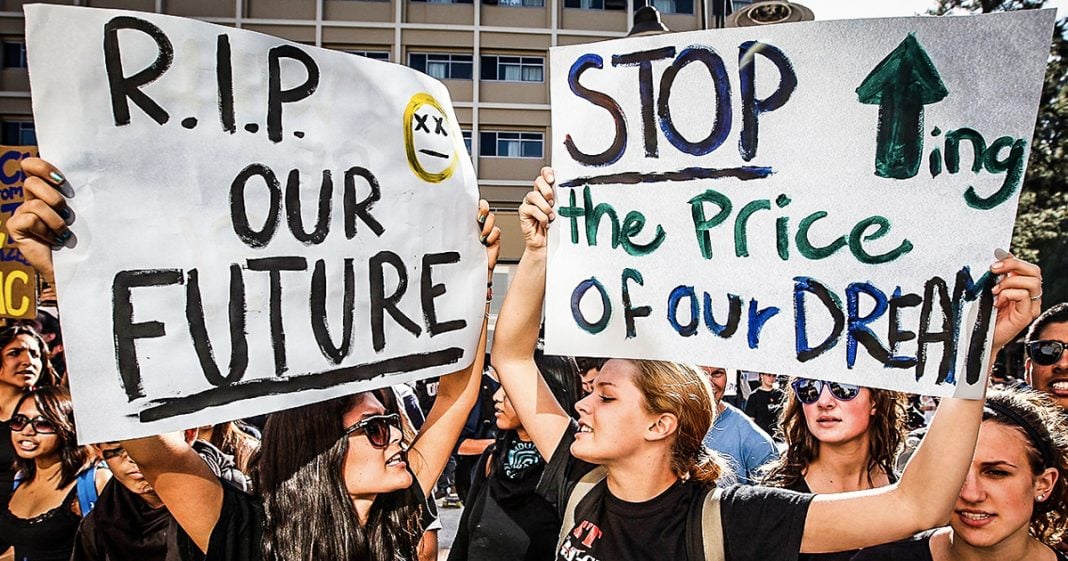 According to a new round of polling, a majority of all voters in the US (including majorities of Republicans and Independents) want Congress to address the issue of student loan debt and make it easier for students to afford college and erase debt. This is just the latest in a long line of issues that voters of all parties want Congress to address, and voters are all leaning to the progressive side on these issues. Ring of Fire’s Farron Cousins discusses this.

According to new poll conducted by politico, the majority of Americans, both Democrats and Republicans believe that a top priority for Congress should be finding ways to lessen the student loan debt burden here in the United States and also increasing funding for k through 12 public education majority’s very strong majorities of both parties, including independence, a believe that those should be priorities for Congress, reducing student loan debt and giving more money to our schools, and the reason I’m bringing that up is because this is just the latest in what is becoming a very long line of polling data that shows that the majority of people in this country left right and everything in between. Overwhelmingly support progressive policies. Reducing student loan debt has been a hallmark of the left for a very long time. Not The center left, but the good left the people to the, I guess you’d call far left who have been talking about student loan debt for years, but been ignored by those people on the left who are closer to the center.

It’s the same thing with Medicare for all overwhelming support. Another new poll came out today showing that there was massive support for a medicare for all plan polls show the majority of people, including Republicans, want a green new deal. They want to expand social security. They’re okay with expanding Medicaid. All of these are progressive ideals that progressive candidates have been pushing. So the big question is, what is the hold up Congress? You have your mandate, you have your polling data, you see what the American public is wanting you to do. And yet here we are with Nancy Pelosi leading the House of Representatives and rather going full tilt on a green new deal. She creates this second select sub committee on climate, Ocasio-Cortez, even though she spearheaded the green new deal with help from the sunrise movement. Um, she’s not gonna be a part of it. They’re not going to have subpoena power.

They’re not going to be able to look into this. They’re not going to be able to do that. So yeah, way to, you know, really water it down for literally no reason. Their Polo. See you had the public behind you. You had your midterm mandate, you had members of Congress getting angry that it wasn’t happening, and so what did you do? You capitulated to no one and just said, you know what, I’m going to water it down and make it not what it needs to be just because why not I’m speaker now. You’re not going to be speaker for very long if that’s how you continue to things. If you don’t bring up things like Medicare for all debt free college, uh, the green new deal, expanding social programs, your tenure as speaker is going to be shorter than it was the first time the American public has spoken. And if Democrats want to get Republicans on board with their party, then you got to go left. That is the only way to win. Poll after poll, after poll, after poll has shown that to be the truth. You want to win over those Republicans. The answer doesn’t lie in the center of the aisle. The answers are all on the far left.