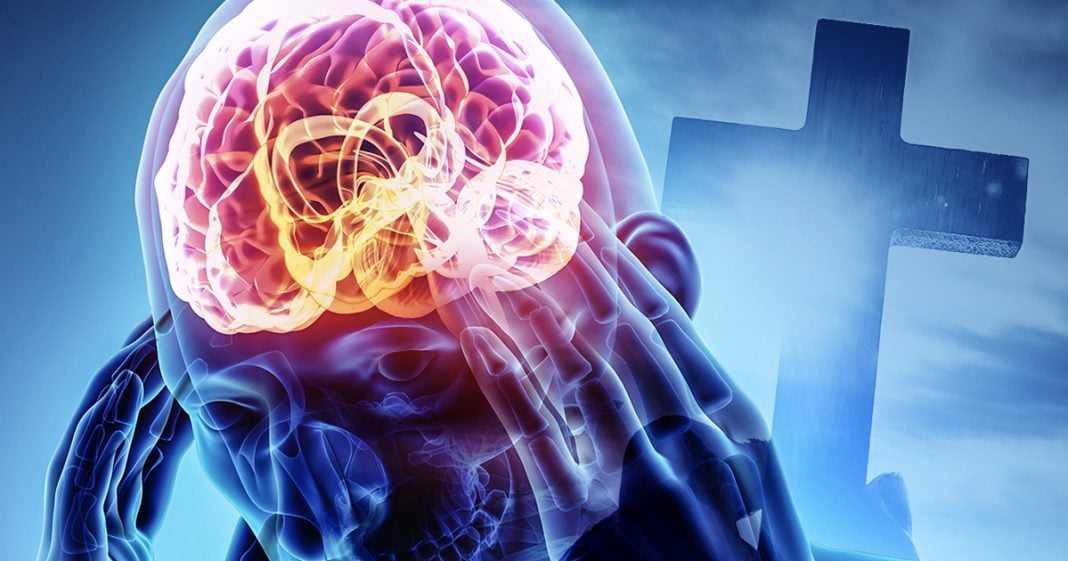 According to a recently-published scientific study, neuroscientists have been able to confirm a link between an improperly functioning prefrontal cortex and religious fundamentalism for the first time. So all of these frauds out there claiming we have to live our lives according to the Bible might actually just be suffering from a mild form of brain damage. This is a major finding, but don’t expect the media to give it the attention it deserves, as Ring of Fire’s Farron Cousins explains.

According to a new scientific study published in the Journal, Neuro Psychology, uh, there is a link that scientists have now confirmed between damage to a person’s prefrontal cortex and religious fundamentalism. Scientists who went back and looked at ct scans of Vietnam veterans who had had some form of damage to their pre frontal cortex and then gave them tests to assess their religiosity, found that there is a direct link between brain damage and religious fundamentalism. Now, here’s the thing. This is what they explained throughout this study. I encourage everyone to go read this. This is absolutely fascinating, but the prefrontal cortex is the part of the brain that helps control creativity, open-mindedness curiosity. You know the things that actually make us question what we see, what we hear, what we know when there is damage to that, it hinders that particular ability so people do not question. They accept something for what it is, and now with religious fundamentalism, those things are not based in logic and reason already. And they have found that people who are fundamentally religious do not question those beliefs at all ever, and now they believe they may have found out why. And there’s many things that can cause damage to a person’s prefrontal cortex, drug abuse, alcohol abuse, a blunt trauma, you know, ptsd, things like that. All of them and many more can damage this part of the brain. It’s very delicate.

And here’s where we are. And this study is important because in too many parts of the world, including parts of America here, a religious fundamentalism reigns supreme, and I’m not just talking about the average person who says yes, I believe in God and I go to church every Sunday, sometimes every Wednesday. That’s not who these people were looking at. They are looking at the people who lived their life according to a document that they believe was written by God himself or his prophets. Those people who believe that every word in that book is 100 percent true and they live their life by it. And furthermore, they want to force it upon everyone else as well. This is not your average everyday religious person. These are the people you see screaming at other people on the street corners while holding up a Bible that’s the kind of people that have this affliction and that’s what scientists were trying to determine, is this just who they are or is there a psychological neurological reason that they behave this way and they believe that they have found the link, so the next time you see somebody standing on the street corner screaming at you to live your life by the Bible, those may actually be cries for help because this person is not mentally stable, at least according to the available research.

They need help and this is a problem that has to be addressed. Scientists are discovering more and more. This is not the first study that has linked brain damage to religious fundamentalism in the last 12 months and I don’t believe that it’s going to be the last one that we see of this. The link is becoming clearer and clearer. These people need help and scientists are doing what they can to help them, but at the same time, this, and I cannot stress this enough. This is not an attack on religion. This is not an attack on the way anybody lives there lives which you do in private is fine. You want to go to church, go to church, believe in God. I don’t care. It doesn’t bother me or affect me either way, but it’s when you come out and you try to impose your beliefs on another human being and you refused the question, anything about those beliefs, that’s when it becomes a problem. That’s when it goes to full blown religious fundamentalism and that right now is what scientists are trying to fix.