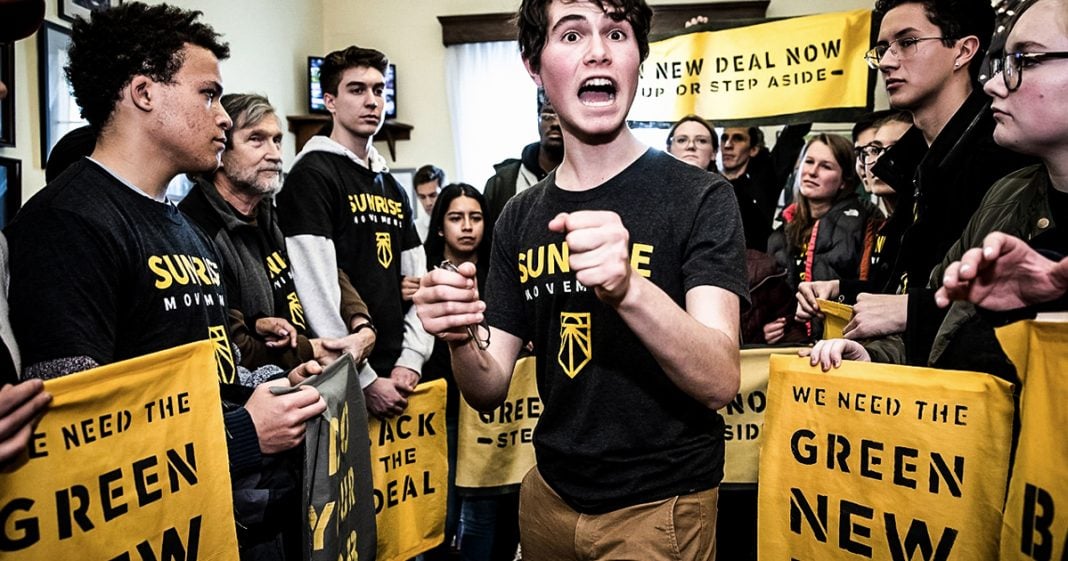 Activists with The Sunrise Movement are launching a cross-country tour to promote and explain The Green New Deal to people all over the United States. This kind of movement is necessary and powerful, as most people, even though they support the plan, have no idea what the deal would actually do. This movement has life, energy, and boots on the ground, and the Democrats need to understand that this is a policy they have to get behind and push. Ring of Fire’s Farron Cousins discusses this.

There’s still some debate among house Democrats as to whether or not the Green New Deal as it stands right now is ever going to become a reality. Nancy Pelosi at first seemed a little wishy washy on it. You know they were going to have this committee, but then they said, well, we’re going to have the committee, but you’re not going to have subpoena power. Then they did away with that committee, created a different select committee, watered it down a bit, so at least it gives the appearance of caring about the environment, but it will likely never bear any fruit. Nonetheless, the Green New Deal is not dead, and do you know why? It’s not first and foremost, because we have new freshmen members of Congress who are not going to let it die. There’s also plenty of non freshmen members of Congress who aren’t going to let this issue go, but most importantly there is a group called the sunrise movement, the ones who have been pushing this Green New Deal for over two years now and they’re not giving up.

In fact, the sunrise movement recently announced that they are about to go on a massive coast to coast tour of the United States, recruiting new activists, teaching them how to confront politicians about the Green New Deal and climate action, and at the same time, educating the public about the need for a Green New Deal and what this Green New Deal might actually do for months. Already. The Sunrise Movement have been, uh, uh, teaching activist how to go out there, talk about these issues, what to say to politicians, how to push them on these issues, holding webinars, doing everything necessary to keep this issue at the forefront of the minds of American voters. And they’ve been hugely successful with it. Just like any movement in the United States. If you want to sustain it, if you want to keep it going, then you have to keep building upon it. And that is exactly what the sunrise movement is doing with their plant tour that they’re about to embark on.

And a couple months. And this is desperately needed here in the United States. We face no bigger threat as a country than the threat from climate change. The people at the sunrise movement understand this. A lot of our new members of Congress and a lot of people who’ve been there for awhile, they understand it as well and they’re going to keep pushing. They’re not going to accept this watered down committee that Nancy Pelosi created, and yet it’s a great first step, but it’s not enough. We had a better plan, but you screwed it over and you went with the weaker plan. Sunrise movement isn’t gonna. Stand for that and they’re gonna. Make sure that everybody in this country understands the threat that we face and how we can address it. That’s the kind of thing that builds a sustainable and powerful movement here in the United States and for far long. It’s something that the environmental movement has been lacking. Luckily, the sunrise movement understands that if you want to make change in this country, you can’t sit back after you win an election and say, we did it. No, that was step one, and they are more than ready and they’re gearing up right this second to start step two of their process, which is going to be even more powerful than step one. And that midterm election turned out to be.