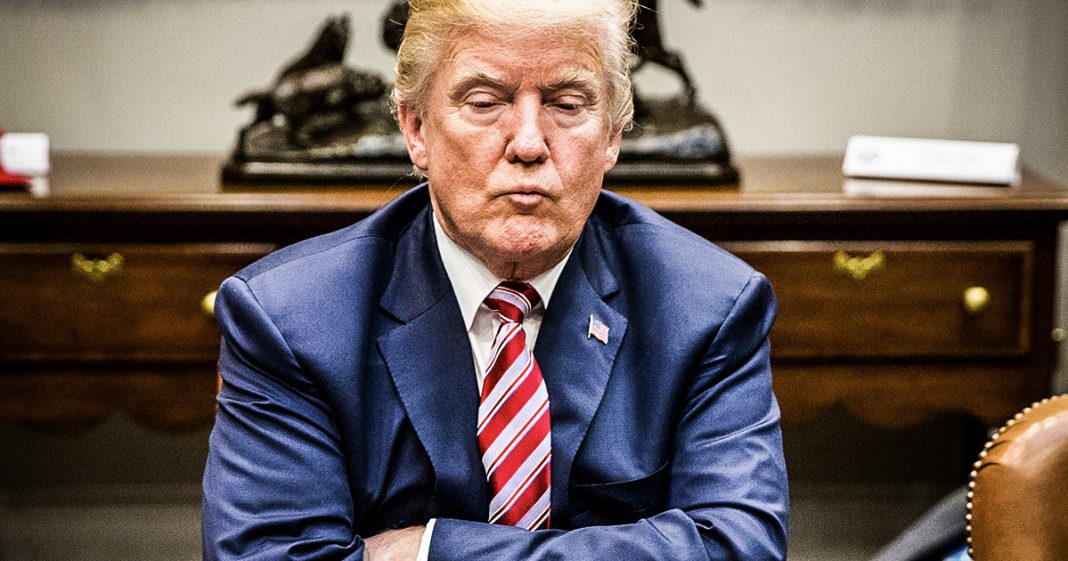 According to the DC water board, the White House is way past due on their quarterly water bill payment and they owe more than $16 million. The board has joked about potentially shutting off water to the White House until the bill is paid, and that’s not a bad idea. Trump has a history of not paying his bills, his workers, or his contractors unless he’s forced to, so the water board may want to consider turning off the spigot. Ring of Fire’s Farron Cousins discusses this.

Before Donald Trump ever even became president of the United States, we knew that this man had a problem paying his bills, wasn’t something he ever liked to do. Your stories emerge. Law suits emerged. A old lawsuits that had been settled, emerged showing that he wasn’t paying his workers. He wasn’t paying property taxes, he wasn’t paying his contractors. This guy does not like to pay his bills and sadly once he became president of the United States, he did not change his ways and right now the White House owes $16,000,000 in back water bills. In fact, they owe so much and have failed to pay for quite so long that the DC water board was joking recently. About how long do we wait before we just shut off the water at the White House? Here’s the thing. The a Treasury Department is in charge of paying these bills and it’s not just for the White House, it’s for other government offices and agencies.

They pay their bill every quarter. While this past quarter, which was before the end of the year, the Treasury Department before the government shut down by the way, said we owe $60 million, we’re gonna pay 11 million, we’re not paying you that last $5 million. So paying the partial bill rather than the bill in full, uh, to companies like this utility companies that, that’s pretty much the same as just not paying it at all. You know, if we were to go and pay our water bill, but only pay half of it or two thirds of it, they’d still shut our water off because that’s what they do. That’s why they billed you for the full amount. Instead of saying like, add, just pay what you can and then come back later when you have it. Yeah. That’s not how utilities work. And that’s why these people at the DC water board are actually kinda thinking like, do, do we shut off the water for the White House and these government buildings because they told us they’re just not going to pay it.

That’s not how it works. But for Donald Trump, that’s always been how it works. That’s why this man got soon, so much when he was in the private sector, he thought he could get away with not paying people or maybe down the road, pay them less than what they had earned as a result of a lawsuit, but that’s not how it works. When you’re dealing with the federal government itself, they had the money to pay the water bill. This happened before the government shut down. There are zero excuses. However, members of the Dec waterboard have said that they’re not going to shut off the White House’s water right now, but if this continues, you know, it may take up to a year of not paying their bills, but if it hits that point than they are damn sure going to shut off the water for the White House because Donald Trump won’t pay the bill.