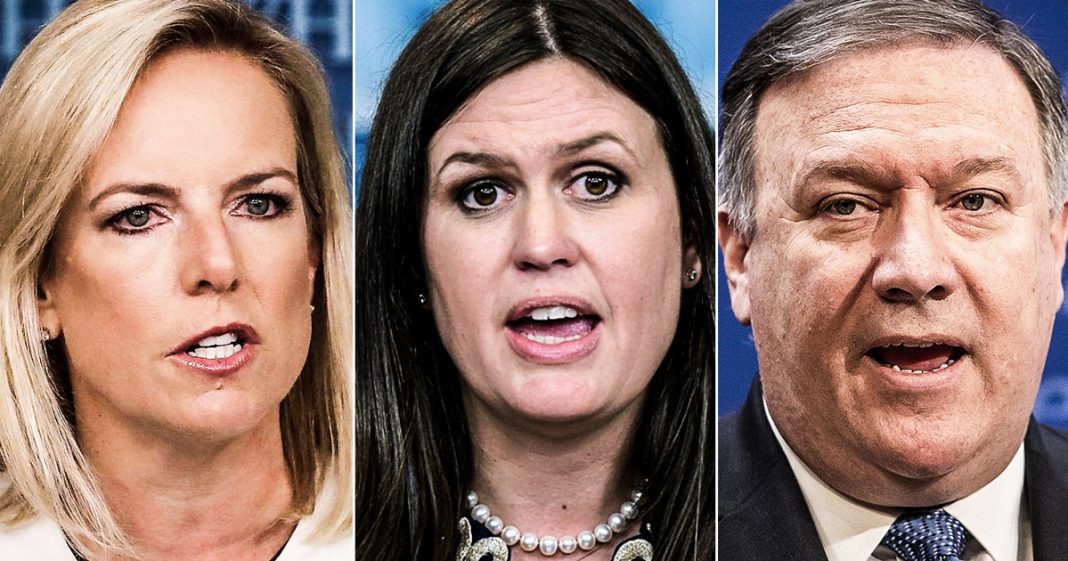 Even after Sarah Huckabee Sanders got busted for lying to Fox News host Chris Wallace about the border crisis, several officials from the Trump administration have been allowed to go on Fox News and repeat those very same lies, including Kirstjen Nielsen and Mike Pompeo. The lies won’t stop, even if the border wall ends up being constructed, and Fox News is more than happy to help the administration spread them. Ring of Fire’s Farron Cousins discusses this.

So this past weekend, Sarah Huckabee Sanders, as we all know by now, when on Fox News with Chris Wallace tried to push the administration lies about this crisis down at the border, and Chris Wallace called her on her, said, that’s not true. You’re not telling the truth here. Well, you would think that would be the end of it, right? Fox News of all people called the administration out said, you’re not telling the truth, so let’s move on and find a new talking point. Unfortunately, Sean Hannity didn’t actually get that memo or he got the memo and he said, I’m going to do whatever the hell I want anyway, because I’m the biggest cheerleader for the Trump administration. So Wednesday of this week, he brings on Homeland Security’s Kirstjen Nielsen, where he asks her about all of the thousands upon thousands of people on the terror watch list that we have apprehended at that southern border. And he let her get away with saying yes, yes we have.

So Sean Hannity set up the live for her and all she had to do was say, well, that’s not quite true. And she couldn’t even do that. Kirstjen Nielsen couldn’t even do that. And Sean Hannity was right there helping her pedal it. Here’s the truth. By the government’s own admission, they typically don’t catch people on the terror watch list on the borders. In fact, uh, they did, however, in 2018 catch more people coming across the Canada border into the US who were on the terror watch list or whose names matched the name on the terror watch list than they did at the southern border. And yet you’re not hearing all the clamoring for a northern wall to keep all the horrible people out. Just the southern one, the southern one that actually poses less of a threat by the government’s own admission. Then our northern border. Now I’m not saying we should build a wall between the US and Canada.

I am anti wall. But here’s the thing, as long as this administration continues pushing out these lies, there’s going to be at least a fraction of people in this country who are going to continue to believe it. And those are the people who are going to continue commenting on Trump’s twitter feed saying, build the wall, build the wall. God bless you, president Trump, you’re the greatest president we’ve ever had. And if you think I’m exaggerating those comments, seriously, go to any tweet Donald Trump sends out and look at the comments. You will literally find someone saying exactly the things that I just said. It’s disgusting. It’s repulsive. Most of them are bots, but some of them are actually thinking and breathing and human beings, and that’s terrifying. But what’s even more terrifying is that they’re buying into the nonsense being spread by this administration. There is no crisis on the southern border.

The only crisis down there are the children who are dying and this administration’s internment camps because that is what they are at this point. These are internment. That’s the crisis. That’s where we need to declare a national emergency and free those children. But instead Trump’s throwing his temper tantrum. He wants his vanity project. He wants this wall that just yesterday we found out could be easily solved through. So it really is completely worthless and useless. Nonetheless. He wants to do it, and Fox News is damn sure gonna, make sure that they are right there to help him push whatever lie he needs to sell in order to construct this border wall.