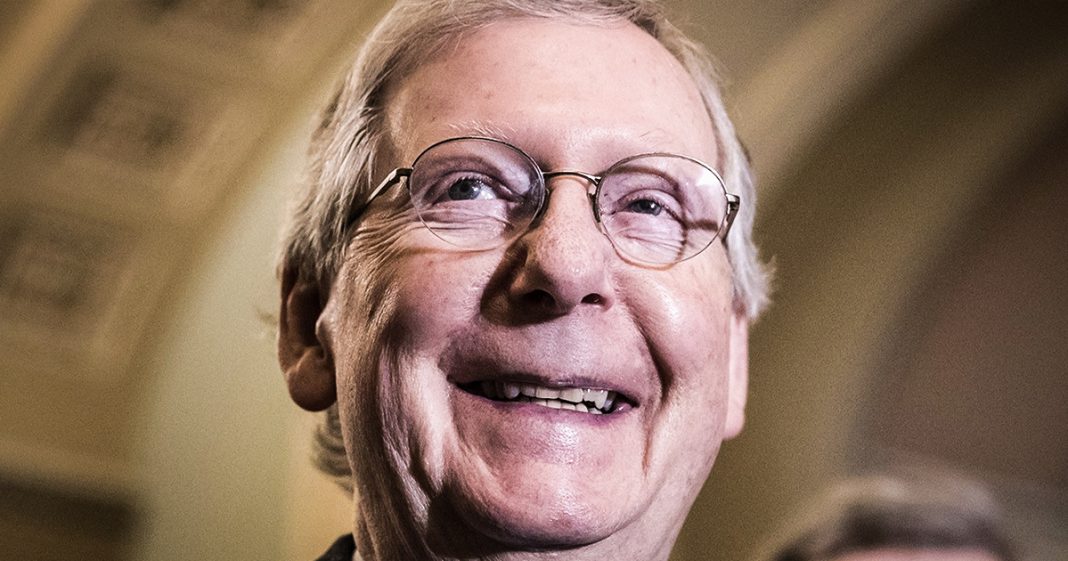 Senate Majority Leader Mitch McConnell blocked a series of bipartisan bills this week that would have reopened the federal government, showing his Party that he will not abandon Donald Trump. But McConnell is finding that his ranks are shrinking as more and more Congressional Republicans become willing to reopen the government without border wall funding. Ring of Fire’s Farron Cousins explains what’s happening.

On Thursday, Senate majority leader Mitch Mcconnell twice had the opportunity to reopen the federal government and twice denied that opportunity to actually happen. Here’s what happened on Thursday in the Senate, there were two separate bills, one that would have provided funding for the Department of Homeland Security, uh, another that would have provided funding for all of the other government agencies that are currently shut down through September 30th. These were Democrat backed bills, a similar to ones in the House of Representatives that also have bipartisan support over there. Mitch Mcconnell refused to allow discussion on these bills, effectively killing them. So as of right now, Mitch Mcconnell’s, the one guy standing in the way of reopening the federal government. Here’s why that’s important is things we’ve been talking about all week. First and foremost, today, our federal court system runs out of money. Our federal court system runs out of money. We have furloughed government workers applying by the thousands for unemployment benefits, which is going to put an enormous strain on this system.

We have hundreds of thousands of government workers either working and not getting a paycheck or not working and not getting a paycheck. And here’s the thing today, this Friday today, um, their, their stories going around and even pictures in some cases of air traffic controllers showing the paychecks that they got today for the last couple of weeks. And the paychecks read $0 and zero, zero cents. So air traffic controllers, you know, the folks who already have a crazy stressful job trying to make sure planes don’t crash into one another. They’re not getting paid for it at all. TSA agents are not being paid. You know, I, I’m old enough to remember when there was a whole lot of concern over the safety of air travel in the United States. You know, that’s why the TSA exists because we were so concerned about somebody horrible getting through and doing unspeakable acts of terror here on the United States soil.

And now we’re just like, screw it. We’re not going to pay you. We’re not going to reopen the government. Even though you are vital. And I know there’s some conservatives out there who call these folks non essential. If you think air traffic controllers and TSA agents are nonessential, then you absolutely know nothing about American history or world history for that matter. These people are vital. These people are suffering. And Mitch Mcconnell doesn’t give a damn. Mitch Mcconnell would rather show his party that he is not going to bend, he is not going to break. He is going to stand behind Donald Trump for this unnecessary border wall. And Mitch Mcconnell was very soon going to find himself with allies that include maybe Lindsey Graham. And that’s probably about it. Uh, maybe Steve King over on the house. But, uh, Republicans are starting to break. They’re starting to fracture. I can, even last week, there will were many Republicans in the House of Representatives willing to sign onto bipartisan legislation, had just reopened the government without the border wall.

As this continues, as this drags on, we’re going to see more republicans breaking ranks. We’re already seeing them come out in the media and say, this is unacceptable. We got to reopen. We’ve got to do it. And ironically, on Wednesday of this week, Donald Trump came out and said, no, there’s total unity behind me. All Republicans are with me. They’re not. You got two or three powerful ones behind you. And the rest of them are freaking out because they understand when they go back to their constituents, they are going to be the ones blamed for this disaster. And they don’t want to face those consequences. They don’t want to lose an election because Donald Trump and Mitch McConnell refuse to admit that they’ve screwed up. But that is exactly what’s happening today.