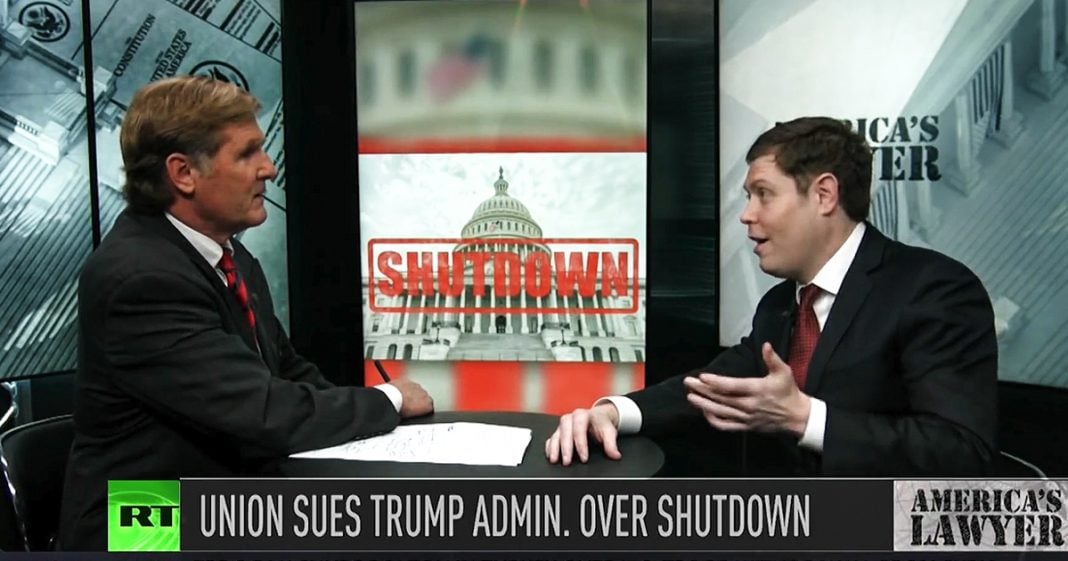 Via America’s Lawyer: Mike Papantonio is joined by Attorney Steve Babin to talk about a lawsuit being brought by federal workers who are being forced to work without pay during the government shutdown.

Mike Papantonio:             As unpaid federal workers struggle with tough financial choices during the shutdown, a federal employees union has decided to bring a lawsuit against the Trump administration. We’re joined by attorney Steve Babin to discuss whether this lawsuit has merit and maybe where it’s going to go. Steve, we’ve seen this before. We saw 2013 lawsuit was brought on behalf of union workers.

Mike Papantonio:             Okay, well, so here, here’s the way this is problematic. First of all, if I look back into 2013 lawsuit, a judge did say if my, if my memory’s correct, a judge did say, yes, we’re going to give you these double damages. Some of those people are still waiting to be paid, and so I guess it’s good on paper, but what does it, how are, you know, let’s humanize this. How are federal workers, how were they affected by this? Because we, we miss that, don’t we?

Steve Babin:                         I think we absolutely missed that Pap. I think that the administration itself misses it too. It says, it’s a sign of how detached the Trump administration is from day to day realities of the government workers. But in America today, if a regular average worker, say a TSA employee goes two weeks without pay, well that’s going to be problematic and if they go a month without pay, it could be detrimental to their family.

So on a day to day basis, you have the office of personnel management issuing emails and letters to the employees saying to do things like this with your landlord, if you can’t pay rent this month, offer to paint the house or do some maintenance.

Mike Papantonio:             Wait, back up, back up. The government is involved in the, and the unions and the government I guess are trying to tell these people how to stay alive. So this…

Mike Papantonio:             So this first anecdotal information, go paint a house if you can’t pay the bill?

Steve Babin:                         Yeah. These are, these are sample letters that were provided online by the office of personnel management. They were, they were taken down after they got some bad publicity. One of the, the options was to tell your landlord, I’m not getting paid right now, I will, I’ll paint the house or do you need some maintenance done? If that person may or may not have some, some maintenance skills and that’s how you stay alive and get the rent paid.

Mike Papantonio:             Do the unions, I’m curious, have the unions planned on, surely they’re looking ahead. The unions are taking money from employees. They know that shut down is always possible. Have they put together any kind of workable fund that I, I don’t know what to call it, an emergency distress fund. I mean well look, we’re asking federal firefighter to go put their life on the line and oh, by the way, Mary, oh by the way, Joe, we can’t pay you for that, but we’re good for our word.

Well no they’re not really good for the word because we know what happened in 2013. 2013 the federal government said, yes, Mr. Firefighter, we owe you double and they still haven’t paid them to this day. These people have not been paid that double. What’s your take?