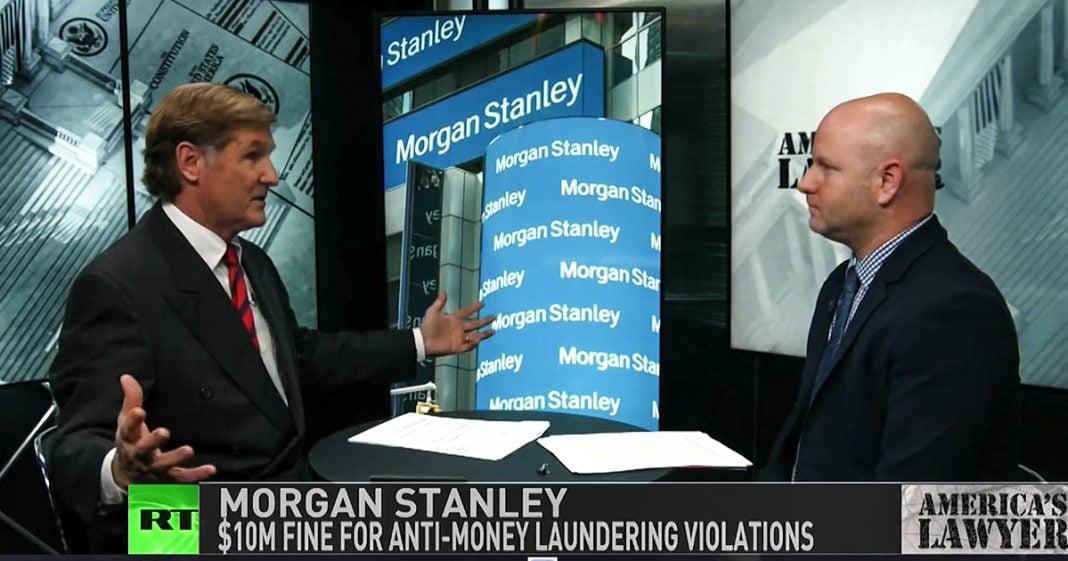 Mike Papantonio:             Banking giant Morgan Stanley has agreed to pay $10 million dollars after regulators discovered that the bank wasn’t complying with anti money laundering regulations. You know, here again, how many times have we done the story on HSBC? Let me lay it out real quick. They’ve heard it before. I think it’s such a critical story. Bankers now have figured out that laundering money is very profitable. Who are they laundering it for? We found HSBC and a half a dozen other banks that were laundering money for drug cartels.

I mean this sweetheart deal where they paid $1.9 billion dollars on HSBC. Nobody went to prison. They signed a document that admitted to criminal conduct, one to write, 12 elements of criminal conduct that anybody else would be in prison today for. You know who cut the deal? Mueller, Loretta Lynch and Comey. I want you to think about that. These are, you always hear about this, you always hear about this inside game that exists in Washington.

Who are these people that move from, they move from board of directors here, to the board of directors there? They move out of justice and move to this board of directors case, story. So all of a sudden we’re now looking at this and we find out that the people who actually negotiated this made it happen was Mueller who now is investigating Trump and I guess everybody else in the country. This is the guy that cut the sweetheart deal with HSBC.

Mike Papantonio:             So give me your take on how, how are we affected when we say to Morgan Stanley, gee guys, we know you’re laundering money, pay $10 million dollars and go your way. What’s your reaction to that?

Farron Cousins:                  Right, they had, you know, after the big banking collapse, these new rules were put in place that said, this is what banks, you’re legally required to do to make sure you’re not laundering money for terrorists or drug cartels, and for six years Morgan Stanley just wasn’t doing it and they had tens of billions of dollars coming through their bank that they knew this was probably dirty money. They can’t say for sure that it was or wasn’t, but they knew that it probably was. And so now they say, okay, well you’ve made billions off this, so we’re gonna, we’re gonna have to fine you 10 million, million with an m not billion with a b. After they made billions in profits from no complying.

Mike Papantonio:             Here’s what I think is even more important. Morgan Stanley knew that HSBC and a half a dozen other banks had been caught. Dirty, filthy hands where they’re caught laundering money for terrorists. They’re caught laundering money for drug cartels in Mexico. They get away with it because Mueller, Loretta Lynch and Comey say, well gee, we can work out a deal here can’t we? You pay one point $9 billion dollars. Nobody gets prosecuted. Not one soul was prosecuted in that case.

Even though you at HSBC had to sign off on a document that we’re 10 elements all admitting, yes, we engaged in criminal conduct. Yes, we knew what we were doing was wrong. Yes, we knew that, that because of what we’re doing, Americans were being killed. That’s how serious this is. Now Morgan Stanley says, well God, I guess you know, since nobody was prosecuted, I guess we can get away with it. Unless you throw these cats in prison. Culture doesn’t change. HSBC takes place. We know they’re criminals. They, they committed criminal conduct. Morgan Stanley looks at that. They say, oh, well they had to do was pay $1.9 billion dollars and oh, by the way, they made $20 billion dollars, so why don’t we do the same thing?

Mike Papantonio:             It’s a really good investment if you think about it. Farron Cousins, thanks for joining me. These stories every week get stranger and stranger.