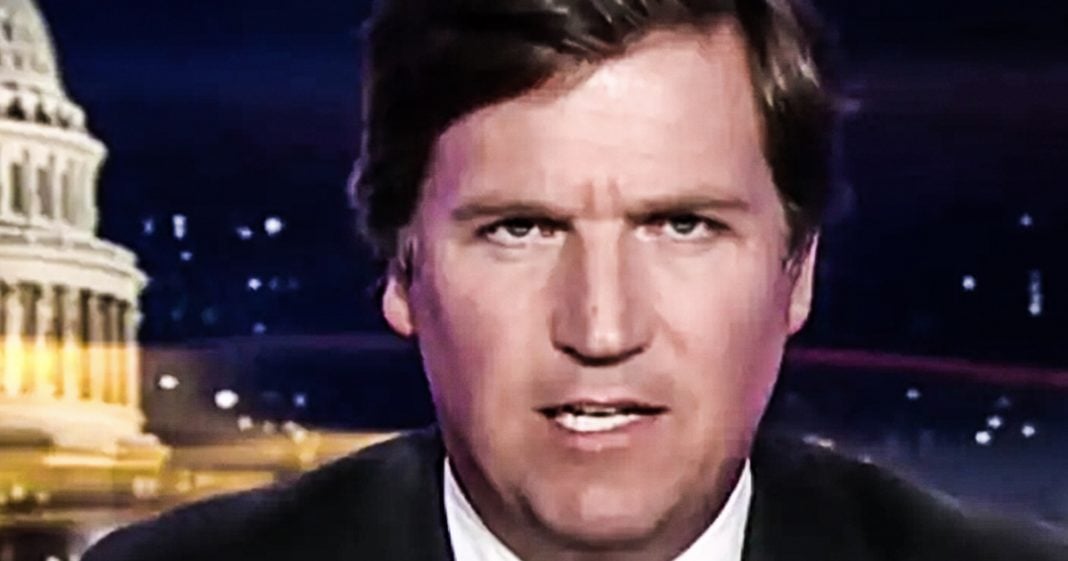 Tucker Carlson has already been hemorrhaging advertisers after his anti-immigrant comments last month, but now his misogynistic comments are starting to make the remaining advertisers flee his program. His show is in a bad situation in terms of revenue, but as the second-highest rated host on the network, his job is pretty secure. Ring of Fire’s Farron Cousins discusses this.

In the months since Tucker Carlson told us that immigrants were coming over to the United States, making us poorer, dirtier, and more divided, he is now lost 24 advertisers, 24 major advertisers for his Fox News program because of the comments that he makes on the air and this week we found out that he lost another one that made the 24th and that one was another big one. Red lobster decided to dump his program, but not because of the immigrant comments, but because of his disgusting misogyny that he exhibits on the air. The decision by red lobster to pull their ads from his program came shortly after Tucker Carlson said the following on the air and many areas of the US women suddenly made more than men. Now, before you applaud that as a victory for feminism, consider some of the effects. Study after study have shown that when men make less than women, women generally don’t want to marry them.

Maybe they should want to marry them, but they don’t over big populations. This causes a drop in marriage, a spike in, out of wedlock births, and all the familiar disasters that inevitably follow. So Tucker Carlson is out there warning us that hell of women start making too much money. We’re not going to be able to get married. Uh, we’re going to have all these bastard children running around this country that don’t even know who their father is. It’s going to be chaos and anarchy because women are making more money than men. So please, for the sake of the children, for the sake of the sanctity of marriage, for the love of God, cut women’s pay that. That’s the message he was sending with that statement. It’s absolutely insane, which perfectly describes Tucker Carlson as well. But here’s the thing, Tucker Carlson, when he’s not attacking immigrants in the last few weeks, has started to go on this kind of like men’s rights movement were men in this country are suddenly under attack, where masculinity is now viewed as a bad thing.

And we’re teaching our kids to be wimps. And, and you know, everybody needs to be a little afeminant. According to Tucker Carlson. This man is crazy and I hope to God that more advertisers drop him and here’s why. Tucker Carlson’s not going to lose his job. He’s not. We saw it happen with Sean Hannity not that long ago to when advertisers started leaving him. He’s still the highest rated host on the network and Tucker Carlson is number two. Tucker Carlson can lose all the advertisements that he has on his program. They can run PSAs or in-network promos during his ad breaks and he’s still going to have a job. They could lose money on his program and he still going to have a job. So this isn’t about censorship. This isn’t about pulling him off the air. It’s about making the network suffer by pressuring the market to do what is right.

There is nothing wrong with that. I don’t agree with the people saying that we shouldn’t be calling for advertiser boycotts because it could happen to us. Well, you know what, if we start saying stupid shit like that, if we start being overly offensive and saying horrible things, then hell yeah. Advertisers should drop us to. Luckily we don’t have to worry about that, right? We’re not horrible human beings like Tucker Carlson and Sean Hannity and the rest of the people at Fox News. That’s the difference and that’s why I don’t buy into the. Well, they’ll do it to us argument. If they go back and they see that progressives or Liberals or Democrats or whatever are saying some really horrible things, then yeah, there should be consequences for that, but that’s likely not going to happen. But what is happening is that Tucker Carlson is being exposed as the fraud and crazy person that he truly is, which is likely why the guy was never able to hold down a job at any network before finally settling on Fox News. So don’t forget, Carlson bumped around the other two, MSNBC and CNN long before he ever went to Fox. Back then, he wasn’t credit quite as crazy either and eventually his brain just screwed up enough for Fox News to be willing to accept him. And now if this advertiser exit is continues, they’re going to have to keep airing. Is Program while suffering major financial losses.