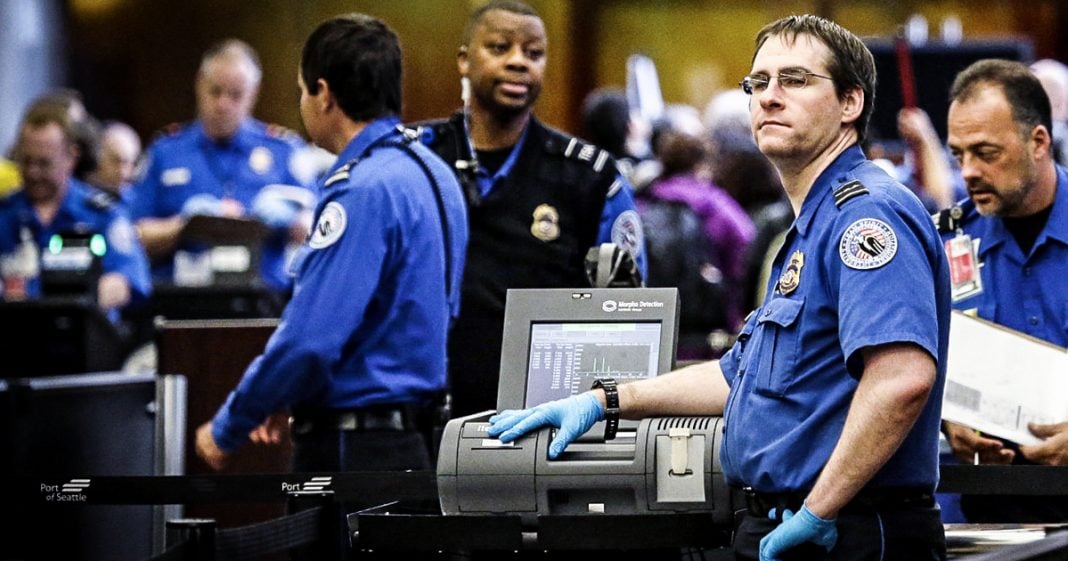 The government shutdown is putting a massive strain on the United States, as thousands of furloughed workers are lining up for unemployment benefits, putting a massive strain on an already strained system. On top of that, airport security is suffering as TSA workers continue their mass call-in protests, leaving our most vulnerable areas completely unguarded. Things are going to get much, much worse before this is all over, as Ring of Fire’s Farron Cousins explains.

Here’s an issue that I don’t believe is getting enough attention from the media in the United States today and that is the impact that this government shut down is having on the government workers who are either working without a paycheck or not working and still also not getting paid in the last couple of weeks alone, more than 4,000 furloughed government workers who are not receiving a paycheck have applied for unemployment. They have had to go to the unemployment offices trying to get temporary aid so that they can continue to pay their bills because they have no idea when this government shutdown is going to end. Thousands of new people just in the last two weeks applying for unemployment assistance because of the government shutdown. That puts an enormous strain on a system that is already strained because Republicans have tried to cut the funding and change the rules for it and now we’re going to strain it even more because of Donald Trump’s temper tantrum and that’s just the beginning.

Another very serious problem we have as a result of this government shut down are the massive number of TSA agents here in the United States who continue to call in sick because there are among those who still have to work but aren’t going to be paid for it, so the call out rate for TSA agents across this country is increasing every day, which means we’re basically having to pull in the second string or we’re having to operate with fewer TSA agents, which number one obviously means the inspections are not as thorough as they should be and two passengers or having to wait longer times just to get through airport security because there’s not enough people staffing them. This impacts the airlines. It impacts air travel in general. It hurts the overall economy. Everything is connected in this economy today and the president doesn’t seem to understand that and again gets worse from there.

We have food stamp funding that is likely to run out in the month of February. Now the Trump administration has told us they’re are absolutely going to find the money to continue funding that, but considering the fact that Republicans have made it their platform for the last several decades to say we need to cut food stamp funding, it’s incredibly unlikely that this administration is going to scrape up the change needed to get those people their food stamp checks. So once that happens, once again, we’re dealing with a situation where there’s less money flowing through local economies, even if it is coming from the ebt, the food stamp program, whatever it is, what’s even worse than economic pain is the physical pain that the people are going to go through because suddenly they can’t buy food there. Kids aren’t eating, they’re trying to scrape by and do whatever they can. And now they’re just in a situation where, Oh, well, Donald Trump’s angry.

Now when the government’s not open to send you your food stamps, a federal scientists are missing conferences. Um, national parks losing money and they’re piling up with garbage right now, I’m sure. But he’s seen the pictures floating around of just these massive piles of garbage in federal parks and national parks because there’s nobody there to even change the trash cans. Um, disaster aid. Then another one being delayed for areas of this country, Florida, the Carolinas, California, Colorado, places that had been ravaged by floods, hurricanes, fires, and all sorts of natural disasters. We’re not able to send the aide out to continue helping these communities so people aren’t able to put their lives back together again because of the government shutdown. The list goes on and on. Politico actually did a decent job of putting together a good list of all the different areas that are being affected by this and every single one of them is connected to something else in this economy, which is again connected to something else.

But more importantly than that, than the ripple effects of the economy, which could tank very quickly if the shutdown continues. It’s the human cost. The people not getting their food stamps, the people not getting the disaster aid, the people not getting their paychecks yet still being required to go to work, which means they also still have to pay childcare costs and they have no idea how they’re going to do that. People are suffering because of this. This is now the third longest government shut down we’ve ever had in this country, and if it goes on much longer, it’s going to go even higher than that. We can’t afford this as a country, both economically and morally. We have to take care of these people first and foremost, and that seems to be something that the Republican Party controlling the White House seems to have forgotten.