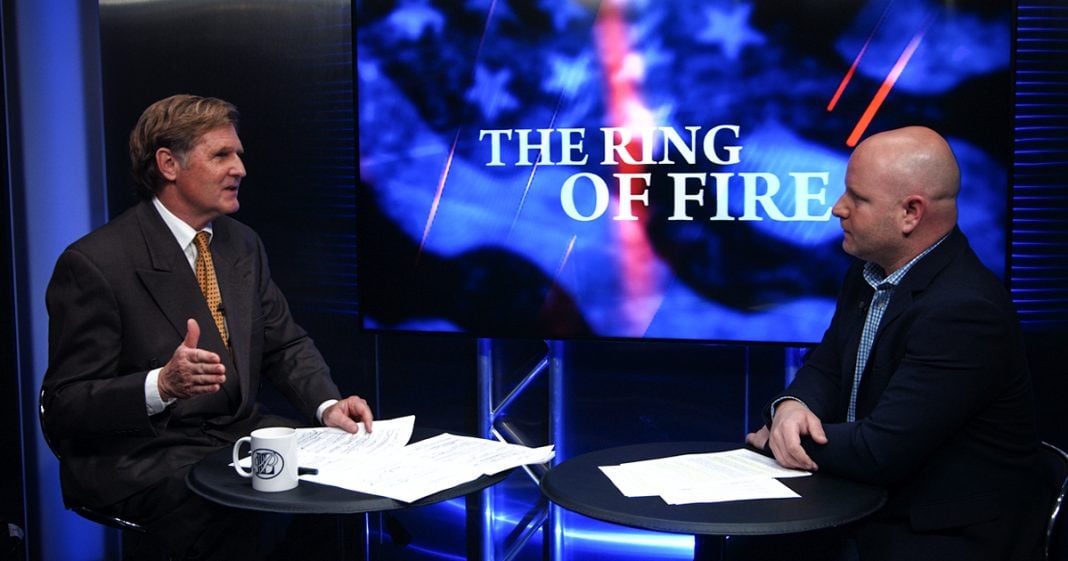 Recently, a commentator for NBC and MSNBC issued a scathing resignation letter, saying that he can no longer work for corporate media networks because of their insane pro-war slant. Ring of Fire’s Mike Papantonio and Farron Cousins discuss this issue.

Mike Papantonio:             Last week, a commentator for NBC and MSNBC issued a scathing resignation letter saying that he could no longer work for corporate media networks because of their insane pro war slant. Okay, here we go again. Isn’t this what we’ve been talking about for years? I mean, I remember when you were very young, right out of college, and this is something you’ve always wanted to talk about. You want to talk about what I remember the discussion.

Farron Cousins:                  They allowed the people to come out and say, well, he’s presidential now. Now he’s killing people overseas, and that’s what, that’s what makes a president in our book. Fifteen years prior to that is when they fired Phil Donahue. I mean that was MSNBC firing Phil Donahue because he was the only person in corporate media to speak out against Iraq. I mean that, that’s the origin basically of MSNBC at this point. That’s when that network really said, this is who we’re going to be. We’re going to be the DNC with a pro war face.

Mike Papantonio:             Okay, the progressives have now in, the DNC progressives, not the, not the general progressive. General progressive understands how the war machine is killing us physically, economically as far as our culture and they’re killing us. You remember just like I do, because we did the stories where you would have a MSNBC, you’d have all of these pundits. You remember the big, the big map on the floor, and they’d walk around the map and say, well, today our embedded journalists are going here.

Well, nobody said, nobody even asked the question, is all of this stuff about weapons of mass destruction, a lie? Nobody asked the question. Joe Scarborough, who you, you know you were here when Joe was my law partner. He goes to MSNBC and before I know it, Joe was, Joe is fairly reasonable about war. He gets to MSNBC, when I, when he was there, I couldn’t even talk to him. It was like talking to a Warhawk. Why? Because leadership wants that. Because leadership at MSNBC understand, never forget, it’s part of Microsoft.

Farron Cousins:                  Well Amazon’s right up there too. Amazon advertisements, they’re now advertising this cloud service, the AWS, I believe it’s called, which is what they’ve been selling to the military for years. You know, they’re the number one cloud source for the military.

Mike Papantonio:             Well talking about how important that is. A lot of times viewers don’t understand where this is really headed. Talk about it.

Farron Cousins:                  Right, most of Amazon’s money because for the longest time, up until just a couple of years ago, the actual Amazon website where you can order shoes or diapers or whatever it is, they were losing money on that. Where they made their money, where they were making the massive profits was through these secret government contracts. People didn’t know existed, through the Department of Defense because Amazon was providing all of their networking, all of their clouds, all their computers.

Mike Papantonio:             Let me now, I just attacked HuffPost. Let me come to the defense of Raw Story. This is, this speaks really well for Raw Story. Raw Story is a progressive site. I go to it just about every day. I say, well, okay, this is a story I’m doing, so let me see what they have to say. Raw Story took this, took this story about the resignation of this CNN, CNN. I mean, excuse me, MSNBC. You know about this NBC News Reporter. NBC News Reporter. Okay.

Mike Papantonio:             He did. He did both, you’re right. But at any rate, he’d been at it for about 18 years. He’s been involved. He is a military advisor. He’s a great journalist. If you’ve read his stuff, it’s brilliant. He’s always really good on analysis, but he got, this is kind of what, this is part of what he said. He said, I find it disturbing that we don’t report the failures of generals, the failures of national security leaders.

I find it shocking that we essentially condone continued American bombing in Middle East and now in Africa through our whole ho hum terrible reporting. And what is he saying? He goes on. Let me just tell you something, Raw Story. It’s worth going and looking at the story in Raw Story. Raw Story actually prints everything that he had to say.

Farron Cousins:                  Right. This massive resignation letter, they had it all there. And see, part of it too is he’s talking about the fact that these networks get so scared to criticize anything with the military because suddenly then you’re, you hate the troops, you hate the military, you hate America. That’s where it goes, but there is general critiques and criticisms that need to be discussed because yes, when we go over there overseas and we bombing civilians, were killing people who were just going about their daily lives. Children on a school bus.

We can criticize that and not hate the United States or hate the military or the troops or whatever, and this guy, that’s what he say is that we won’t call them out when they screw and that is a big part of the problem. We give them the platform, they come on our shows, they spew their propaganda and then they go on with their day and we don’t ever challenge it.

Mike Papantonio:             As you know, Ed Schultz was very good personal friend of mine. I used to do the Ed Schultz Show on MSNBC as just a contributor, you know, but anyway, one thing that I would always hear from Ed is that management, Phil, what’s his Phil Griffin, Andy lack. The management of the, of the organization was always pushing war.

They are pro war and part of the reason is is these so progressive corporate media types are promoting war and rather than these people doing their own analysis and thinking, is this a good idea? Is this really good idea? Should we really go to war because the Russians caused Hillary to lose the presidential election? Should we go to war with Russia because of that? People with a brain are asking those questions, but the media is pushing it like there’s no tomorrow.