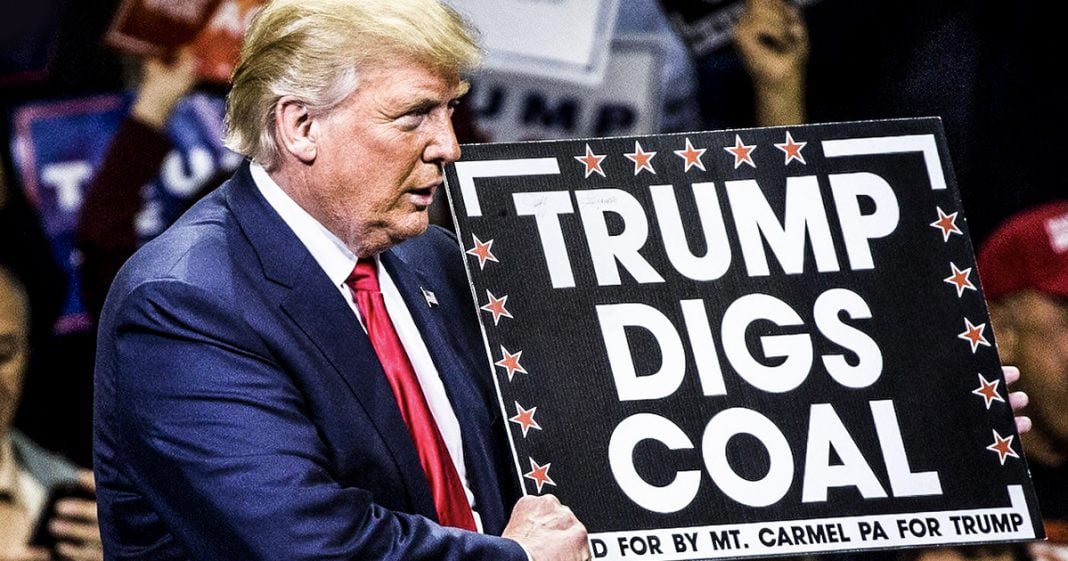 A new analysis shows that more coal mines and coal-fired power plants have closed during Trump’s first term than closed during Obama’s first term in office. Trump ran on a platform of protecting coal jobs, which was an obvious lie from the start as the President lacks any kind of power to stop progress. These plants needed to close, but we also have to do a better job getting the out-of-work miners and plant operators new jobs, as Ring of Fire’s Farron Cousins explains.

So as we approach the two year anniversary of Donald Trump being sworn in, which means the conclusion of his first two years in office. Let’s take a look at what has actually happened to one of Donald Trump’s biggest campaign promises. And No, I’m not talking about the wall. I’m talking about his promise to bring back coal here in the United States. That was one of the biggest things that Donald Trump personally campaigned on. I mean, we’ve seen the pictures of him holding the sides. Trump digs coal mines never dug anything in his life for the record. But he told these coal miners gathered at these rallies that he was going to bring their jobs back. He was going to save their industry. America was going to consume more cold than it ever had in the past. And so two years in and we have now seen more coal fired power plants shut down in Trump’s first two years than we ever saw in Obama’s first four years in office.

And yet Obama is the guy who republicans repeatedly told us was launching a war on coal. Will. It turns out the war on coal was coming from inside the Republican Party all along, although even that’s technically not true. Do you know where the real war on coal is coming from? It’s not coming from regulations or a lack of regulations. It’s coming from the free market itself. The free market has moved on from coal. These coal fire power plants that have shut down in Trump’s first two years needed to be shut down. More of them should have been shut down. All of them should have been shut down. We need to move beyond this fuel that this country has been burning for energy for hundreds of years. At this point. Go back and read the history of how long we’ve actually been using coal, whether it’s the heat, our homes or you know, run locomotives, whatever it is.

We’ve been using coal for far too long in this country. There are better options out there and that is exactly what the free market is telling us and that is why coal fired power plants are failing left and right. It wasn’t because of Obama and the regulations he put in place. It’s not even because of Donald Trump and the regulations that he has repealed. Those are going to hurt us as an American public, but they’re not helping the coal industry. Coal is dying because there’s better alternatives out there. Now, here’s the problem. Obviously when coal fired power plants closed down or coal mines closed down, people lose their jobs and that’s what we need to be concerned about. We need to get these people retrain, start a massive nationwide jobs training program and train them to work in the renewable energy field. You know, a lateral shift to a better job, a more sustainable job, a cleaner job, a job that’s not going to give them black long.

That’s what we should be doing for these coal miners. Not lying to them like Trump did, saying we’re going to save your coal job. What we needed to do, and this was actually the best proposal Hillary Clinton ever had, and I gave her credit for this at the time, she wanted to spend $30, billion dollars to move coal workers into the renewable energy field, retrain them to work in the renewable energy field, was going to spend a ton of money to do it. Get us off coal, get more renewable. These people keep their jobs, get better paying jobs. That is the kind of proposal that we need in place right now. It protects the workers. It protects the environment, but instead, Donald Trump would rather sit up there and lie to these workers who voted for him overwhelmingly and tell them that some magical force is going to come along and save their dying industry. The free market has spoken. Coal is a fuel of the past, and there is nothing that Donald Trump or any republican can do to bring it back.