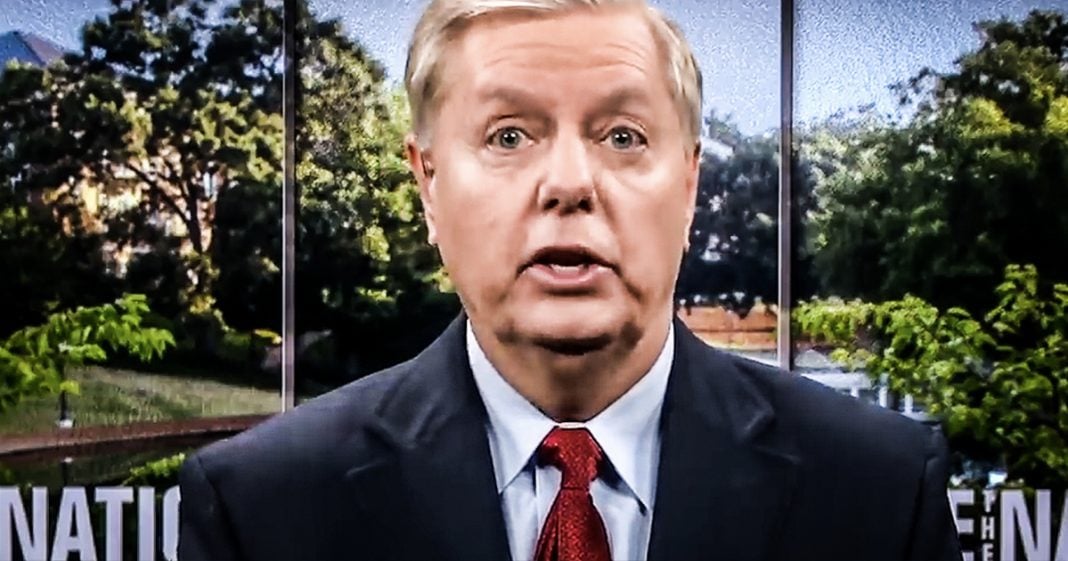 Republican Senator Lindsey Graham told CBS’s Face The Nation this past weekend that Republicans are just having a very hard time trying to find Democrats who aren’t “crazy” and who are willing to cave into the Republicans’ demand for $5 billion to fund Trump’s border wall. Graham had a white hot meltdown in the interview and gave us all the evidence we needed to figure out who the real party of crazies is. Ring of Fire’s Farron Cousins discusses this.

Republican senator Lindsey Graham has been having a hissy fit over the last few days about the fact that Democrats will not negotiate with Republicans and give them the money that they want for the border wall so that maybe eventually we can reopen the federal government on Sunday on CBS Face the Nation. Lindsey Graham ended up having a white hot melt down on the air that I am not going to subject you to, but if you want to check it out, there is a video in the description a, you’ll find the link down there. But nonetheless, let me tell you what Lindsey Graham said, and this was prior to the big meltdown that he had, um, it was the Democrats in the negotiations that they had over the weekend. And I guess building up to that point as well are just too damn crazy. They’re too crazy. Now he says he wants to negotiate with Democrats and he’s sure Republicans will negotiate with Democrats, but first they have to find a democrat who’s not crazy.

Those are the words that came out of Lindsey Graham’s mouth. We’re going to find a democrat who’s not crazy. Now Lindsey, I know you love the idea of a border wall. Hell, I think actually during the Republican debates, before the primaries even began in 2016, um, I think you might’ve been the one to actually introduced the idea of a wall before Donald Trump did. This is something you’ve actually built part of your career on long before Trump’s political ambitions even existed. So I know this issue is near and dear to you. Unfortunately it’s not near and dear to the majority of people in the United States. Republicans ran on the wall in the midterms and you guys got crushed. Look at polling data right now. Majority of people in this country would rather see that $5,000,000,000 spent on quite literally anything other than a wall. Majority of people in polls also say they just flat out don’t want the wall.

The government’s own agencies have released statistics that actually show us that a wall would be completely ineffective to do all the things that Donald Trump is trying to tell us. The wall would in fact do. It is unnecessary. It is useless. It is a waste of money. And the majority of people in this country actually agree with the Democrats right now. The people are turning on you. So let me ask you this question, Lindsay, who’s the real crazy ones here? Is it the people who just one massive victories in the midterms and they’re upholding the will of the American public and trying to reopen the government? Or is it the crazy old white guy who’s screaming at people on CBS telling them that other people are in fact crazy? Lindsey, if you want to see, you need to go back into that dressing room at CBS and go look in that big mirror that they have sitting there waiting for you because that’s one of the craziest people you’re ever going to see.