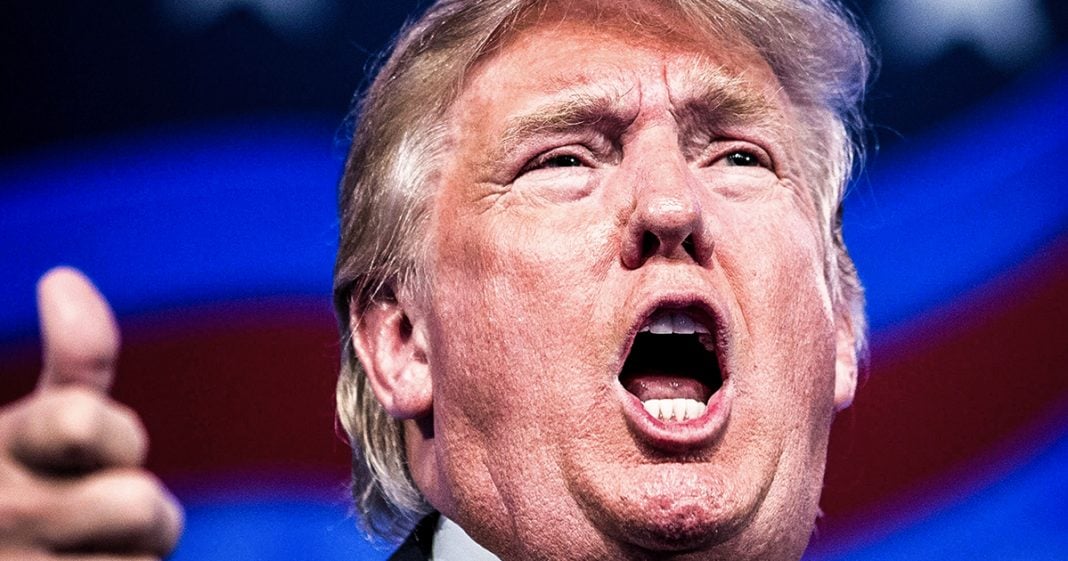 Donald Trump has never been a fan of following the rule of law, but his latest idea may be the one that finally pushes the most ardent of Trump supporters over the line. The President is mulling the possibility of declaring a national state of emergency along our southern border so that he can use eminent domain to seize private property that is needed to start construction of his border wall. Isn’t this the kind of thing that conservatives were saying Democrats wanted to do – Come and confiscate their personal property? Ring of Fire’s Farron Cousins discusses this.

So the federal government obviously still shut down right at this moment. Donald Trump has made it clear that he’s okay with this dragging on for weeks or months. We have about 400,000 federal workers out of the 800,000 who are not getting any pay whatsoever. They have been furloughed. They’re not going into work. The rest of them are going to work, but still not being paid for it. But there is a slim chance that some of them will receive some back pay. And I think that’s part of the problem a lot of people think is that, oh, all these furloughed workers, they’re going to get back pay. They’re going to get made up for all this time. Most of them do not. In fact, the vast majority of them do not get any money for this time whatsoever. Even if they’ve been working. A couple of weeks ago, right before the end of the year, Donald Trump signed an executive order that said that federal workers for the year 2019 will not be receiving their customary race.

Since it appears the Democrats are not going to cave in and give Donald Trump the $5,000,000,000 that he wants for his border wall or border metal slats or border fence, whatever it is we’re going to call it today, uh, Donald Trump has repeatedly been floating the idea of declaring a national emergency and then building the border fence without approval from Congress. Now, unfortunately, I know there is some disagreement among legal scholars about whether or not he can do this. At the end of the day, he can do this. When the president declares a national emergency, there is a set amount of money that he is allowed to pull from to basically do whatever the hell he wants to do with money is set up through the Department of Defense, comes from our military budget, which you know is overblown and bloated. So he’s got a lot of money sitting there that he can play with.

But if he’s able to successfully declared a national emergency, that would make the eminent domain process go faster, give him fewer hurdles to overcome. And he could easily start taking these people’s land over there in Texas and California. Um, isn’t this exactly what conservatives were terrified Obama was going to do? He was going to come and take your personal property away from you. And here we have a president who is openly expressed his desire to do that, and you’re just sitting back acting like, well, it’s okay. Is the president, he’s allowed to do it. Come please take my land and build your vanity border wall along it with money that’s supposed to be used to help people when things go sideways here in the United States, because that’s what that fund is. That’s where that national emergency money is supposed to be used for. You know, when we get a hurricane that comes in, destroys half a Florida when we have massive wildfires out in California or Colorado, when we have floods along the eastern coast, where does the disaster money come from?

Comes from that a national emergency fund. So if Trump takes that fund money and goes and spends it on a wall, what’s going to happen when the next natural disaster strikes? What’s going to happen if we do find ourselves in a real national security emergency, but oops, he spent the money on his wall. This doesn’t end well for anybody. This man is pissing all over the constitution on a daily basis. He is literally doing all the things Republicans warned us for years that Obama was going to do to us, and yet they’re completely silent about him. They knew it was alive back then, and they refuse to accept it as a reality today.