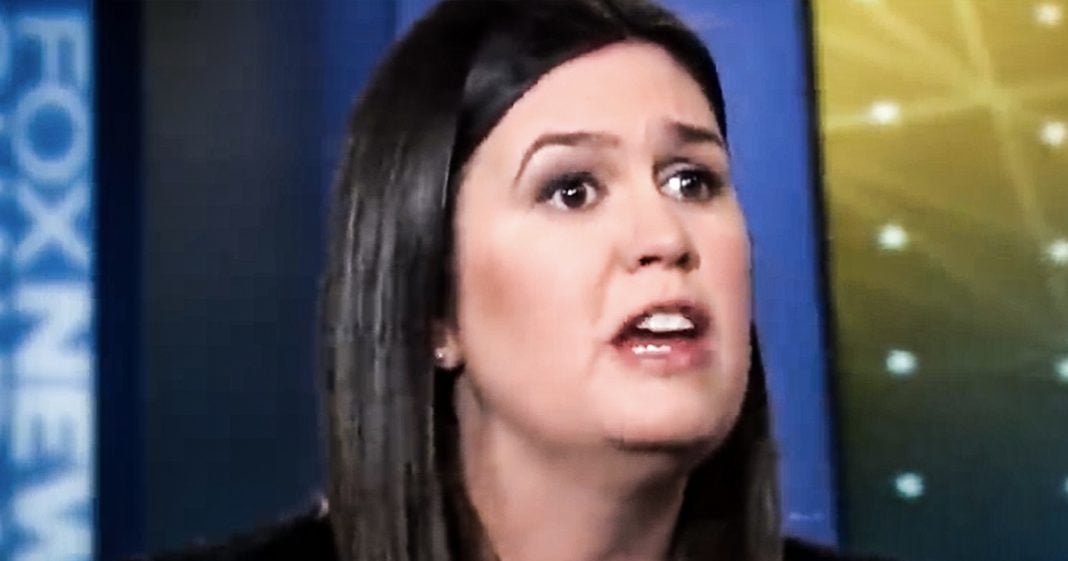 Fox News host Chris Wallace has been a fairly loyal Trump apologist, but this past weekend he just couldn’t do it anymore, and he called out Sarah Huckabee Sanders to her face for lying to his audience on the air. Huckabee Sanders seemed flustered, but that didn’t stop her from repeating her lies about our Southern border time after time during the interview. Ring of Fire’s Farron Cousins discusses this.

Sarah Huckabee Sanders at this point, is used to being called a liar. In fact, she’s actually done plenty of interviews over the last year or so where sometimes the host will call her out for the lies that she tells, but it doesn’t typically happen on Fox News. I mean, that is a friendly audience. They’re a captive audience for this administration, so it was exceptionally surprising this past weekend when Sarah Huckabee Sanders went on Fox News talking with host Chris Wallace were Wallace wasn’t going to let her get away with telling a very obvious lie. Take a look.

Special interest aliens are just people who come from countries that have ever produced a terrorists are not terrorists themselves, and the State Department says that there is their words, no credible evidence of any terrorists coming across the border from Mexico.

We know that roughly nearly 4,000 known or suspected terrorists come into our country illegally, and we know that our most vulnerable point of entry.

I know that statistic, I didn’t know if you’re going to use it, but I studied up on this. Do you know where those 4,000 people come or where they’re captured airports?

Not always. Certainly on…

The State Department says there hasn’t been any terrorist. They found something across the border.

It’s by air, it’s by land and it’s by sea. It’s all of the above, but one thing that you’re forgetting is that the most vulnerable point of entry that we have into this country is our southern border and we have to protect it and the more…

But they’re not coming across the southern border, Sarah, they’re coming and they’re being stopped at airports.

There are a number of ways. There’s certainly, I’m not disagreeing with you that they’re coming through airports. I’m saying that they come by air, by land and by sea, and the more and more that our border becomes vulnerable and the less and less that we spend time and money protecting it, the more that we’re going to have an influx, not just of terrorists, but of human traffickers, drug and flow and people that are coming here to do American citizens harm.

Alright, so here’s the thing. Wallace is 100% correct. There is no evidence whatsoever to suggest that any of these people down at the southern border are on the terrorist watch list or that they’re wanted by our intelligence agencies or that they’re coming over to the United States to do a some kind of harm. The ones that have been apprehended, as Wallis pointed out, had been apprehended at airports. You know, we can’t exactly just build walls around every single thing here in the United States thinking that that is going to keep us safe. They’ve been apprehended because we’ve got some pretty decent airport security and that’s what happened. The wall would not have changed that. It wouldn’t have changed the entry of most of the illegal immigrants here in the United States as about 50 percent of them are just people who overstayed their visas. So I’m really shocked that Chris Wallace was actually willing to call Sarah Huckabee Sanders out for this.

As there’s too many people on Fox News that totally not only would have let her say this, but they would have piled on. They probably would have said, well actually I heard it was more like 6,000 trying to come through the southern border down there. I heard it was 20,000. Thank you Sarah for being such a good voice of reason and truth and honesty here in the United States. Chris Wallace wasn’t having it and that’s bad news for Sarah Huckabee Sanders, because when you can’t even get away with your lies on Fox News, then you know you are losing the biggest supporters that you have.