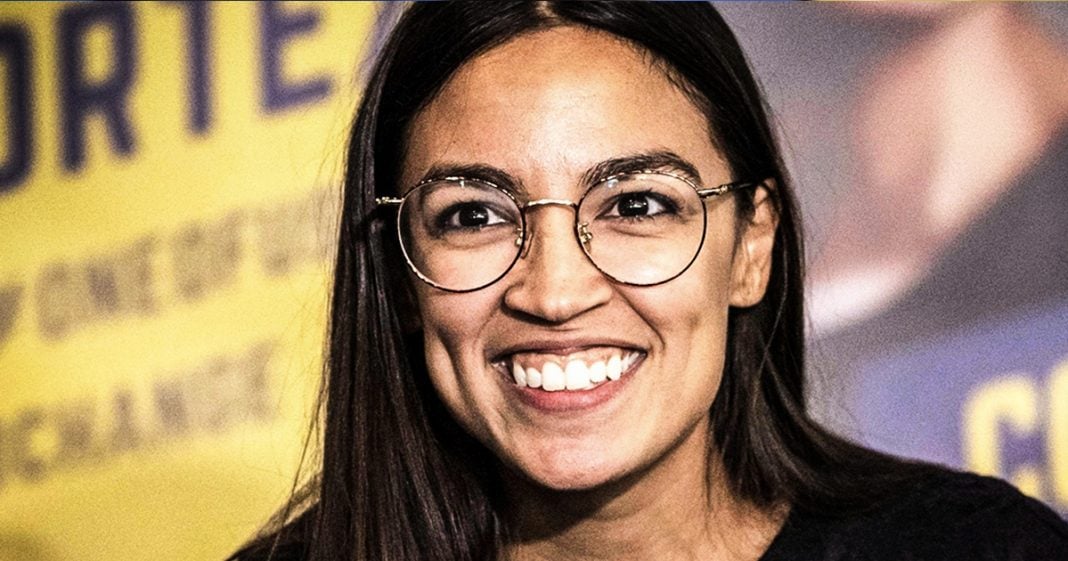 Conservative commentators in America are absolutely obsessed with Representative Alexandria Ocasio-Cortez to the point where their actions can only be described as creepy and predatory. The latest smear they are trying to launch is that she had a nickname in high school and college because she went by “Sandy” instead of “Alexandria.” All of their attempts to smear her have backfired so far, and Ring of Fire’s Farron Cousins explains why.

Conservative pundits, talking heads, media outlets, and all the rest of them on that side are driving themselves insane, trying to smear representative Alexandria Ocasio-Cortez. And to be honest, at this point, it’s just getting funny because every smear they come up with, against her backfires spectacularly. Last week it was the video of her dancing, uh, were hurt or friends were recreating the dance scene from The Breakfast Club. They tweeted that out, shared it all over the place, trying to say like, look, this is her, this is the woman. Okay. So she had fun once in college doing something completely harmless. We’re supposed to hate her for that. All it did was make people look at her and say, this is actually really cool and nice and wonderful, and we like her a little bit more now. So knowing that their first smear attempt has failed and, and all previous ones had as well actually, uh, and that was not their first.

The Gateway Pundit has come out with a new shocking story about Ocasio-Cortez. And this one might be the one that takes her down. And here it is. I’m going to read you the tweet that Jim Hoft to the Gateway Pundit tweeted out, and he believes this is going to be the end of Ocasio-Cortez. Here’s the tweet, exclusive Yourtown, elitist and Bronx Hoaxer, Alexandria Ocasio-Cortez went by Sandy, well into college at Boston U. that’s it. That’s the shocking story. She had a nickname that’s going to end her career. It’s going to take her down. There is no redemption from having a nickname in college. Um, he didn’t do a whole article on it. This Jim Hoft character, the gateway pond, it, and it’s absolutely just as stupid as you could imagine. We read you a few lines from this last week and anonymous classmate reached out to the gateway, pundit and sent us several photos of Alexandria Ocasio-Cortez from highschool, Ocasio-Cortez graduated in 2007 with honors.

Yorktown heights is a middle to upper middle class community located in northern Westchester County because that’s another attack. They’re trying to say that, hey, she wasn’t poor because her parents scraped enough money up to send her to a decent school where she pretty much was. One of the poorest people, they’re like, that’s verifiable. We know that. That’s true. They tried a few months ago to tweet out a picture of her childhood home saying that that somehow showed that she wasn’t a poor person, but if you look at the picture, yeah, that wasn’t an affluent persons. Home story continues and much like other Democrat hoaxers, Bobby O’Rourke and Indian, Liz Warren, Ocasio-Cortez went by Sandy, well into college at Boston University. In fact Ocasio-Cortez went by Sandy, at least into her junior year at the university. Sandy from Yorktown became Alexandria from the Bronx. It was all a big scam. It actually ends with that phrase.

It was all a big scam as if we’ve all somehow been hoodwinked because this woman went by sandy instead of Alexandria. Now I’ve had plenty of nicknames drought my life. I still have people who call me nicknames a thanks to one poorly executed speech. I had to deliver in college for quite a while. People called me fruit man. I did a speech about how to pick out the correct fruit. Didn’t go as planned, and so it got me that unfortunate nickname. Does that hinder my credibility? Does that make me a liar or a fraud in any way? Absolutely not. Just like calling Beto O’Rourke Beto doesn’t undermine his credibility anymore than Ted Cruz not going by Raphael. That’s what happens. It’s a nickname, but these smears from these conservatives are absolutely hitting ridiculous levels because they are so obsessed with this woman. They can’t get over it. And why is that? Because they view her as a threat if they didn’t think that she was a powerful woman who was capable of making the changes that she has promised to this country, they wouldn’t spend another second even thinking about her, but her and many of these other incoming Democrats, Rashida Tlaib. They threatened the conservative power structure and that is why they are quite literally grasping at straws here just to find something to smear these women with and so far, every single attack has backfired spectacularly.