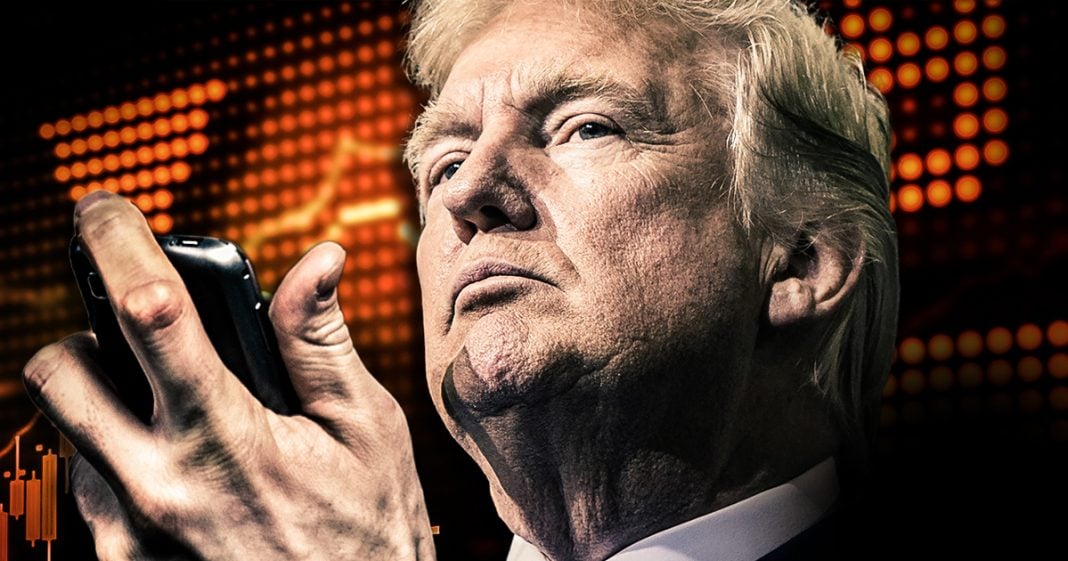 Economists are growing increasingly concerned about Donald Trump’s behavior, as it sends the stock market into complete disarray. This is not good for the US economy, even for those who have nothing invested in the stock market – we will all pay the price for a collapsing market. Ring of Fire’s Farron Cousins explains how the President could tweet the stock market into a full-blown crash and why we should all be uneasy about that prospect.

There is a very good chance that Donald Trump is going to tweet us into a massive stock market collapse, and the reason I say that is because that’s actually the warning that economists are currently giving us. Now. This is something I’ve actually brought up many times in the past and it’s that the stock market, in fact, the entire financial market here in the United States is incredibly fragile. Any and everything that the president says has an effect on that market, not just policies or executive orders that he signs or bills that he signed into laws. His words and his just temperament in general will affect the market. Now, I have spoken to friends of mine in the past who actually work in the market. Not Fun people to talk to you most of the time, but nonetheless, they have told me that they have to pay attention to what the president says. Every state of the union, every press conference, they have to listen carefully to those words and respond accordingly in the market.

That is telling you something that tells you so much about how fragile this market is, and we’ve seen the results recently, right? You know, Christmas Eve, huge stock market crash on that day, many crash, I guess you’d call it the biggest losses ever reported on a Christmas Eve in the history of the stock market. Then day after Christmas, boom, back up a thousand points day after that it opened 400, 500 points down, another dip and the reason why we’re seeing these wild swings and people getting out of the market, doing whatever they can to stock buybacks, which are the only things keeping the market afloat float right now. The reason we see that is because of what the president does a right before the big crash, Donald Trump is on Twitter criticizing the Federal Reserve that didn’t go over well rather than working with them as past presidents have. He’s working against them. And so in order to assert their independence, according to economists, uh, no, a Smith, they’re raising rates and that hurts the market. Past presidents have worked with him quietly, calmly, cooly, to get them to lower rates, to help them market Trump. Now he’s got to do his bully ways. He’s got a threatened them on social media and it doesn’t work out well for anyone and I’ve seen a lot of people tweeting out recent, like good stock market crash. Let the rich people take it on the chin. They deserve it. I agree, except for the fact that they’re not the only ones who suffer when the stock market crashes, and that is a sad reality of the United States. Most of us, myself included, have nothing in the market, nothing, not a thing, and yet a stock market crash will affect us eventually because what happens when rich people start losing money, they start tightening those purse strings a little bit more.

Whether it’s a CEO, you know, whether it’s just a wealthy retiree, they’re spending contracts, you know, suddenly corporations may have to look at, well, our stocks are down, our profits are down. As a result of that, you know our dividends, so why don’t we start cutting labor? Why don’t we start raising prices? Do something to bring the money back in for us and that’s when it starts affecting the rest of us. The rich are going to make up their losses somewhere else and those make up losses are coming from the rest of us, so don’t sit out there and think, good, rich people are losing money. Yeah, they’re the ones losing money right this second. They’re going to make it up and we’re going to be the ones paying the difference so that they get their profits back up. It will eventually affect us all.

It’ll affect the housing market. It’ll affect the auto market. It will affect everything. The job market, there’s nothing that won’t be touched by this. If the president continues tweeting us into a complete financial collapse and the problem is there is nobody in that White House, probably nobody on this planet who could convince the president to stop tweeting because it’s going to end up hurting all of us. He doesn’t care and he doesn’t even think it’s a reality. He thinks he can say whatever he wants without any kind of consequence, but at least in this point, as we all go down, we understand that, hey, at least Trump’s going down with us too, because even he is not immune from a massive stock market crash and it’ll be poetic justice if he is the one who causes it.