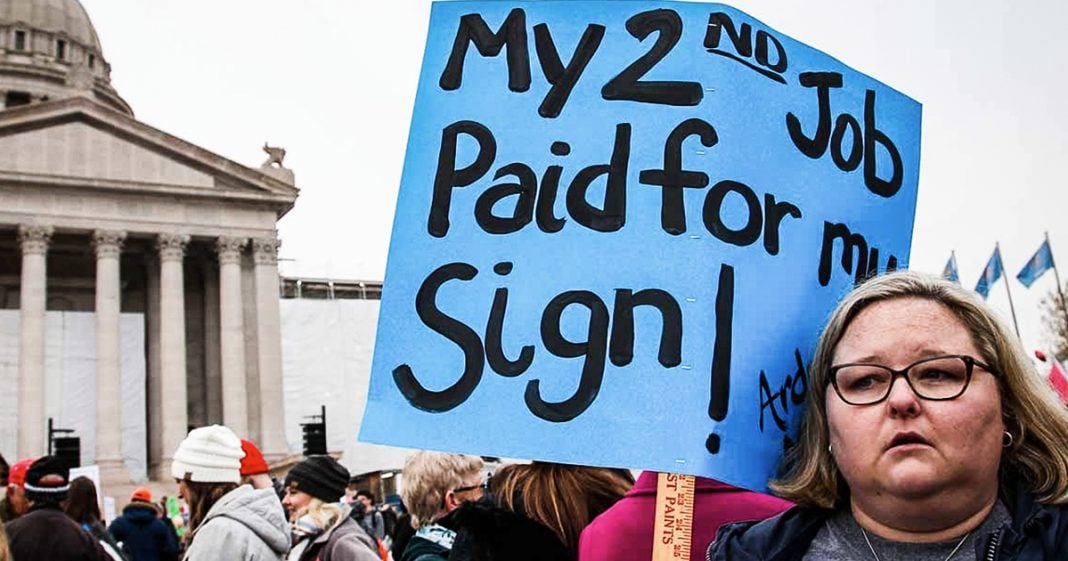 Due in part to factors like low wages, decreasing benefits, public ridicule, and unpaid hours, a record number of teachers quit their jobs in the past year, leaving a massive gap in our education system. The teachers are not the ones at fault here – our system has failed the teachers and the students. Ring of Fire’s Farron Cousins explains what this teacher exodus is about and why it is going to impact every one of us.

According to news statistics released by the Bureau of Labor and Statistics Teachers in the year 2018 public school teachers quit their jobs in record numbers. In fact, it is the highest rate of teacher departure that we have seen since the bureau began keeping statistics on public school. Teachers leaving their jobs. An average of 83 teachers for every 10,000 teachers quit their jobs and left the field in the year 2018 now. Yeah, that is absolutely lower than the rate of regular workers leaving their job per 10,000. But nonetheless, teachers already in the United States. We’re a rare commodity. We do not have enough teachers in the United States of America and we sure as hell don’t have enough quality teachers in the United States of America. But because of things like low pay, a disrespect from the entire general public, which is on full display. If you ever look at right wing twitter and you know, battling with budgets and school districts, school districts being starved of money.

Teachers not being given the resources to succeed for their students and then having the parents blame the teacher because your kid’s not doing as well as you think they should. All of those factors combined along with others have forced teachers out of this profession. Here’s a few facts from somebody who lives with a full time public school teacher, because I am married to her. My sister was a full time public school teacher who left the profession because she could not make a living there. Many members of my family are actually public school teachers. Um, but here’s the thing. You think a teacher only works like six hours a day. They’re only having to work when those kids are in the classroom. If you think that that is what happens, you are absolutely delusional. My wife, who is currently on their Christmas break from school, their winter break, whatever you want to call it, has worked every day. Lesson planning, grading papers, creating tests, doing something for her students. Most teachers are like that as well. They don’t get these days off. They don’t only work when the kids are in the classroom. Teachers average between 60 and 80 hours per week, yet they only get paid for 40 of them.

My wife’s not getting paid for any of this stuff that she’s doing over the break. Neither are the hundreds of thousands of other teachers in the United States. They’re all doing work and none of them are getting paid for it. Couple that with the fact that we’re starving teachers of supply so that the average school teacher spends over $1,200 out of their own pocket every year to buy stuff for their classroom. Add that to the fact that that Republican tax cut package last year, it actually did a way with teachers being able to write off those out of pocket expenses for their classroom, so every which way you look. Public school teachers in the United States are getting screwed. They getting beat up on. They get bullied online. People are lying about how hard they actually work and they’re sick of it and honestly you can’t blame them, but we’re the ones who are going to suffer. Everybody in this country suffers when we don’t have enough teachers. We’re not going to have people teaching the next generation of leaders, the next generation of doctors, lawyers, teachers. Those kids need quality educations to be successful in life and if they don’t get it in those formative early years because of a lack of teachers that is going to screw up the future of the United States in ways that I don’t think most people even realize.