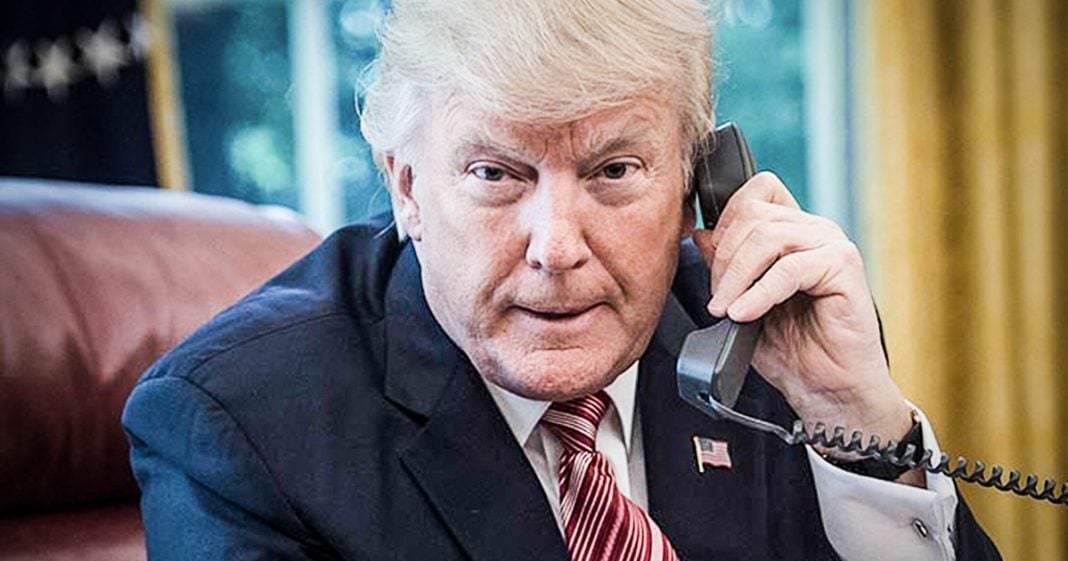 According to Donald Trump, he is being inundated with phone calls from supporters telling him that they support his border wall idea. Trump says the calls have been coming in over the last week. There’s just one problem with his claim – the White House switchboard has been shut down since the partial government shutdown began, so there’s literally no way people can call into the White House right now. Ring of Fire’s Farron Cousins discusses this.

Yesterday in the White House press briefing room, Donald Trump kind of gave a little impromptu, a rant to reporters in the room where he told them that he is never throughout his entire presidency, gotten as much support for the wall as he has in the last two weeks. Now, obviously he’s bringing this up because we are in day 14, I believe, of the federal government partial shutdown, which is 100 percent donald Trump’s doing because he wants $5,000,000,000 for his border wall or border slats. He doesn’t even know what it’s going to be anymore. But he was willing to do this partial government shutdown until he gets that $5 billion. So he was trying to convince the reporters in that room that the public is absolutely crazy about the idea for a wall. They love it and they’re all calling him at the White House to let him know that he’s also getting the tweets, just getting the emails.

Uh, somehow. But here’s the thing, he did specifically say that people have been calling the White House over the last two weeks to let them know how much they love the idea of the wall. Here’s the problem with that. It’s an absolute lie and we can easily verify that that is not happening because the White House switchboard was shut down as part of the partial government shutdown, and the reporters know that if you were to call the White House right now, even to express your love and admiration for Donald Trump’s fictitious wall, you would get a prerecorded message and that is it. You wouldn’t be able to talk to the president. You wouldn’t be able to tell them how much you love his wall idea and nobody would be there to relay that message even if you could. So Trump in that room full of reporters, once again, lied to their faces about getting all this support for his wall.

The truth is, yes, there are plenty of conservatives on twitter, including those little fly by nighters who’s 15 minutes of fame is almost up. People like Ben Shapiro, Tomi Lahren, Charlie Kirk, Candice Owens, they all support the wall. Yeah, absolutely. And again, their clock is reading about 14, 59 at this point, so they’re almost halfway out the door right now. You also have some other hard core Republicans who say, yes, we need the wall. You have the MAGA hat wearing supporters tweeting about how much we need the wall, but the majority of people in this country, the rational thinking once they do not support the idea of a border wall, in fact the latest polling shows that less than half of the country actually thinks the wall is a good idea and those numbers continue to drop as more and more people realize that Mexico is not going to pay for it.

So Donald Trump actually shutting down the government to get the funding for his border wall is making less people support the idea of a wall because now they realize Mexico’s not the one who’s going to pay for it. And I gotta say though, how gullible were you to begin with? If you ever thought Mexico was going to pay for this border wall, they made it expressly clear from the first time Donald Trump ever said that, that it wasn’t going to happen. Trump himself never believed it would, and now he’s out there telling us this nonsense that no, they’re paying for it through the savings that we’re going to get from this new trade deal that I have worked out that actually hasn’t even been passed by Congress, so it’s technically not even a thing at the moment. This man is a serial liar. There is nothing that he is even capable of telling the truth about and more and more people seem to be waking up to that. They seem to be understanding what’s happening with this man. Unfortunately at this point, not enough of them yet understand that he is incapable of telling them the truth. I think as this year goes on and as we plow further into the Trump administration a tenure, I think more and more people are going to understand that because it’s not just the big things that Donald Trump is ready to lie about. It’s quite literally at this point, every single thing he talks about, big, small, consequential, inconsequential. There is nothing that this man will not lie about.