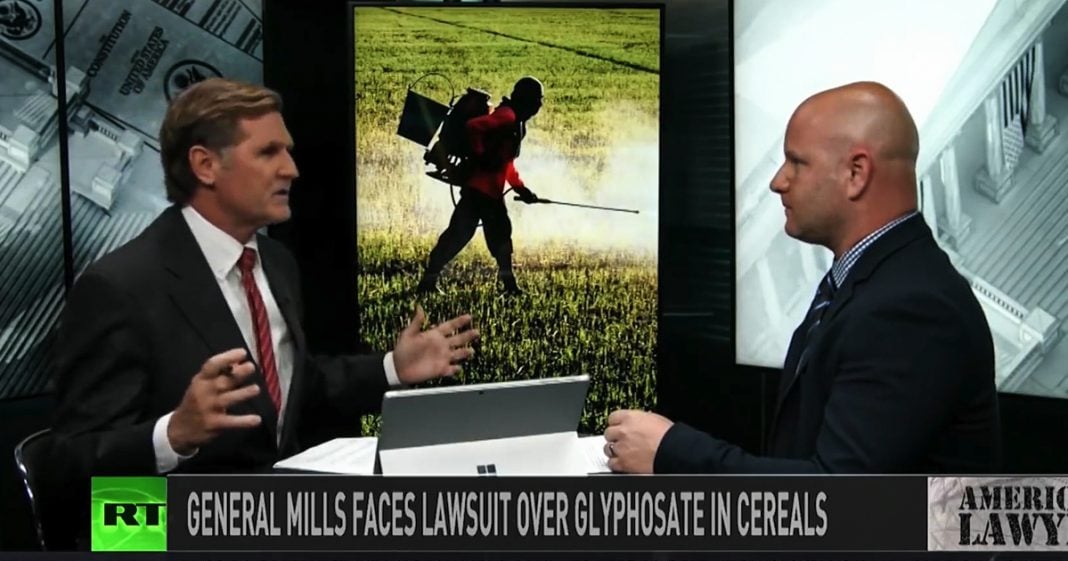 Via America’s Lawyer: Mike Papantonio and Trial Magazine Editor Farron Cousins discuss the latest in the ingredient in Roundup, Glyphosate that is widely used and harmful herbicide used on crops and other plants to kill weeds.

Mike Papantonio: For months, reports have been coming in from independent researchers showing that some of the most popular foods in America are tainted with Monsanto’s Roundup. Cheerios, baby formulas, beer and wine, you name it, if it’s made with any kind of wheat, grain or produce, it probably has roundup in it. That’s why consumers are now filing lawsuits against major food companies for putting this contaminated food on the market and I’m joined by Farron Cousins, executive editor of the Trial Lawyer Magazine to talk about these suits. Farron, my take on this one is that these companies, really, the food companies, General Mills, those types of people, they need to start out by suing the people responsible and that’s Monsanto and that’s now Bayer. I think it’s interesting. I mean, it’s gonna be a tough lift with the suit against the food companies. It’s an easy lift for the food companies to say to Monsanto and Bayer, “You’ve contaminated our food. We can’t even make a living selling this food anymore because of the poison you put in it.” What’s your take?

Farron Cousins: I agree 100% because in this suit, they’re suing General Mills because the cereal’s filled with glyphosate. Okay, well, you have to be able to prove that General Mills knew this, covered it up somehow and put this out, that they acted maliciously in any way. That is going to be nearly impossible for them to prove because I can guarantee you almost General Mills probably didn’t know about this. They’re not the ones who go out and test for glyphosate in their food. Now if they did, you got a big liability issue. But what they could do is General Mills needs to be suing Monsanto and Bayer. Kraft needs to be suing them. If Monsanto knew that these food products they were giving them, the oats, grains, the basic foundation of our foods, if they knew they were contaminated and sold to these food companies anyway, they’ve got another major liability.

Mike Papantonio: We’re gonna see … the damages are fairly easy to follow. I mean, you have people now that are cleaning their house out of things like Cheerios and some of this baby formula. I mean, they’re throwing this stuff away. So it’s impossible to believe that sales aren’t gonna be affected. They’re gonna be able to show date one, we were selling this much. Date two, the Monsanto lie was told to the … I mean, people finding out it’s a lie that glyphosate is extremely dangerous, not just for cancer. All we’re hearing about is cancer, cancer, cancer. If you look at these documents, it has a lot more to do with other disease. It has to do with birth defects. It has to do with neurological disease. It has to do with gastro diseases. So I mean, if I’m in the food production company and I have branded something like Cheerios. Now, just thing how broad that brand is. Now just because Monsanto has lied to everybody, including the makers of Cheerios, there’s a big hit that takes place.

I recommend, if they’re talking to me, I’m saying, look, the best defense in this situation is go after the people who are responsible. Go after Monsanto.