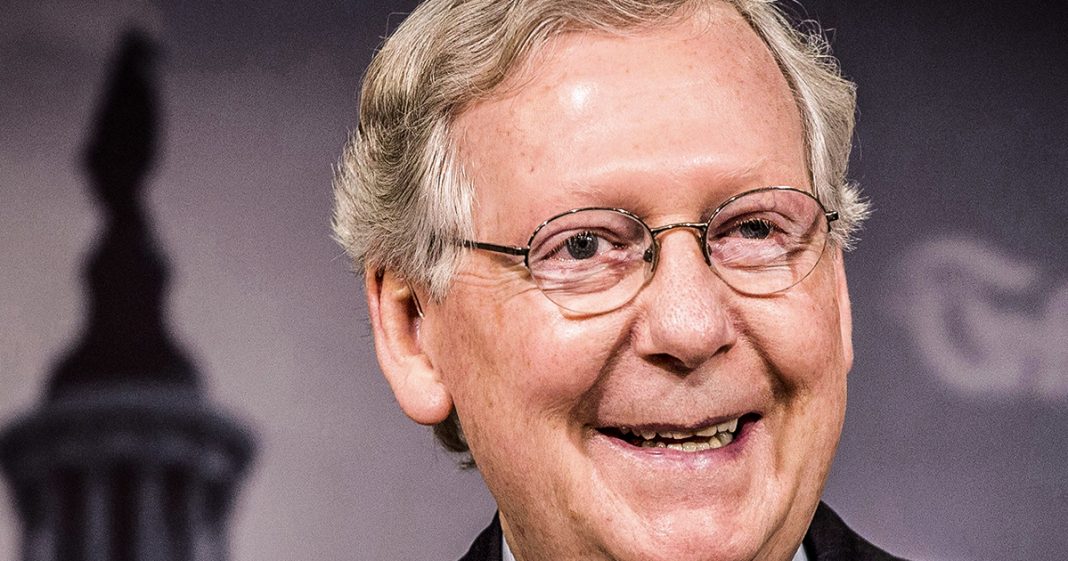 Republican Senate Majority Leader Mitch McConnell has said that his top, and possibly only, priority over the next two years will be to confirm as many of Trump’s judicial appointees as possible. And with a slightly stronger Republican majority in the Senate now, that possibility is likely going to become a reality very quickly. Democrats in the House are powerless to stop this, as our members of the public. We have to sit back and watch in horror as our judiciary is packed with unqualified corporate hacks. Ring of Fire’s Farron Cousins discusses this.

I know a lot of people are excited with Democrats, retaken the House of Representatives they’ve now been sworn in. We finally have some checks and balances in the federal government, and I hate to be the one to burst your bubble here, but with the Republicans gaining two additional seats in the Senate, there are still certain areas that are going to have long lasting effects on the future of the United States where Republicans completely call the shots and Democrats at this point are quite literally helpless to stop the damage that Republicans are doing and the number one area is the federal court system. See, after the midterms, Mitch McConnell in a very not publicly publicized interview, said that his top priority, after winning these additional seats in the Senate and getting a few more Republicans in there, his priority for the next two years is going to be appointing conservative judges or excuse me, confirming conservative judges to courts all over the United States.

And here’s why that’s so dangerous right now. Donald Trump in two years in office has gotten confirmed. 30 circuit judges, 53 district judges and two United States Supreme Court justices. 80 five judges lifetime appointments, most of them young enough to serve for several decades, effectively remaking the entire court system here in the United States with a pro corporate anti-consumer, anti-LGBTQ anti-women bias. That’s what’s happening in our courts. In fact, he’s appointed so many circuit courts that now one out of every six circuit court judges is a Donald Trump appointee, not just a Republican appointee, a Donald j Trump appointee. We have seen the damage that these conservative, unqualified judges can do to our democracy, how they benefit corporations, how they continuously screw over consumers. They screw over the labor movement. They take us tons of steps backwards on civil rights, issues, on voting issues, on everything, but that has always been the number one goal of the United States Republican party at least since the early 19 seventies.

And it’s a goal that Democrats have not ever been able to match and based on all of the available evidence over the last 50 years. They also don’t even seem to care that Republicans are remaking the lower court system in the United States where the majority of cases are decided they want to focus on. The Supreme Court were, yeah, most powerful court in the land, no doubt about it. That’s what they do. You can’t really overturn something from the Supreme Court unless you get a future supreme court to do it, and even then that’s very rare and very unlikely. Ninety percent of cases here in the United States, actually more than 90 percent are decided at the lower level, the circuit level, the district level, the ones that Trump and McConnell have been packing for the last two years with virtually nobody out there in corporate media talking about it in Mitch McConnell has said the words came out of his mouth that that is his priority for the next two years, and again, that’s bad news, right? There’s worse news. Democrats can’t stop it. Republicans control the Senate, the Senate, or the ones who confirmed the judges.

I hate to sound hopeless, but there is nothing democrats can do. On top of that, Trump has so far nominated six individuals who got a not qualified rating from the American Bar Association. Four of them have already been confirmed. One of them withdrew their nomination. One of them is still pending, but McConnell doesn’t care if they’re not qualified. McConnell doesn’t care if they’re openly biased. McConnell doesn’t care if they have a questionable history of sexual assault or if they’ve committed countless ethics violations while on the lower court. He just wants them on the courts and that is all that this man Mitch McConnell is going to be concerned about for the next two years, reshaping the federal judiciary so that it can screw over American consumers for generations.