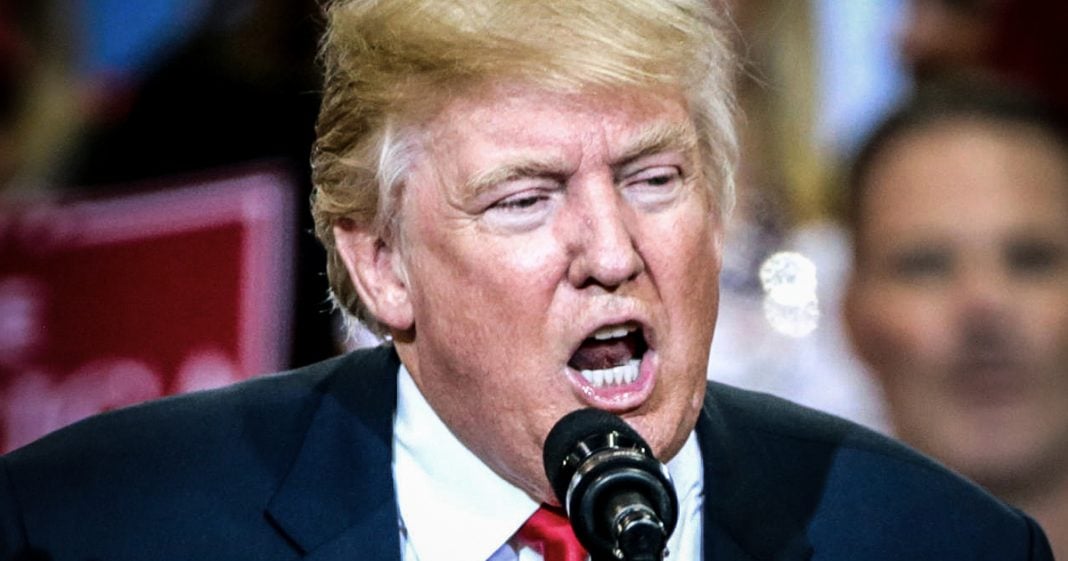 In a bizarre Twitter rant Friday morning, Donald Trump claimed that he can’t be impeached because he won one of the “greatest elections of all time.” Not only is this categorically false on every level, but it shows that the President is growing increasingly concerned about his chances of making it through his first term as President. Ring of Fire’s Farron Cousins discusses this issue and explains why Trump is so freaked out.

So there has been a lot of talk today, obviously about a Rashida Tlaib, a statement we’re going to impeach the motherfucker. That is what she said on Thursday, you know, kind of coming off this high, being sworn in, wanting to go after the Donald Trump chomping at the bit to get started at our new job in general. And she said this thing, the right is attacking her. The left is attacking her because that kind of crass language can’t stand. Oh my God, we can’t do that. Well guess what? I have no problem with what she said. I have no problem with her attitude, with her language, with her personality. I think hell yeah. Come into the office with a little bit of enthusiasm and willingness to actually do your job because believe it or not, holding the president accountable is part of the job of congress.

So she seems right on par with where she should be. Should she have used that language? Who Cares? Like if your problem is the language that she used, then you personally have bigger problems that you need to go deal with. If you can’t help hearing that hell, walk down the street these days, folks, you’re going to hear it. Any movie you watch, you’re going to hear it relax. It’s just a word. It’s just a word, a series of letters that make a certain sound, and if that offends you, then that’s your problem. Not Hers, but anyway, I bring that up because Donald Trump decided to get in on the action. He wasn’t happy about Democrats talking impeachment. Hell, we had a democratic representative, Brad Sherman. He’s already introduced articles of impeachment on day one, so Trump feels the heat. He understands impeachment could be right around the corner.

They seem very willing to do it on the democratic side. At least a few of them do. So Friday morning to get back to the main point here, Friday morning, Trump tweets out the following. How do you impeach a president who has one, perhaps the greatest election of all time done? Nothing wrong, no collusion with Russia. What’s the Dems that colluded? Had the most successful first two years of any president and is the most popular Republican in Party history. Ninety three percent. Literally everything that man just said, that tweet is ally, literally everything can be proven to be false that he said in that tweet, starting with the fact that he’s actually never hit a 93 percent approval rating according to Gallup among Republicans is highest, was 91 percent, which he hit right at the time of the midterms. Uh, two months ago. His approval rating right now, again, according to Gallup, is 89 percent among Republicans, and that is actually of this week as of this week.

Um, so the 93 percent, not true, accomplished more than any republican president in the first two years in history. Also not true. In fact, according to executive orders, he’s issue and laws that he signed. He’s actually done the least among any modern president, done the least. Those are verifiable things that this moron suddenly doesn’t, or it doesn’t seem to understand. We can look up, we can see that those are quantifiable. It’s not, you know, questionable. It’s not, well my opinion. No. You can look up and see what he is signed and compared what other presidents have signed quantifiable, ladies and gentlemen. But let’s get to the heart of the matter, right? Can Impeach me. I won an election now. Oh you didn’t. You technically did not. You won the electoral college vote. You’ll lost the popular vote by 3 million. So you’ve spent the last two years trying to tell us that $5 million illegal aliens voted in that election.

You set up a taskforce to find voter fraud. They couldn’t find a damn instance of it. And so here we are, and more importantly, you could have won the presidency by getting every single person in this country to vote for you. Your approval rating could be 100 percent and none of that would say that you couldn’t be impeached. Nothing that this man said in this tweet is related to the other thing. And nothing that he said was truthful. This is a very scared, terrified, and demented human being serving as the president of the United States right now. A lot of us, I think the latest poll show, at least half of us, those numbers might have gone up a little bit in the last week or two. Want to see this man removed from office, so yeah, Rashida Tlaib was 100 percent correct. With her enthusiasm, with her language and with her willingness to go forward with it. The only issue I have is that it’s not time yet. We will get what we need and yes, I know the argument can be made and has been made that there is enough right now to do it. That is true, but let’s wait till we have a foolproof case and then get this idiot removed from office.