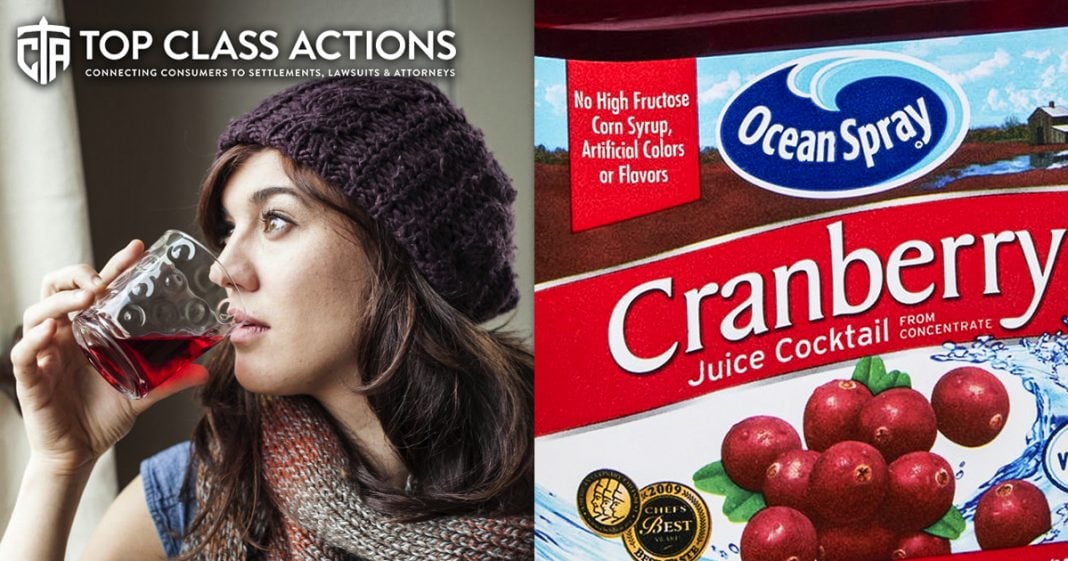 Some of the most popular brands of food and beverages in the United States have been marketing themselves as not containing “preservatives” or as using “all natural flavors”, effectively tricking consumers into believing that they are getting a healthier product. But the truth is that most of these claims are false, and consumers wind up paying more for a product that is exactly like the others they could have chosen. Ring of Fire’s Farron Cousins discusses this with Scott Hardy from Top Class Actions.

Find out more about the Ocean Spray class action at topclassactions.com

Farron Cousins: Some of the biggest food makers here in the United States understand that people want to be healthier. We’re a little more conscious about what we put in our bodies. We don’t want preservatives. We don’t want artificial flavors. We certainly, according to all the commercials today, we do not want high fructose corn syrup. So, they make it a point to tell us that they’re preservative free, artificial flavor free, high fructose corn syrup free. But are they?

According to investigations, usually not as much as they claim to be. I’ve got Scott Hardy from Top Class Actions with me now to tell us exactly what’s happening with some of these products. Scott, TopClassActions.com. You’ve had two great stories just in the last couple days here. One about Capri Sun, one about Ocean Spray. Both of these products are out there trying to say we’re better, we don’t have the preservatives, we don’t have the artificial flavorings in there. Not exactly what the investigations are finding with these products, is it?

So, to say that this Class Action has legs is an understatement. They’re going to have to change how they’re marketing these things because people are giving their kids Capri Sun drinks thinking that they’re a good drink for lunches, a good drink for after athletic activities and that kind of thing. But, they’re not knowing that citric acid is not … is actually a preservative and is not natural.

Farron Cousins: Right, and Capri Sun has been trying to say, well it’s for the flavor. We want that citric acid flavor, because yes, citric acid it’s found in a lot of citrus fruits. It’s used in the cheese making process in many instances here. But, according to the amount of citric acid in the Capri Suns, they found that there is no way this could be for flavoring. It is 100% being used as a preservative to prevent microbial life forms from forming in there. Bacteria, anything like that. This is meant to kill off the bad things, not to give the drink more flavor.

So, Capri Sun’s argument, you know, what you told us about the FDA saying no, this is a preservative, we have precedent. Then, based on the sampling amount in there, their argument falls apart immediately upon any kind of scrutiny here, doesn’t it?

Scott Hardy: Yeah. It sure does. Then, you have the other Class Action against Ocean Spray, which is saying that malic acid and fumaric acid aren’t artificial flavors, but the judge has already stated in that Class Action against Ocean Spray that while malic acid and fumaric acid might not have a specific flavor themselves if you were tasting them naturally or, by themselves. When you add them to an existing beverage, it changes the flavor of the beverage itself, and so, you can’t say that there are no artificial flavors when you’re adding something like malic acid, like fumaric acid within this Class Action, and it does change the flavor profile.

I’m actually really impressed by the judge for this law suit because you can tell this guy does his research. This woman or man does the research and, they’re going into the technical details of what these artificial flavors actually do, and how they change the flavor profile of a beverage. The science behind it is quite interesting.

Farron Cousins: You know, I know a lot of people may be looking at this and thinking, well isn’t this kind of frivolous here? I mean, okay, so these got these other little ingredients in there. Is that really cause for a Class Action lawsuit going through the courts? Well, the answer is yes, 100%.

And here’s why: studies have shown that people are willing to spend a little bit more money if they believe they’re buying a product that not only is superior but, that is all natural. So, you’re causing people to believe that they’re making a smarter choice. They’re spending more money on something that is almost the equivalent of the non, you know, the weaker food product, I guess it would be. The drink that doesn’t say no artificial flavors.

So, yes. You’re taking away the consumer’s right to make an informed decision. The only way that these companies will ever correct their behavior is to be held liable and have to return the money that they essentially, at this point, lied to consumers in order to obtain. That’s why suits like this are important isn’t it?

Scott Hardy: Yes, exactly, because these marketers, these companies are trying to upsell their beverage, they’re upselling their products, they’re saying things are all natural because they know that consumers will pay top dollar if they think they’re getting a little extra benefit. If they think what they’re ingesting is a little healthier, then they’re absolutely happy to pay an extra 50 cents or $1 per beverage to get something they believe is better for their body. When in fact, if they were informed and these companies actually labeled their products correctly, and legally as they should, consumers wouldn’t pay, or may not actually pay that extra health tax as it could be considered to buy these more expensive beverages, when they might not have any extra health benefit over the beverage that’s actually cheaper.

Farron Cousins: Absolutely. There’s more information about both of these cases in the description in the link to this video, links to the TopClassActions.com. Scott Hardy, I just want to say again, I enjoyed talking to you, and I love the work that you and the folks at Top Class Actions are doing all the time. I can’t say this enough. These are issues that every consumer needs to be aware of.

You know, we’ve got a lot of crazy news happening around the world, but at the end of the day we also have to understand that it’s not just the craziness in politics, it’s not foreign policy. We have some very real abuses happening here in the United States, and whether they’re large or small, they all come down to companies, corporations, whatever they are, trying to take advantage of consumers. At Top Class Actions, you all do a phenomenal job of telling these stories every single day.

So, thank you very much for joining us, and telling our audience these stories.

Scott Hardy: Thank you Farron. I appreciate your time.