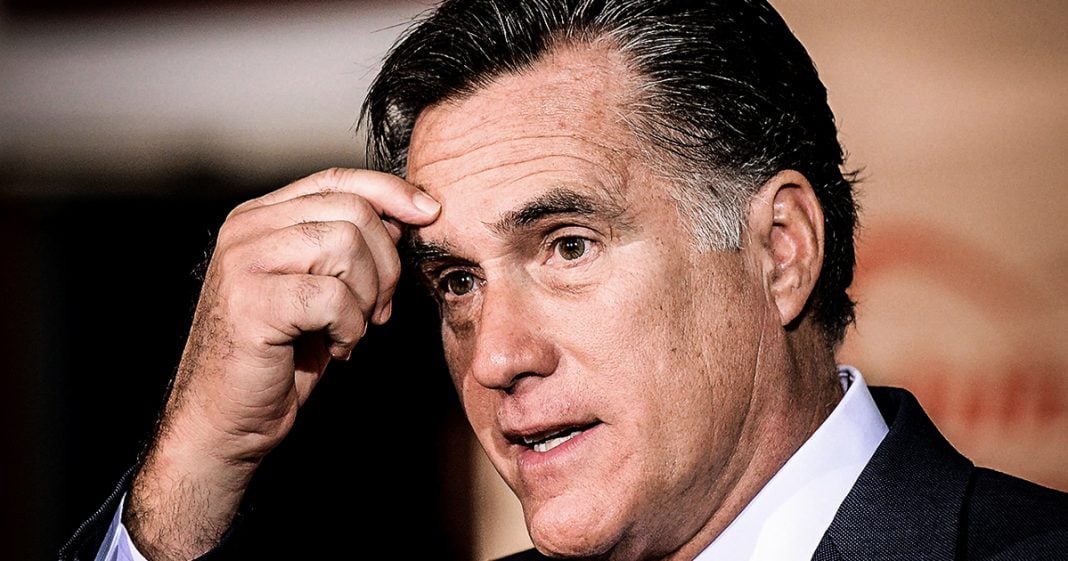 Mitt Romney is being assailed by the Right and hoisted upon the shoulders of the Left, but both sides need to chill the hell out right now. Romney is not a Resistance fighter, and he’s certainly not a traitor to Trump, either. He’s just another weak-willed Republican who will do everything Trump wants to do while saying the opposite to get some free air time. Ring of Fire’s Farron Cousins discusses this.

For the last several days after Mitt Romney pinned his exceptionally weak op-ed critiquing Donald Trump for not using manners, um, there’ve been too many on the left. And in fact, MSNBC is probably the biggest culprit here on the left, trying to make Mitt Romney a hero. I mean, hell, MSNBC had a graphic yesterday that referred to Mitt Romney is one of the new mavericks coming into the US Senate. Yeah. This 71 year old millionaire. A worth $250 million, I think. Uh, yeah. He has the new maverick. He’s going to be the savior of the left in the Senate because he didn’t like the way Donald Trump spoke to people. Mitt Romney is not a hero. Mitt Romney is not a turncoat. He’s not a trader to Republicans, which is what Fox News is trying to say. Everybody right now is trying to put some kind of label on Mitt Romney and it’s either hero of the resistance on Msnbc or a traitor to the Republicans over on Fox News.

The truth is that neither of those are true. Mitt Romney admitted so himself in the actual op-ed that I’m assuming at this point, nobody took the time to read. The man clearly said that he agrees with the policies of Donald Trump. He agrees with the deregulation. He agrees with the packing of conservative justices for lifetime appointments onto our courts, reshaping those for generations. He agrees with the tax cuts. He agrees with the hard line stance on immigration and MSNBC is dumb enough to sit there and put them on a graphic and say he’s the new maverick. Thank God I don’t watch that network because I’m pretty sure I would have a stroke anytime I turned it on. Luckily there’s people on twitter who posts these screenshots talking about how ridiculous it is and that’s how I find out what MSNBC is talking about. Same thing with Fox News, but this is insanity.

Ladies and gentlemen, Mitt Romney is not a hero to anyone. Mitt Romney is out there for Mitt Romney and he’s going to be just like jeff flake or John McCain. He’s going to talk a big game in public or in this case in writing. I doubt Romney would ever say these words out loud and then he’s going to go to the Senate and he’s going to do it. McCain and flake did, and he’s going to vote with him 87% or more of the time, just like every other republican out there. There’s going to be no difference in voting record. There is no difference in policy whatsoever. Romney, he admitted it. He just doesn’t like the way Trump says things and he was a little too harsh. Maybe use some manners, maybe some pleases and thank you’s thrown out there. That’s it. That was Romney’s critique, and if you’re dumb enough to think that that makes him some kind of hero of the anti Trump resistance, then you obviously don’t understand how devastating all of these policies that Romney is pushing our to this country because when it comes to policy, there is no difference between a Mitt Romney, John McCain, when he was still in the Senate.

Jeff Flake, Ted Cruz, Marco Rubio, Rand Paul or Donald Trump. Every one of them wants to do the exact same things. It’s just that some of them aren’t willing to go on twitter and insult another human being’s intelligence. Literally, the only difference between Trump and every other republican in Washington DC.