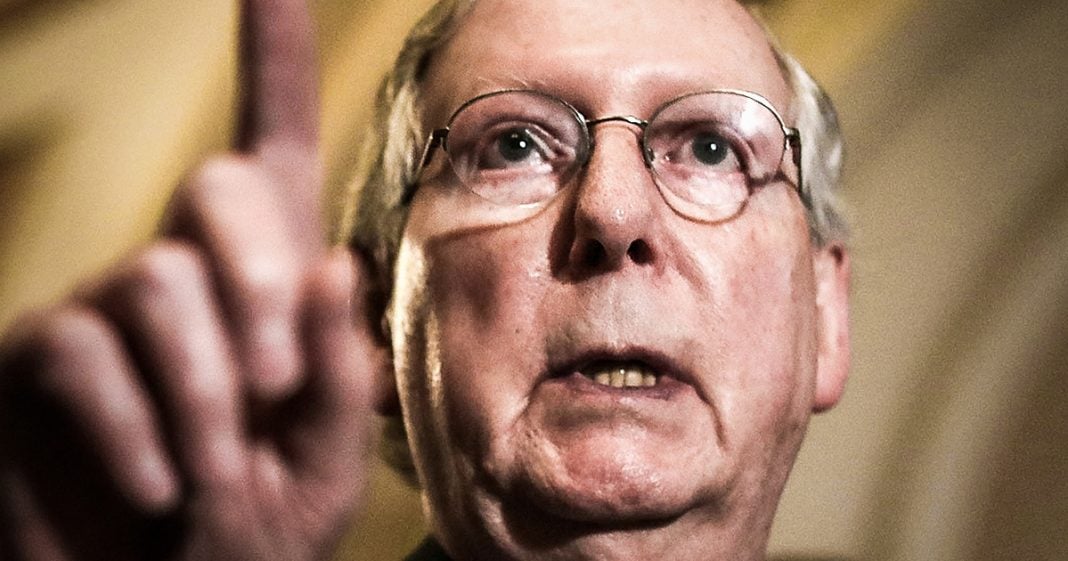 Republican Senate Majority Leader Mitch McConnell has made it clear that the federal government will not be reopening any time soon, and he has no intention of passing any legislation through his Chamber that does not include Donald Trump’s border wall funding. McConnell has had 2 years to pass a border wall funding bill but didn’t feel it was necessary until Democrats took over. Ring of Fire’s Farron Cousins discusses this.

As the new house Democrats gets sworn in today, one of their first orders of business is going to be to attempt to reopen the federal government after the partial shutdown that’s now been going on for more than 12 days. Uh, unfortunately for them though, Mitch McConnell made it clear yesterday that he will not allow any bill to pass his chamber in the Senate if it does not include the $5 billion dollars that Donald Trump is requesting for his border wall. Essentially Mitch McConnell’s out there telling us that it doesn’t matter what these bright eyed Democrats decide to do, we’re not going to pass it. We’re not even going to talk about it. Why they would waste their time passing legislation that they know we’re not going to pass is beyond me. Will you see Mitch? That’s exactly the point. The Democrats are not going to back down and they know that they can put forward a bill to reopen the federal government as many times as they want.

And if it doesn’t have that funding, you and your Republicans are going to vote it down there by owning the shutdown for however long it continues. Most people in this country do not want that border wall. Most people in this country would rather see that money spent on anything else that’s according to all of the recent polling data. So you go ahead and you keep throwing you a little temper tantrum about not getting your guy has $5,000,000,000, but just remember that the American public was against you before this even began in all you’re going to do is continue to piss them off. But here’s what’s really interesting to me, right? Republicans, you know, prior to today, had two straight years controlling both chambers of Congress two years that they easily could have passed a border wall funding piece of legislation, giving it to the precedent and made this whole thing happen.

They chose not to do that. See, they didn’t want it. They didn’t care about it. It wasn’t actually an issue, and it’s sure as hell wasn’t a priority for them because they know it’s not ever actually going to happen. Mitch McConnell is using this issue as a way to try to say, the Democrats aren’t playing nice, they’re not working with Republicans, they’re not doing their job, so let’s blame this all on them because darn it, we want that border wall funding that we easily could have passed for the last two years. Just didn’t get around to it. Is the American public really that stupid? I don’t think so, but clearly Mitch McConnell does and he is going to continue with this shutdown on the hopes that the American public is as dumb as he is. Good luck with that. Mitch. You own this now.