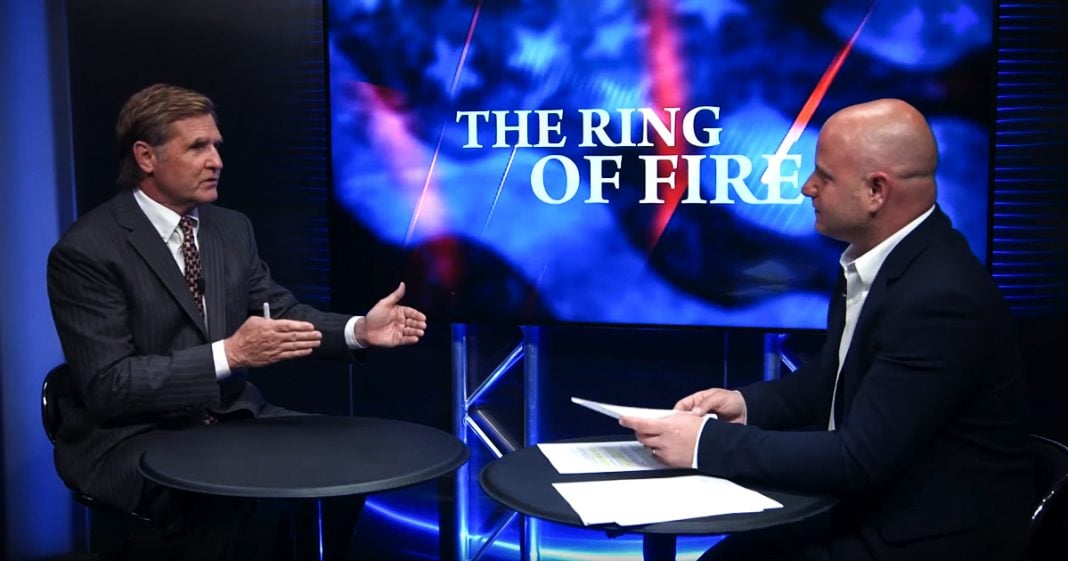 A man who spoke out about the dangers of fracking is now being sued by the fracking industry in order to keep him quiet. Ring of Fire’s Mike Papantonio and Farron Cousins discusses this issue.

Mike Papantonio:             A man who spoke out about the dangers of fracking is now being sued by the fracking industry in order to keep him quiet. They want to just shut him up don’t they? I mean, let’s, let’s shut this guy up. Before you get into the story, I want to mention something. They, have you followed this story where the NRDC, one of the biggest environmental groups in America, they do wonderful things coast to coast, not just in America, but around the globe.

Okay. The NRDC is now being made to file as a foreign agent. Now hear me out. This story is really incredible. You remember what they did to RT America six months ago. You have to file as a foreign agent. You know the reason that they gave? Because you’re reporting about fracking and the reporting that you’re doing about fracking is not telling the whole story and it’s hurting our American industry.

Mike Papantonio:             Propaganda or Hillary or anything like that. It was, okay, so now this story NRDC is also being hit by the same people. The same people who did the RT thing, now their going after the NRDC. You know what they’re telling NRDC? You have to register as a foreign agent for communist China because something you’re saying benefits communist China to the detriment of America. That’s how they’re using this foreign agent issue. Pick up with this story. I, this is the most incredible, so now we have them targeting individuals.

Farron Cousins:                  And this guy who’s being sued is Ray Kemble, he was featured in Gasland and Gasland 2 from Dimock, Pennsylvania. One of the worst areas hit with fracking. So bad that Cabot Oil and Gas, because that’s the company that’s been fracking over there. They ended up having a big settlement with all the residents there, and as part of that settlement, you have to sign on, you know that you’re not going to sue them, and what Cabot then did was they tried to argue in court as part of their lawsuit against Kemble for speaking out in the Gasland film, after he’d signed the settlement, was that well hold up.

You signed an agreement not to sue us, so that allows us to pollute you even more and you can never hold us accountable. You, you were not supposed to talk about it. This was a silence agreement. So we’re suing you, man, that we have been for years for $5 million dollars and so far this case has not been resolved. It is still pending in the courts.

Mike Papantonio:             Here’s the good news. The good news is the guy, you know he needs to protect himself. He needs to declare bankruptcy, but before he does it, he needs to say to them, okay, let’s mix it up a little bit. Let me take depositions of your people. This gives him the opportunity to really ask the questions he needs to ask that ordinarily you wouldn’t be able to ask and now you’re asking questions, you’re looking at their files, you’re looking at their memos and their emails, and all of a sudden you’re uncovering a bunch of material they don’t want out there. I got to close, but I got this, this segment that I love this segment.

Therefore they got theIr politicians to put pressure on, you know, for RT to have to register as a foreign agent. The same thing is now happening with the biggest environmental advocacy group in the world NRDC. They’re being attacked because they’re attacking frackers. Exactly the same language. it’s about climate change only what they’re saying about them, it’s not about Russia, it’s about communist China now. They have to register as an agent for communist China.

Mike Papantonio:             So you idiots. I can’t help but say it. Who write me and say, why are you doing? Why are you doing this propaganda show on America’s Lawyer? Really, that’s the propaganda I’m being accused of engaging is attacking the frackers. Doesn’t have anything to do with Hillary, doesn’t have anything to do with, you know, with internet being hacked. It has to do with politicians who were lined up behind the frackers, came after RT and made RT register as a foreign agent because in their words, these, correct me if I’m wrong, the exact words, because we talked about frackers and we talked, we supported the Occupy America.

Why are you on RT? it’s idiot talk. I’m on RT because we get to tell stories that are important stories.

Farron Cousins:                  Well, I have to add to that, because you mentioned the DNC. It was not just the democrats here. The republicans took it one step further. They added into the 2018 defense authorization bill that any provider carrying RT or Sputnik, those are the words either of those networks can now legally drop them regardless of your contract, regardless of what agreement you’ve made and never face any legal..

Mike Papantonio:             And I want to be clear about it. Was there any justification accept the discussion about fracking and Occupy Wall Street?

Farron Cousins:                  Well in the cases that we’ve talked about on AmerIca’s Lawyer. None of it has to do with politics. It’s all information that consumers need to be aware of.