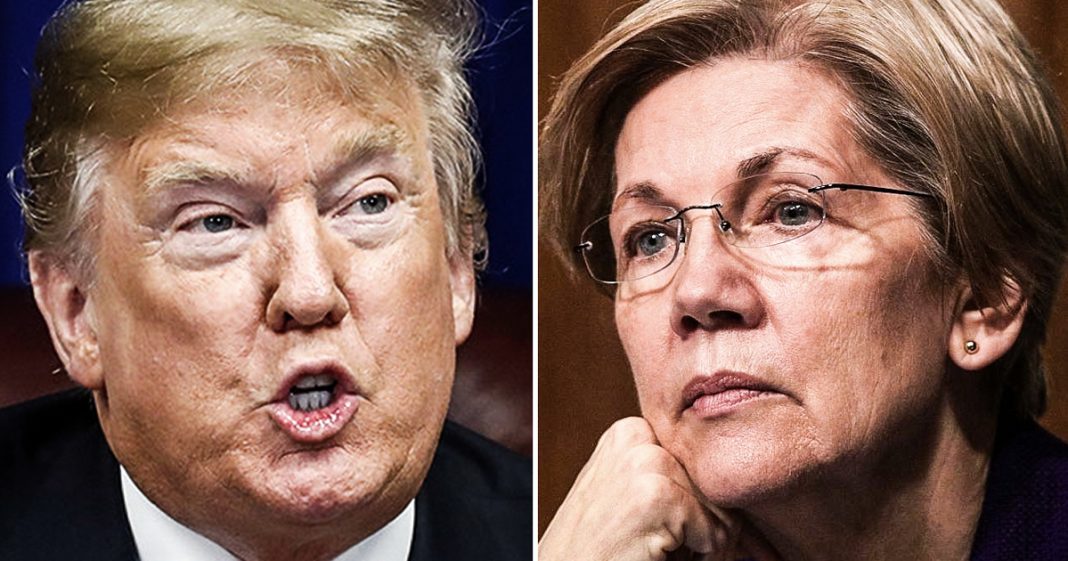 During a bizarre call-in interview with Fox News on New Year’s Eve, Donald Trump claimed that they would have to ask Elizabeth Warren’s psychiatrist if she believes that she can be president of the United States. We’ve seen Trump engage in tone-deaf, hypocritical attacks in the past, but this might be the one that takes the cake. Donald Trump has zero room to question anyone else’s mental state, as Ring of Fire’s Farron Cousins points out.

On New Year’s Eve, Donald Trump wasn’t celebrating with his wife and family. He was calling in to Fox News to question the mental capacity of Democratic senator. And now presidential nominee Elizabeth Warren, a rewind a day before that, Elizabeth Warren said, guess what, folks I am running for president of the United States, I have created the exploratory committee, uh, which is not necessarily an official running for president, but she is running for president of the United States under the democratic banner. So Trump, new year’s eve calls into Fox News because he has nothing better to do than sit around and watch cable news on New Year’s Eve instead of, you know, running the government. And he tells them this. They asked him what his thoughts are, and Elizabeth Warren running. And he says, well, I’m happy about it. I think she’ll be wonderful. I hope she maybe gets the nomination. That would be a wonderful thing for me. And the reason he says that is because he thinks Elizabeth Warren is very beatable in a head to head match up.

But then when the host asked him if Elizabeth Warren was really a contender for the job of president of the United States, and if she was up for it, Trump said this, you’d have to ask her psychiatrist. That was it. That was the end of that little exchange. They moved on immediately. But you’d have to ask her psychiatrist if she’s up for the job of being president of the United States. Now, the president over the last two years has engaged in many tone deaf attacks. You know, he is attacked people for having affairs. He is attack people for being horrible parents. He is attacked people for allegedly having low Iq is even though they don’t, but he clearly does. But this particular attack, um, there literally at this point been books written by psychiatrists telling the world, warning the world that you, Mr. Trump are mentally unstable and should be removed from office yesterday.

And you have the audacity and you’re completely immune to the irony of you sitting there saying that, well, I don’t know if she could do it. Why don’t you ask her psychiatrist Wacko. Really? Elizabeth Warren’s not the one who wakes up at midnight to rage tweet something she saw in a dream you do that you psycho. You’re the one who goes out there and acts like a four year old instead of the guy in his mid seventies, which is what you truly are. You’re the one who can’t handle even the most mild of criticisms from anyone in the world. You’re the WHO is antagonized world leaders who also have nuclear weapons and who are very hostile to the United States. You’re the one who needs to consult with a psychiatrist about whether or not your mentally up for the job of president of the United States, regardless of what anybody thinks of Elizabeth Warren as a candidate, regardless of what you think about her policies, there is no doubt in my mind that this woman has the mental wherewithal to serve as the president of the United States.

I would not worry about her mental capacity once if she were elected president. It’s not even something that would ever cross my mind, but with Donald Trump, that’s something we’ve had to think about every day. That’s something that the people who know best have been warning us about since day one, and here he is telling Fox News, you know, in in a bit of a coded language there that may be Elizabeth Warren is not stable enough to be the president of the United States. You want to see somebody who’s not stable enough to serve as the president. Somebody who’s mental functioning is not up to par. Then all you have to do, Mr. Trump is go and look in the mirror.