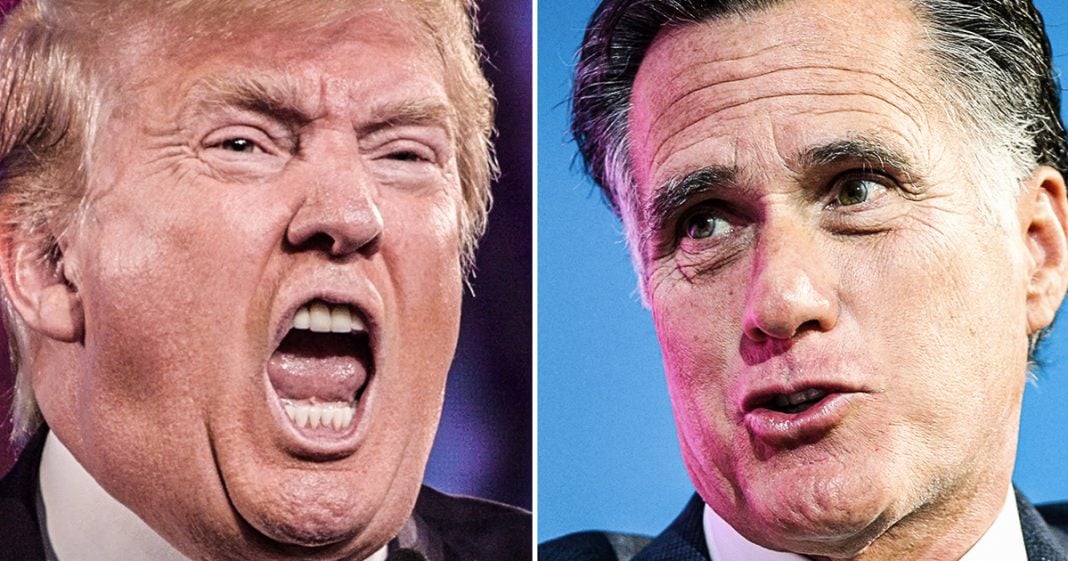 Mitt Romney penned an op-ed in the Washington Post over the weekend where he offered very mild criticism of Donald Trump for not having any morals. Romney’s critique, though weak, is entirely correct, but that didn’t stop the President from lashing out at Romney as a potentially new version of Jeff Flake. Ring of Fire’s Farron Cousins explains why both men are completely useless.

Recently, Mitt Romney pendant op-ed for the Washington Post where he provided what might be some of the most mild criticism ever have Donald Trump. Nonetheless, this extremely weak criticism of the president didn’t stop Donald Trump from getting angry on Wednesday morning and tweeting out the following. Here is what Trump said. Here we go with Mitt Romney. But so fast, a question will be, is he a flake? I hope not. I would much prefer that mit focus on border security and so many other things where he can be helpful. I won big and he didn’t. He should be happy for all Republicans be a team player. And when first and foremost, Mitt Romney has won all of his elections and actually lost the presidential election, uh, with still more votes, more percentage of the votes than Donald Trump has ever gotten in any election that he has ever been. And so you can’t say you won big and he didn’t when he is consistently gotten a larger portion of votes than you have.

But of course, facts don’t matter in your reality, uh, immune bubble that you live in. But that’s not even necessarily what this is about. Obviously Donald Trump doesn’t like anybody saying anything about him that’s not completely flattering. And Mitt Romney did that in the op Ed. Mitt Romney basically goes after Donald Trump saying I had thought, you know, after the campaign ended and he got sworn in as president, that he would become presidential. You know, I was hoping he wasn’t going to name call and he wasn’t going to be immature and he wasn’t going to be just downright awful. Buddy is. Did you really think that this man was going to change who he is as a human being just because he has a new title and a new office that that’s not how that works. Donald Trump is who Donald Trump has always been an everyone who looked at this critically knew that that was going to happen.

Mit and, and why after two years after he endorsed your campaign for Senate, after you sat and had that very awkward dinner with him a year or so ago, why now are you just suddenly saying, you know what, I don’t like the way this man is behaving. But again, that’s not even the point. The point is something Romney said within this op-ed, which echoes exactly what we have been saying here for years. Here it is. I’m going to read this to you word for word. It is not that all of the president’s policies have been misguided. He was right to align us corporate taxes with those of global competitors to strip out excessive regulations to crack down on China’s unfair trade practices to reform criminal justice and to conservative judges. These are policies mainstream Republicans have promoted for years. That paragraph by Mitt Romney, again, we have been saying that others have been saying it for years at this point.

The reason they don’t actually turn on Donald Trump is because he’s still doing everything they would be doing if they were president. We would not see a difference in policy today. If it was Mitt Romney sitting in the Oval Office, Ted Cruz, Marco Rubio, Rand Paul, it would all be identical. Maybe not as such a as much intense fearer over the wall or metal slats or whatever the hell Trump’s saying it is today, but the policies would be no different. The judicial nominees would be no different. We would still be living in the same kind of hell no matter which Republican were occupying the White House and Mitt Romney just adMitted that himself. The problem is not with Donald Trump’s policies. The problem is that they don’t like the wrapper around the policy and that is Donald Trump. Any one of them would be doing the same thing. They would just be doing it with a smile on their face and not calling someone else an infant title name. That is the only difference between Donald Trump and every other republican in Washington DC.