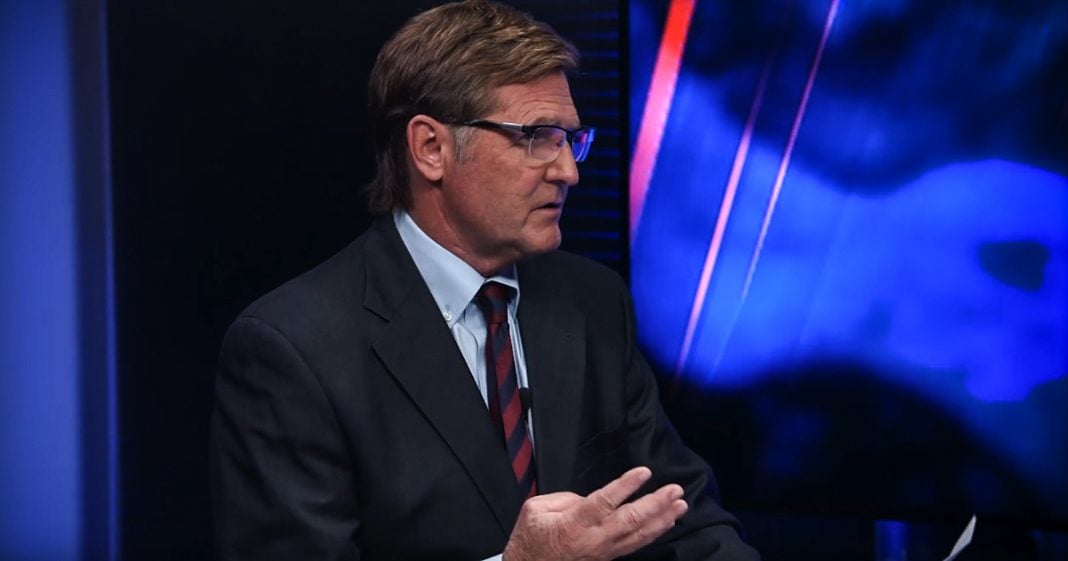 A school resource officer won’t be charged with a crime after it was revealed that he was filming students without their consent, including instances where the students were naked. Ring of Fire’s Mike Papantonio and Farron Cousins discusses this issue.

So my take on this case is when I saw it, it’s an important case, not just because of this particular instance, but it’s important because we run into these kinds of cases a lot in the US where you have prosecutors offices that believe that they somehow transcend constitutional rights. Now, this situation they’ve got, you’ve got a resource officer. He was also a coach, said he had, inside his house, he had cameras that were security cameras as well as outside of his house.

Somebody breaks in that if you have people in the house working, you can, you can film what they’re doing. This situation he had a camera that also shot into one of the restrooms. He gave an explanation for what it was for four years. This has been kicking around. They didn’t take, they never took it to a, to a grand jury, destroyed this guy’s reputation, completely, utterly destroyed his reputation. And now he’s, now they’re here saying, well, basically they’re going to have to drop charges.

Farron Cousins:                  Well, yeah, because as you mentioned, they failed to take it to a grand jury. They just kind of sat and sat and sat. I mean, this is prosecutor, prosecutorial misconduct at the very height of it, but, but there’s also the other side of it too, is a lot of questions that are now just going to remain unanswered because they let the statute of limitations expire.

You know, obviously you’re innocent until proven guilty. But why was this resource officer/track coach, why were these teenage boys in his home? Why were they staying with him? They were not his children. So that’s a question that I think would, would need to be answered. And you know, you’re not allowed to film a restroom.

At least a public one. I’m sure there’s obviously different statutes, tt’s your own home, but that does also kind of raise a couple issues about privacy. Did the kids know? But again, he was an officer. He said, I have these guns, you know, throughout my home and that’s why I have it there to make sure nobody gets into that. Seems like a plausible explanation.

Mike Papantonio:             Because here again, the prosecutors, you know, everybody wanted to jump on the bandwagon. Let’s charge him. Police officers, let’s charge him. Maybe he should have been charged, but when a prosecutor doesn’t do their job, the worst scenario is the guy did nothing wrong. Now his career is completely ruined. If he would have done something wrong and they certainly would have taken it to a grand jury, a grand jury could have looked at it and they could have said, let me just point this out, having been a prosecutor.

If you want a grand jury to prosecute your target, you’re going to get it every time. I mean, that’s just part of how it works. The prosecutor goes into the grand jury room, there’s really no, you know, there’s no question they can accomplish what they want to accomplish. So here you’ve got this situation, the man’s life, as you can imagine is in shambles. He’s been accused of filming people inside his house taking showers.

If you look at the story, it’s not even clear what they actually took from the house. Was there other filming going on as well? I don’t know. This is just, time and time again I see bad prosecutors doing bad things that result in bad things for people. And sometimes they’re right. But if you’re, if you feel like you’re right as a prosecutor, you need to go ahead and you need to buck up. You need to man up, take it to a grand jury. If you really think you have a case other than just doing what these boneheads did. I mean this is, this is really a travesty.

Farron Cousins:                  Well there certainly, based on this story, on what we know about it, there doesn’t appear to be anything malicious about what this resource officer did, but at the same time that they’re sitting around kicking this guy in limbo, we have police officers out there putting African American, unarmed suspects in choke holds. Giving them those rough rides. I mean killing them, basically just killing them, getting off, because as you point out, you go to a grand jury, you’re a good prosecutor, if you don’t want to prosecution, you can get that as easily as you can get a prosecution.

Mike Papantonio:             It’s both. It’s both ways. We’ve seen it with the, we’ve seen that with the, with these insanity cases where you have officers that just way way exceed what they should do. And if the prosecutor doesn’t want that person prosecuted, they just say the right things. They ask the right questions in a grand jury comes back.