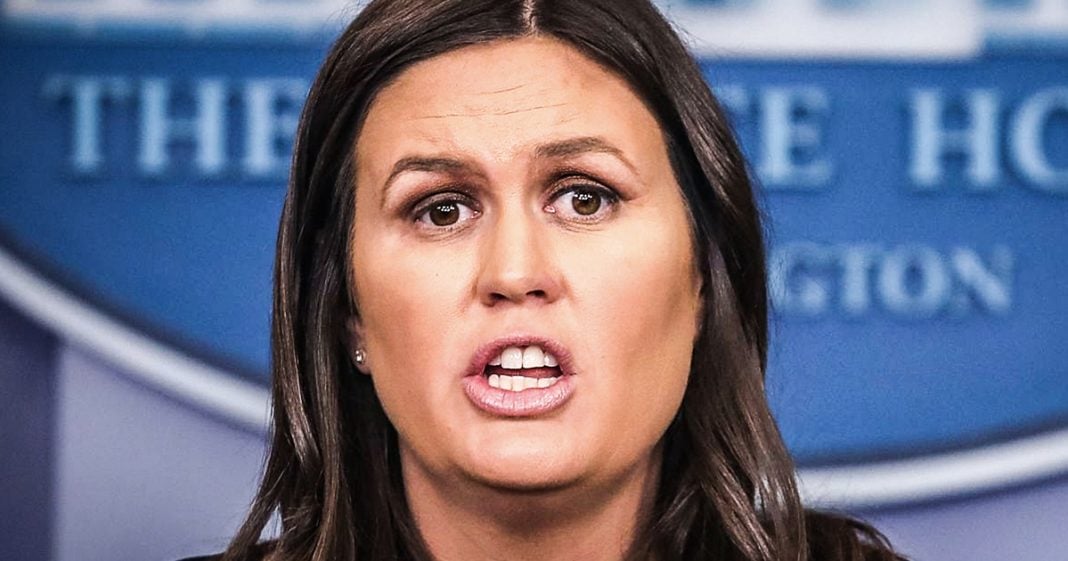 According to new reports, the reason that Sarah Huckabee Sanders hasn’t left the Trump administration yet is because she can’t find work anywhere else. And it isn’t just Huckabee Sanders – even deputy press secretary Raj Shah wants out but can’t find a job anywhere, creating a “Night of the Living Dead” scenario inside the White House press office. Ring of Fire’s Farron Cousins discusses this.

In June of last year, CBS News reported that Sarah Huckabee Sanders and deputy press secretary, Raj Shaw, within the White House communications department, they would both be gone by the end of the year by 2018. And these are actually report that Sarah Huckabee Sanders, herself, did not directly refute. She did not say that this story is untrue. But here’s the thing, folks, we’ve just ended 2018. We’re now into 2019 and Sarah Huckabee Sanders and Ros shaw both still have their jobs. So why is that? Did they suddenly decide that they like what they do? Well, that doesn’t seem like the case considering Shaw has removed his job title from his official twitter bio and Sarah Huckabee Sanders is down to like one press conference that lasts less than 15 minutes per month instead of doing them every single day. So yeah, not exactly like these people have fallen in love with their positions, but according to Yahoo News, the reason these two nincompoops are still in their jobs is because they actually can’t find work anywhere else.

And you know, this is something that I do wholeheartedly believe. I know we’ve said this all throughout. Sarah Huckabee Sanders, tenure as press secretary, she has no discernible skills that would prove valuable to any company, any organization, any think tank in the United States of America. She goes out there and lies, which he a lot of these think tanks. They send people out to the media. They lie. A lot of these cable news host, especially those on Fox, they lie all the time, so why is Sarah Huckabee Sanders and he different because she does it so belligerently so angrily and so obviously. See that’s the difference between Sarah Huckabee Sanders brand of lying and say the lies you hear on Fox News. Those of us who look at it objectively understand that the people on Fox News or lying just like we do with Sarah Huckabee Sanders, but even those who tend to support the president have also come out and said, wow, Sarah Huckabee.

Sanders is clearly not telling the truth here. They don’t do that to Fox News because they package their lives a little better. They’re a little more polished at it, little more seasoned. They know what they’re doing. They can lie to your face, but put a smile on their face and so you smile right back at them. I don’t know that Sarah Huckabee Sanders knows how to smile. I don’t know that her mouth even bins in that direction because she’s such an angry hate filled human being, and that’s why she’s not going to find a job anywhere in the media. She’s not happy enough when she lies. She’s openly spoken about how much she actually hates the press, so it’s not likely one of them is going to hire her knowing how much she actually hates them, so she stuck and she deserves to be stuck. Sarah Huckabee Sanders deserves to be stuck in this job that she clearly hates working around people whom she clearly hates and they clearly hate her back because she’s such a disgusting and vile human being. This is hell for her, and that is exactly what this horrible woman deserves right now.