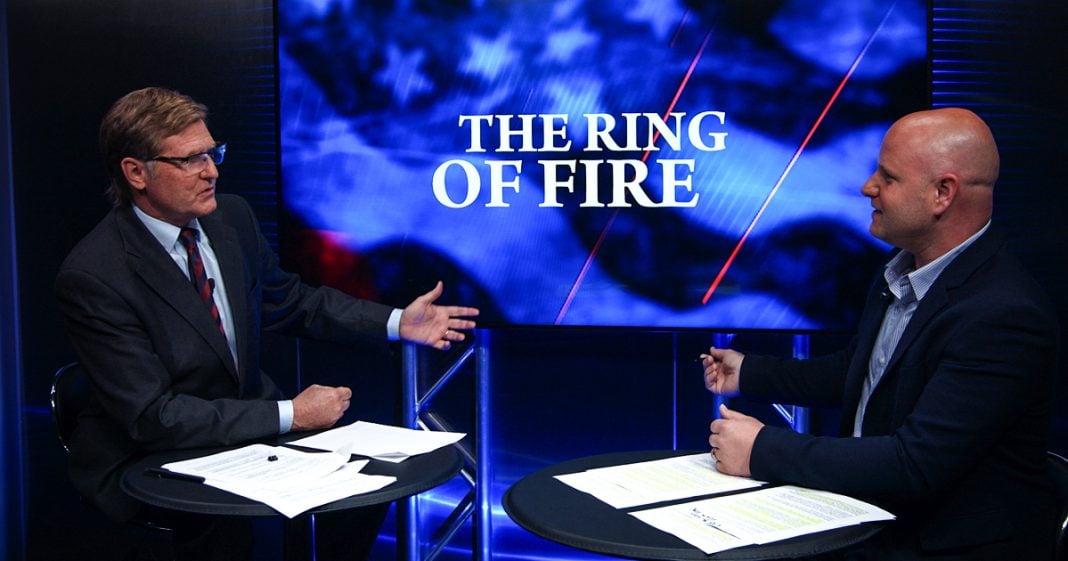 It’s a great step forward with the DNC, but there’s about a hundred other industries that they need to abandon. Ring of Fire’s Mike Papantonio and Farron Cousins discusses this issue.

Mike Papantonio:             Well the DNC has finally decided to stop taking money from fossil fuel companies. It’s a great step forward, but there’s about a hundred other industries that they need to abandon. You know, again, full disclosure, I’m not a Democrat, I’m not a Republican. I’ve been independent for 30 plus years. Okay. I just tried to call balls and strikes. If a candidate looks good on the Rs, I’ll go with that candidate. They look good on the Ds, I’ll go with the candidate. Nothing tribal about it. Hopefully it’s an, it’s analytical and we make right decisions if we analyze facts. So here the DNC is putting this out as if this is, as if this is revolutionary. We’re not, we’re not going to take money from the fossil fuel industry. Well, the other part of that story is they don’t get, they don’t get much money to begin with.

Mike Papantonio:             We’re going to frack everywhere. So they were trying to turn that around and even after he did that, the fossil fuel industry, they never really coughed up a lot of money. So what am I, am I looking at this through the wrong glasses, right now?

Farron Cousins:                  Well look, you know, when you read the headline. DNC votes unanimously to no longer accept money from fossil fuel companies that on its face you see that and you feel good. You’re like, you know what? That is the right thing to do. But when you even dig down into the story here reported by ThinkProgress, they mentioned, well, Democrats don’t get very much from these groups, Republicans get seven times more. So it’s basically you have a panhandler out there saying, I’m not going to take any handouts from other panhandlers. Well okay, but they’re not the ones who are running your campaigns.

It is the Wall Street types. It is Big Pharma. You know, before Citizens United in 2010, the two top donor groups for the Democratic Party were trial lawyers and labor unions. Following Citizens United, the group that jumped up to the top were investment bankers.

Farron Cousins:                  They now, now trial lawyers and labor unions keep falling further down that list and it’s all corporations. We got defense contractors jumping up in there, but, but the big banks, the pharmaceutical companies, they hold the key there. So you might think, okay, well we’re not going to take money from these companies that are destroying the planet. Great for you. What are you going to do about…

Mike Papantonio:             What about pharmaceuticals? About Wall Street.

Mike Papantonio:             About DuPont, about DOW, about Monsanto, you know, I could go on forever and it’s almost as if they’re trying to say, well, you know, we’re just not like them. No, they are like them.

There’s no difference between them and them. It’s the same thing. And so here you got this ploy. Well, you know, we’re not going to take any money from the fossil fuel industry. I got to tell you something. If you really, if you really believe in either one of these parties, Democrat or Republican, you know you have responsibility. Don’t you think? To say really, you know, we saw the shift take place where the Democrats, right?

Unfortunately Joe Biden is, you know, he’s the presidential guy. Look at that guy’s papers, man. You talking about Wall Street Democrat he’s has got it all over him. So and then, but we have to be honest about that. We have to say, okay, there’s a shift that’s taken place. It’s an, it’s a shift. Maybe you aren’t, you know, maybe you’re not that Democrat that you used to be, but you’re not, don’t make stuff up and make it sound like you are because that’s what happens. You have these people that they stop asking questions about the very party that they’re, you know, that they are tied to. Republicans or even, I don’t know, I think they’re worse. You know, I think the worst because Republicans don’t have anybody who will criticize Republicans when they do awful Republican things.

Mike Papantonio:             Democrats do. Me and you, you know, Cenk Uygur, I could go on forever about people that say, you know, let’s call it out and call it out. So I don’t know this story to me, when I saw it, I got to say be real. You know, we know that that’s nonsense.

Farron Cousins:                  Well what is interesting too, because it’s like they came out and said, you know what, we’re no longer gonna kick puppies. Oh my God. Were you, were you kicking puppies? Well, no, but we’re just, we’re going to make it official.

Farron Cousins:                  And also just to add real quick, they’re still going to take money from people that work in the fossil fuel industry, which could include CEOs and shareholders just not from the corporation itself. If it comes a Super PAC.