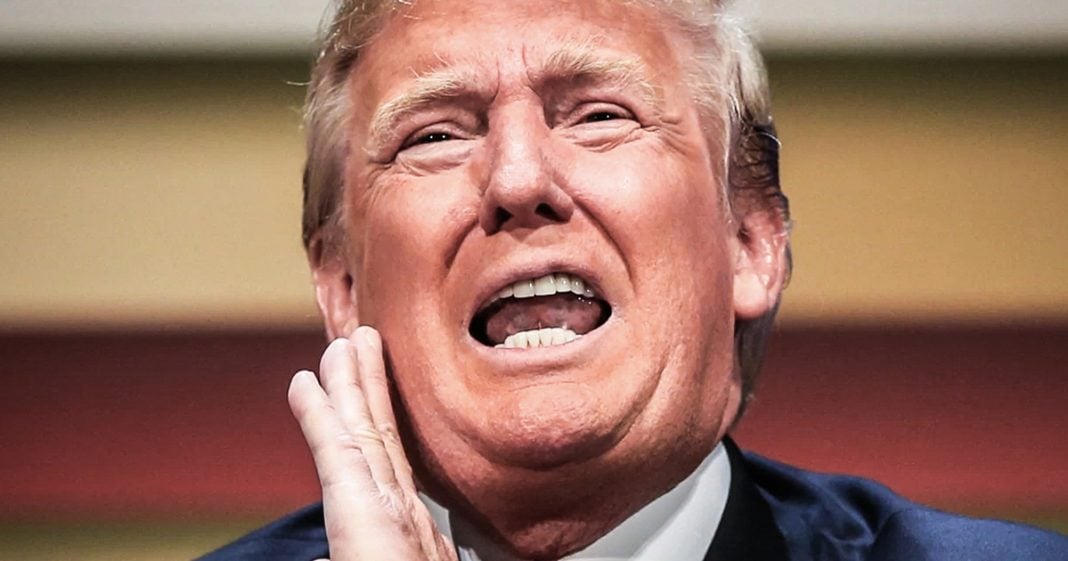 According to White House officials, Donald Trump is becoming increasingly withdrawn, angry, isolated, and is watching WAY more TV than usual as everything around him continues to fall apart. As the President detaches from reality, he becomes more and more prone to dangerous decisions, and we’ve seen the results of those decisions in the last few weeks. Ring of Fire’s Farron Cousins discusses this.

You know, every couple weeks we get one of these new reports, Donald Trump’s growing angrier than ever. Donald Trump’s more isolated than ever. And of course this week didn’t disappoint Donald Trump, according to a new report in the New York Times, is increasingly isolated, growing more and more angry and watching more television than ever, which I gotta be honest with you. I didn’t know that was possible. I mean, if you spend 24 hours a day actually watching television, I didn’t know it was somehow possible to even watch more television than that. But apparently Trump has found a way to do it. Uh, the report says that Trump has leaving Fox News on while in important meetings, you know, national security advisors, economic advisors, all kinds of things. But instead he’s tuned into the TV, not listening to what the advisors are saying, but instead, taking the advice of the idiot box. And here’s the problem.

We have already seen the results of this over the last few weeks when Donald Trump decided to send out a tweet about the Fed. That then resulted in a massive stock market crashed the biggest in the history of Christmas Eve. He did that by himself because he’s not listening to his advisors. He’s listening to the television. He’s growing, increasingly isolated. The report says, because of all the chaos around him, he doesn’t know who to trust. He’s lashing out at aides, calling them idiots in the middle of meetings according to people inside the White House. So what’s left really, I mean, we’re already see how horrible this man is when left to his own devices, when he doesn’t listen to the people in his Oval Office who granted are not smart people, but they’re still smarter than him. I mean his decision to pull out of Syria was the right decision, but he did it the wrong way and he did it in a way that pissed everybody off.

A lead to James Mattis resigning and then he got mad about that and decide to make Mattis leave earlier than February, which is when he wanted to. It’s chaos. It’s anarchy and it’s all because of Donald Trump’s personality. He has to be right. He has to be the guy to make the decision and he thinks he is smarter than everybody in the room. No matter which room he happens to be standing in, nobody knows more than Donald Trump, which is why our economy kind of tanked and right now kind of crumbling down. It’s why our foreign policy is in shambles, not because he decided to pull out of Syria, but because we’re still involved in so many other conflicts and we’re not doing so great. Also not to mention the little Christmas photo op he did with the seal team five where he, oops accidentally tweeted out the picture that gave up their location and identity, putting them all in danger.

This man is an absolute threat to the United States and not only because of what he’s intentionally doing, but because he’s so damn stupid with what he’s doing. You know, there is a fine line between just brazen in competence and absolute stupidity, but this president seems to be straddling it and getting the best of both and unfortunately the best of both is absolutely wrecking this country. It’s wrecking our economy. It’s wrecking our foreign policy. It is wrecking everything and as it continues to happen, as the investigations continue, as the resignations mount, as the economy continues to falter, the stock market with its wild ups and downs, things are going to get worse and the president is going to make more bad decisions. He’s not listening to anyone other than the idiots on Fox News. They are his advisors, even if they don’t meet with him personally or speak with them on the phone. They are the ones giving him advice and anyone who would wish to do harm to the United States sees that, recognizes that and understands that that is the best way to get to the president and that is dangerous. He has played his hand for the entire world to see and that is not something that any president should ever do, but again, straddling that line between incompetence and blatant. Stupidity is the only thing that Donald Trump seems to do exceptionally well.